In the light of the coronavirus pandemic, it has never been as important as now to grow your own veg. We don't have a shortage of vegetables just now (though going out to buy them comes with a degree of risk), but there's a very strong possibility of a shortage in a few months' time, because probably fewer of them are being sown / grown due to labour shortages, and the same shortage will most likely come into play at harvest time. Of course the UK's problems will be exacerbated by the Brexit situation, since many of our fruit and veg-farmers have been relying until recently on seasonal labour from the EU. My goodness, what a mess!

Still, I can't personally influence any of that, so I'll concentrate on doing what I can influence - trying to squeeze as much veg as possible out of my garden. To that end, I have put in place the wherewithal to grow some more beans. Last year I had some success with growing Borlotti in a re-purposed plastic crate, so this year I'm using the same technique, but smartened-up a bit. I have recently bought some more big plastic pots from LBS Horticultural, including a couple of 60-litre ones.

One of the 60-litre pots is going to be used for growing gherkins, but the other is going to host the Borlotti. I have installed it at the bottom of the garden, filled it with soil (I can't spare any compost just now), and fitted it with four tall Hazel bean-poles. 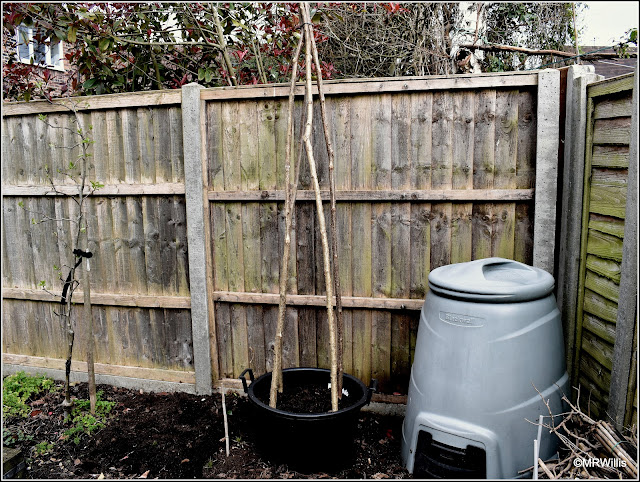 The Hazel rods are some of that batch of 30 that I bought last year from a local "Coppicer and hurdle-maker". I had originally intended to use them for supporting Tomatoes in the 35L pots, but they proved too unwieldy for that purpose (they are mostly about 6' 6" tall and quite thick). However, they make really good bean-poles. I'm sure that bean plants find them easier to grip than the smooth bamboo poles that most people use.

I shall be sowing the Borlotti seeds in the middle of April, with a view to planting them in that pot in early May. Because Borlotti are not frost-hardy, I'll sow them in pots so that I can keep them under cover when necessary, since we usually get some very cold (possibly frosty) nights at this time of year.

Moving on from the Borlotti... After planting-up my main patch of Broad Beans, I had several spares, which in normal circumstances might have been given away or composted. This year I feel I need to use them, so a short distance from the "Borlotti-pot" I have done this: 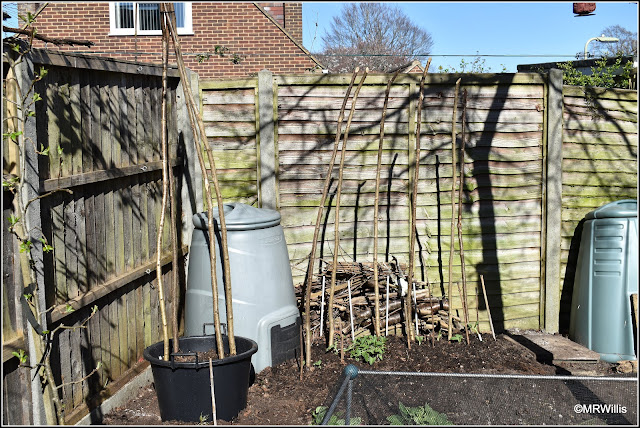 In front of the log-pile (insect refuge) I have put a line of poles, and planted 8 Broad Beans at their feet.  The beans are "Imperial Green Longpod" ones. 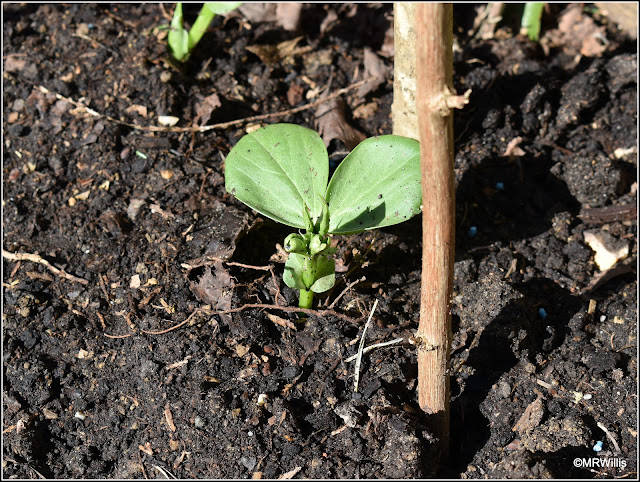 Before I finish today I just want to make mention of some other plants that are growing in that corner of my garden, using this photo to help me: 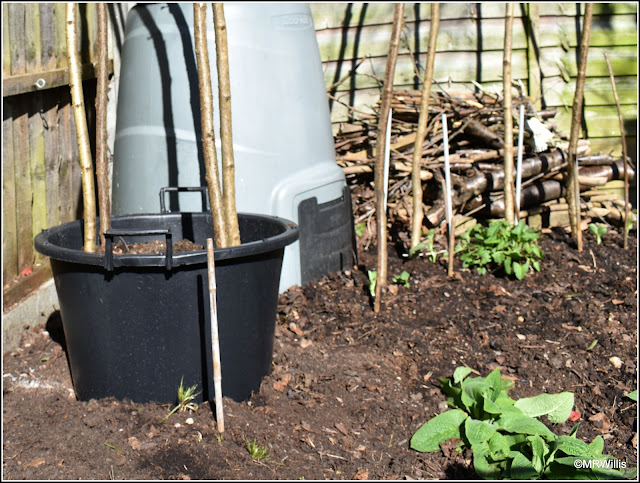 In front of the big black pot, marked with a short cane, you might just be able to see the first shoots of the Horseradish poking through the soil. At bottom right of the picture are some leaves of Comfrey (which will in due course be used for making plant-food), and then in the distance (at the foot of the poles) is a clump of Good King Henry. Here's a closer view. 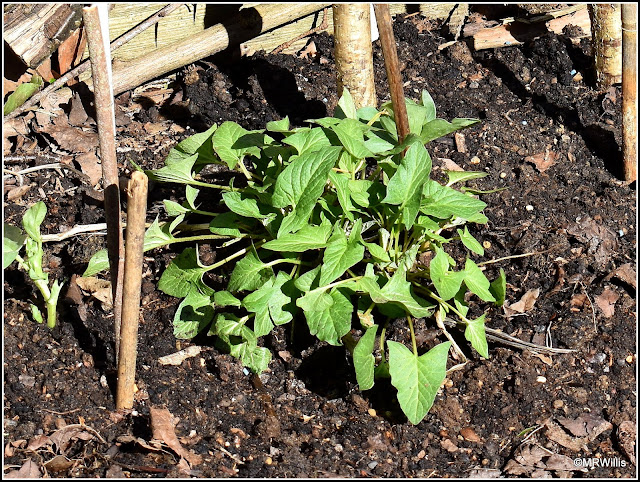 Good King Henry is a herb that is often advocated for use in lieu of Spinach, eaten raw when very young, and cooked when older. I have had this plant in my garden for many years (it self-seeds very readily), and did try eating it when it was new to me. However, we found it to be almost tasteless and not very appealing to eat. In current circumstances I feel I should perhaps nurture this clump rather than dig it up, because who knows when we might be glad of ANY fresh veg, tasteless or otherwise - I'm assuming it has some nutritional value!