For the last ten days or so we had have glorious weather - sunny most of the day, and unusually warm - so I have introduced my young chilli and tomato plants to the Great Outdoors a bit earlier than I had expected to do. 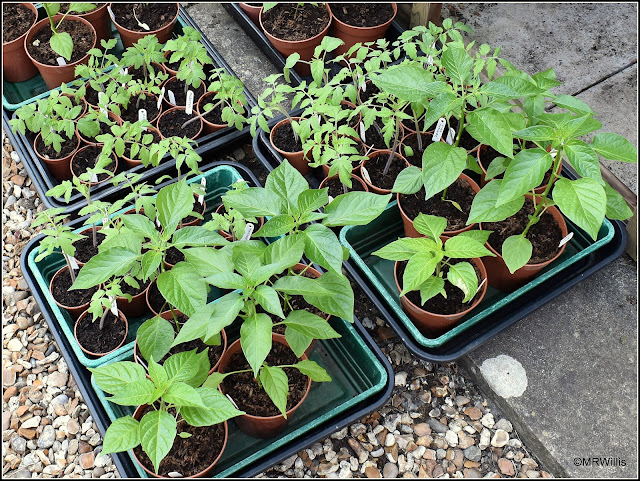 This is probably the most risky time of the young plants' life. If they are put outside when it is too cold they will suffer a severe growth-check, and may die, but if they are exposed to extreme heat or too much bright sunshine too early, they may get scorched and lose some of their leaves - of perhaps get completely "fried"!  Because I'm aware of this, I took my plants outside for their first taste of fresh air on a day when it was relatively dull, and only left them out for a couple of hours. Since then I have left them out for progressively longer periods, and have had them in the full sun for only part of the day. I'm still bringing them indoors at night-time though. Once the night-time temperatures are reliably in the 8/9/10C range, I'll be happy to leave them out for the full 24 hours, though I'll probably have them in the coldframe for the first few nights. [I'm sure most of you will know this, but gardeners call the procedure I have described "hardening-off".] 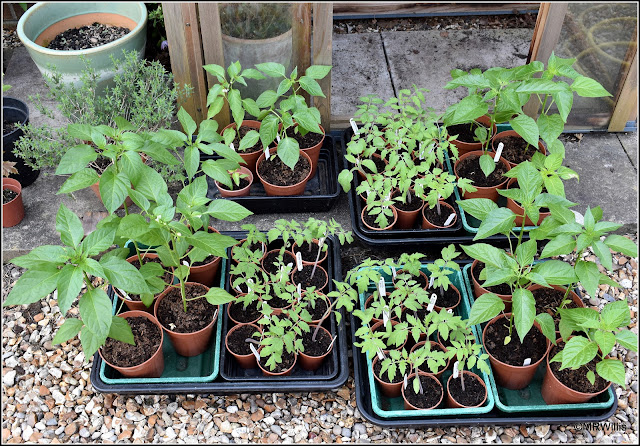 This year my chilli plants are looking particularly good. I said that this time last year too, but soon afterwards I re-potted the plants into bigger pots, and used some commercial compost which turned out to be contaminated with the awful aminopyralid weedkiller that has plagued my gardening efforts so badly for the last several years, and the plants suffered terribly. This year I will be using the same compost for potting-on as I have been using since the seeds were sown. This is partly due to the difficulties of buying compost of any sort during the Covid-19 lockdown, but not entirely so. This time I am using the SylvaGrow growing medium, for a variety of reasons: it is peat-free and thus better for the planet; it was good value (3 x 50L bags for £16 at my local garden centre before the lockdown started); and it's not made by Westland or Levington! These two companies (and Corteva, manufacturer of the evil weedkiller) have been the chief culprits in the contaminated compost saga, and have been largely dismissive when I have contacted them to discuss the issue, as I have done several times now. I also have to say that the Health and Safety Executive, who are responsible for policing this issue, have also been conspicuously ineffectual. They make the right noises when you contact them, then do nothing! 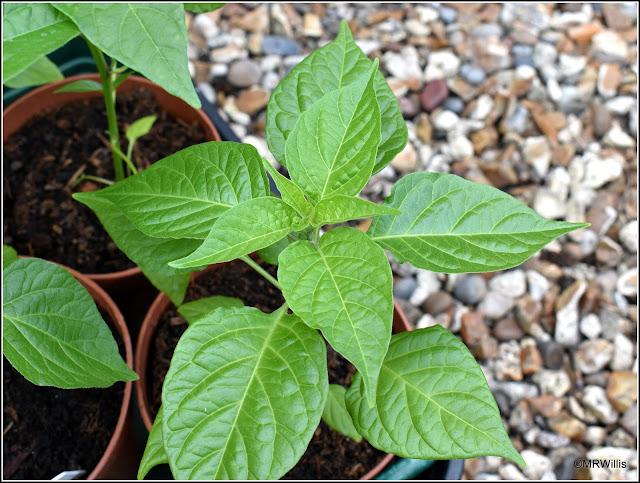 Another reason why my chillis are looking healthier than usual this year is that they have not been infested with aphids. I attribute this to the fact that this time I did not over-winter any of my plants from last year. I have now decided that bringing mature chilli plants back indoors is a bad idea, because I'm sure this is where all the aphids come from. Even if the plants have no visible aphids on them, I reckon there will usually be aphid eggs lurking on them or in their soil somewhere. This year's chillis, untroubled by aphids, are growing rapidly and already producing flowers - and I think, some fruits: 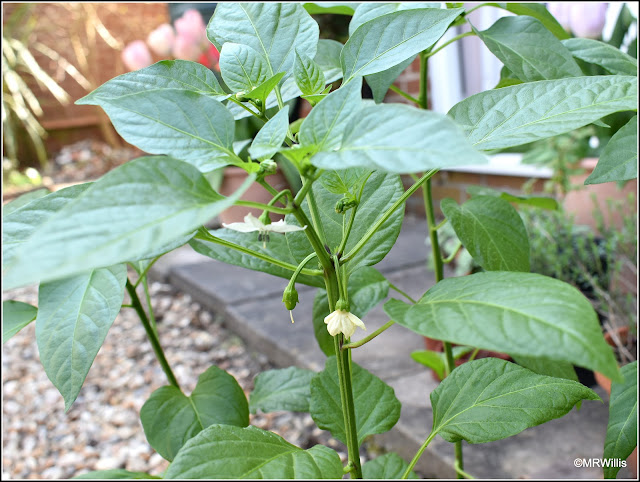 My tomatoes are a couple of weeks behind the chillis in terms of development, simply because I don't sow them until the chillis are ready to vacate the Growlight House in which they are kept in their early days. To be honest, I think they look quite pale and they are a little "leggier" than I would like. This may be a consequence of the compost / growing-medium, which may possibly not be ideally suited for raising plants from seed. They are definitely OK though, and I'm not unduly worried about them. 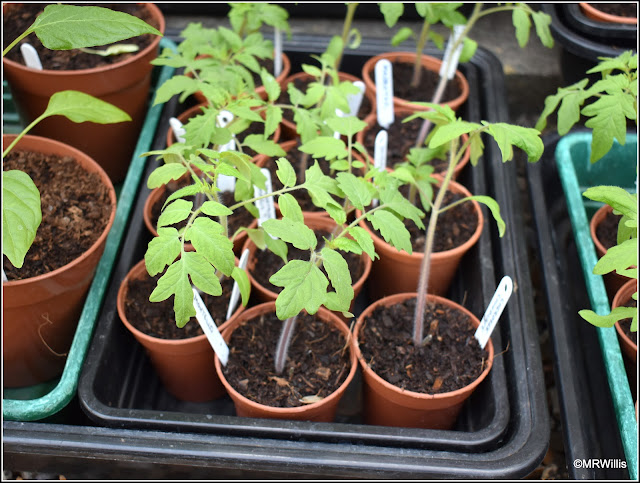 I'm being very careful to avoid stressing them too much by not taking them outside unless the conditions are just right. It's hard to believe we are still only in Mid-April; the weather makes it seem more like late June!
Posted by Mark Willis at 12:00