For the last couple of weeks I've been toying with the idea of getting my carrot seeds sown, but I have delayed for two reasons: first, because the bed in which I wanted to sow them was still occupied by the last of my over-wintered salads (endives and chicories), and second because the weather has been too dry and too cold. I know from experience that carrots seeds can be very reluctant to germinate if their soil is not moist enough. Both of these obstacles have now been removed. I harvested the salads, washed them and put them in Stayfresh bags in the fridge, where they will last for up to 10 days. And then on Sunday night we had our first significant rain for ages - enough to wet the soil quite nicely - and it happened in the night too!


So, on Monday the task was done. I used my normal technique, which involves raking the soil to a fine tilth and then making the required number of shallow drills by just pressing the handle of my rake into the soft soil (fortunately the rake head can be detached from the handle). 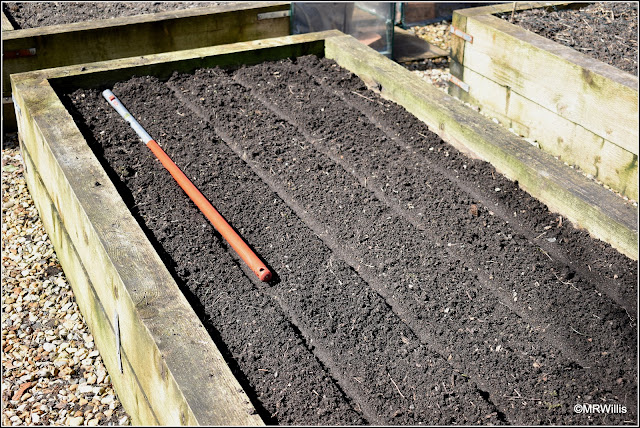 I've mentioned previously that my plan was originally to have one bed each for carrots and parsnips, but I adjusted that plan because of the need to grow all sorts of other things to get us through a possible shortage of fresh vegetables caused by the current pandemic. I made four drills - three for the relatively quick-maturing carrots and one for the slower parsnips.

I have chosen three quite different types of carrot. I have one row with a mix of "Harlequin" (multi-coloured) boosted with some "Purple Sun" (purple, obviously!). Then I have one row of the medium-sized "Nantes", and finally one row of the big maincrop variety "Autumn King". Hopefully they will mature at different times and keep us supplied for several months. The single row of parsnips is sown with "White Gem". I'm really hoping for success with these, because last year I had a complete washout with parsnips. None of them even germinated, despite my having done two sowings.

Before sowing I water down the length of the drill, using a watering-can, to ensure that the seeds sit on moist soil. I sow by hand, trying to space the seeds fairly thinly though I accept that I will need to do some thinning-out later on. Then the seeds are covered with a layer of dry soil and patted down to ensure good contact between seed and soil. Then I apply the protection... A bed like this, newly raked, is in grave danger of being dug up by our local badgers and/or foxes unless protected, and the Blackbirds would have a field day! So I construct a frame of aluminium rods joined together with some of the Build-a-Balls. 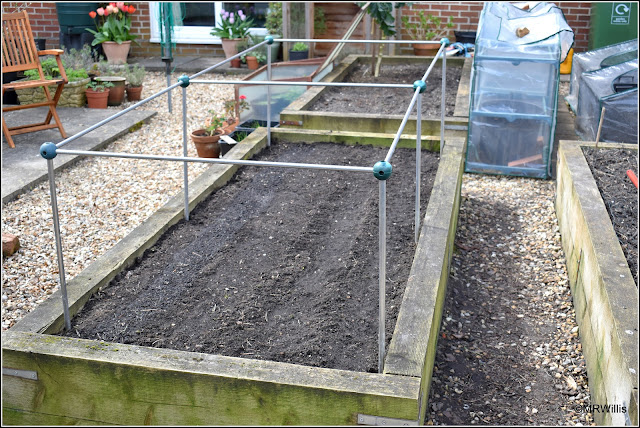 Once the frame is in place I drape a net over it. This net has a mesh of about 5mm square, so it won't keep Carrot Root Fly out, but it's easy to see through when I'm checking for germination. When the seeds germinate I will replace it with fine-gauge Enviromesh. 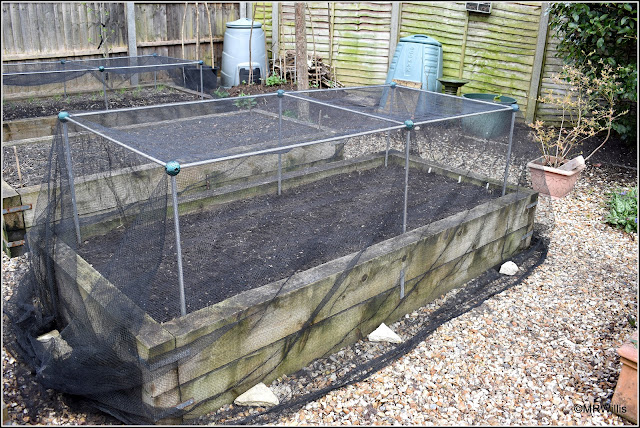 The weather forecast for the next 10 days shows a lot of sunshine, temperatures warm for this time of year, but very little rain. I can see that shall have to water those seeds a few times, otherwise they won't germinate!
Posted by Mark Willis at 07:00