I normally plant the first of my potatoes in mid to late March, so it's nearly time to do that. For the last two months my seed-potatoes have been chitting in preparation for this. "What does chitting mean?" I hear you ask. Well, it means this >>>> 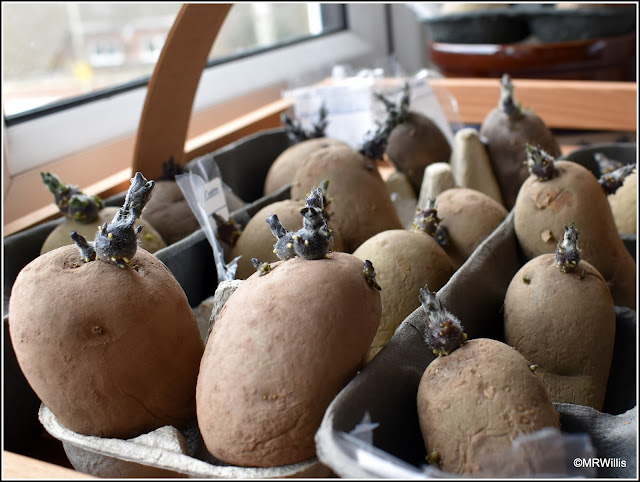 Chitting is the word used to mean the formation of stem shoots on the seed-tubers. It's a way of accelerating a potato plant's growth, because a seed-tuber that has been chitted will develop its stems more quickly once planted than one which has not been chitted. The practice is not strictly necessary, but it's a technique used by gardeners for many generations and still used by most amateur growers.

To produce good strong chits / shoots, the seed potatoes should be placed in a cool light place. If they are too warm or too much in the dark they will produce pale spindly shoots. Mine have been on a windowsill in an unheated spare bedroom, aka junk-room! This is the sort of chit I aim for - sturdy and dark-coloured. 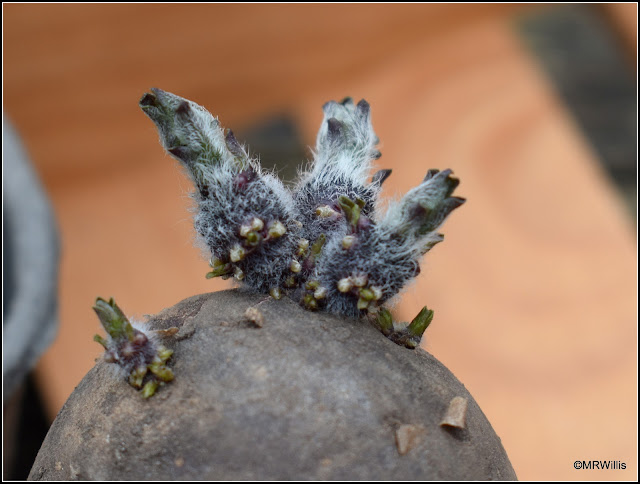 Most of the shoots on a potato appear on the so-called "Rose" end - the end furthest from where the potato was originally attached to its parent plant. In order to give the chits the best opportunity to sprout, many people like to put their seed-tubers in egg-boxes or something similar which can support them in a suitable stance with the rose end uppermost. 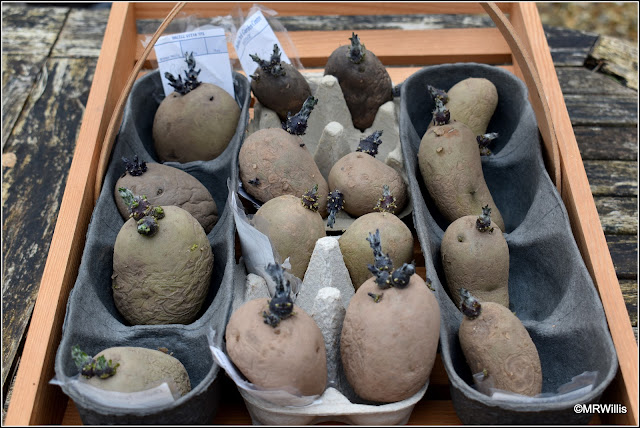 I have found that sometimes egg-boxes are too small to accommodate the bigger tubers, and I have acquired a couple of long containers with four larger compartments, which are ideal. These originally held Persimmon fruits, bought from a supermarket.

So anyway, I reckon that my potatoes are ready to go whenever the weather is suitable. I've been looking at the 10-day forecast and I reckon I might be planting this coming weekend. I'm not too worried about frost, because my spuds will be planted into containers, protected in their early days by little plastic green houses. I want good weather for planting for selfish reasons - I don't want to get cold and wet while doing it!