Some people pinch out (remove) the growing tips of chilli plants, which allegedly makes them bushier and perhaps more vigorous. I don't normally use this practice, but this year I thought I'd give it a try. This post describes the results of my trial.

I find that most chilli plants naturally branch out when they get to about 30 or 35cm tall, like this one: 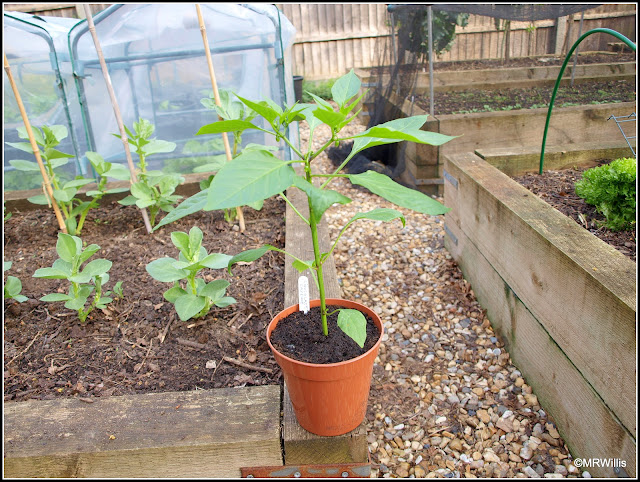 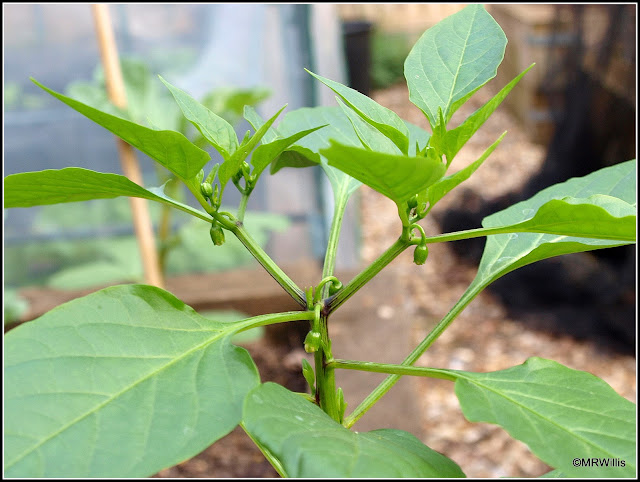 This year I did a comparative trial with three types of chilli - "Aji Limon", "Aji Benito" and "Cayenne Long Slim". In each case I pinched-out one plant and left the other to grow naturally.

Here's one that has been pinched-out. You can see that the plant's immediate response is to channel its energy into producing new growth at the leaf axils. 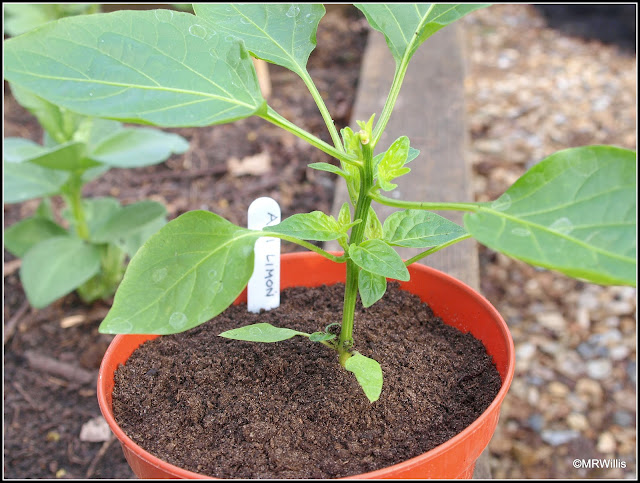 Over the growing season I treated all my chillis in exactly the same way - watering them when I felt they needed it, but not too often or too copiously, and once fruit had begun to set I fed them weekly with proprietary tomato food ("Tomorite").

Due to problems I encountered with weedkiller-contaminated compost (described elsewhere on my blog) the chillis got off to a very poor start. However most of them eventually recovered and they produced a good number of fruits, which are just beginning to ripen - which is about 3 weeks later than usual.


However, the experiment with pinching-out reveals that this practice makes very little difference! Here we see two "Aji Benito" plants side-by-side. The one on the right was pinched-out, and the one on the left was not. 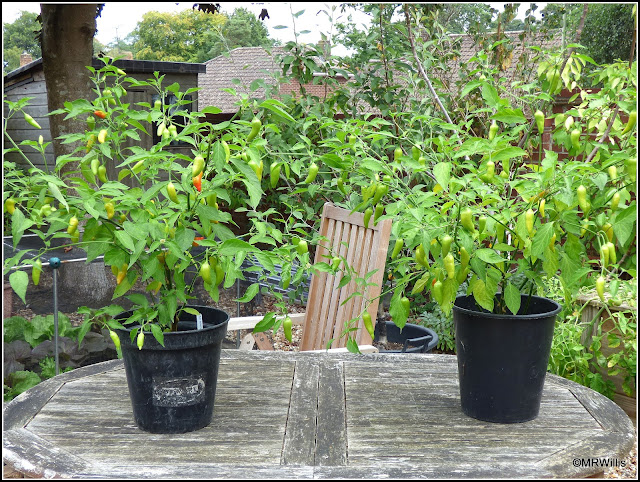 Allowing for a little bit of natural variation, I believe that they are very similar in shape, structure and yield. A more interesting comparison can be made when I introduce a third plant of the same variety - one which was over-Wintered from last year. It is the middle one in this next photo. 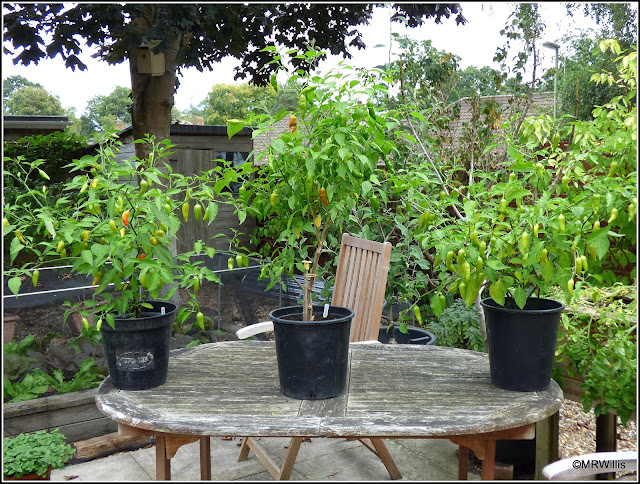 You can see that the over-Wintered one is taller and its leaf-cover is much denser. If you were able to look more closely you would see that the main stem is also much more robust and woodier, which presumably gives the plant greater ability to support foliage. I would also say that the fruits are probably more numerous and slightly bigger, though most of them are behind those of the other two plants, in terms of ripeness. 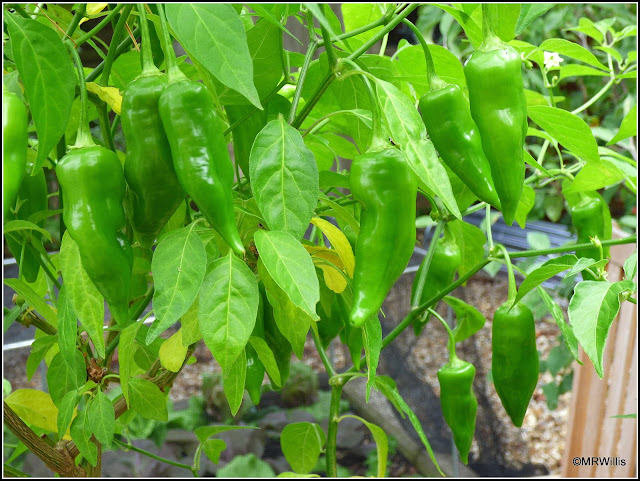 The "Aji Limon" plants have performed in similar fashion: no appreciable difference in overall size or in number of fruit.


However, I thought it might be useful to show you how the pinching-out altered the structure of the plants. This photo shows the Aji Limon" plant that was pinched-out. It has no dominant main stem and all the side branches are low down on the plant. 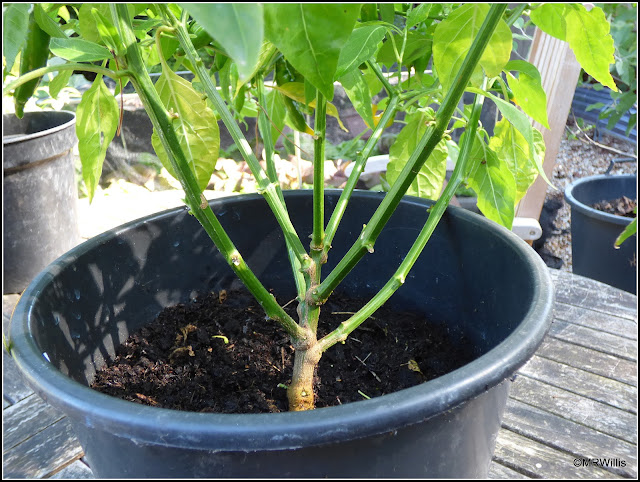 The unpinched one on the other hand does have a dominant main stem, and its branches are spaced further apart on that stem. 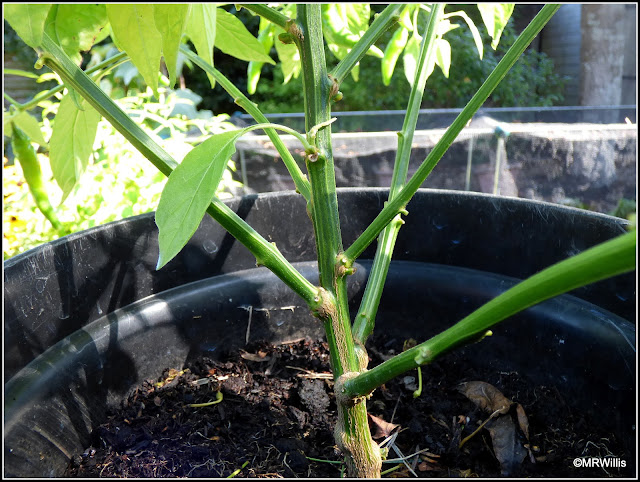 Overall though the total number of branches and their robustness is very similar in both plants. I suppose the pinched-out one is marginally more compact, but I believe that if I had wanted a more compact plant I could have achieved this by much less drastic pruning. I sometimes do this anyway. If a plant is looking too straggly I trim off the tips of some of the branches. Where the cut is made two smaller branches form.

I won't bore you with photos of the third variety - "Cayenne Long Slim" - because the results were the same. Indeed I had three plants of this variety and they are so similar that I had to look at the labels to tell which was the one I had pinched out.

In conclusion, my experiment has convinced me that there is no special merit in pinching-out chilli plants, but no damage is done either. In future I propose to let the plants "do their thing" naturally, as I usually do.
Posted by Mark Willis at 12:45