Chillis - a contrast in styles

Regular readers will be well aware that I'm a keen grower of chillis. However, they may not know that we (my wife Jane and me) do not actually eat huge quantities of chillis. We do enjoy a bit of Sweet Chilli Sauce on our Chinese fried rice, and we do occasionally put homegrown chillis in curries, soups and salsa, but we're not fanatical about it (unlike some I could mention...!). Furthermore, neither of us likes the blisteringly hot types of chilli, the so-called Super-hots.

The only chilli I'm growing this year that could conceivably be considered a Super-hot is this "Paper Lantern", and even this would be considered pretty tame by the standards of many chilli fanatics. 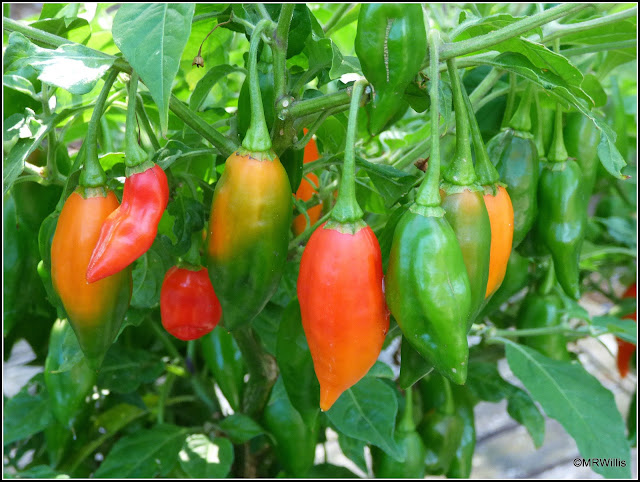 "Paper Lantern" is one of the Habanero types of chilli (botanically a Capsicum chinense) and its fruits are generally rated in the region of 300,000 SHU. [Scoville Heat Units]. Compare that with about 1,500,000 for a "Carolina Reaper" or about 5,000 for a "Jalapeno".

I wouldn't normally enjoy eating  "Paper Lantern" or indeed any other Habanero chillis - though I do admit that one is a nice ingredient for a Caribbean curry - but I just like the look of them. The teardrop shape of this particular variety is very attractive, and I also like the way the colour gradually spreads through the fruit as it ripens, often creating a sort of Red-Amber-Green traffic-light effect. 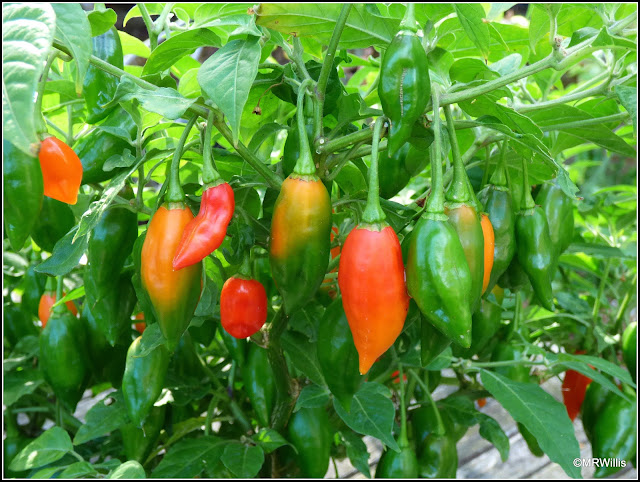 Towards the other end of the heat scale is this one, the "Hungarian Hot Wax". 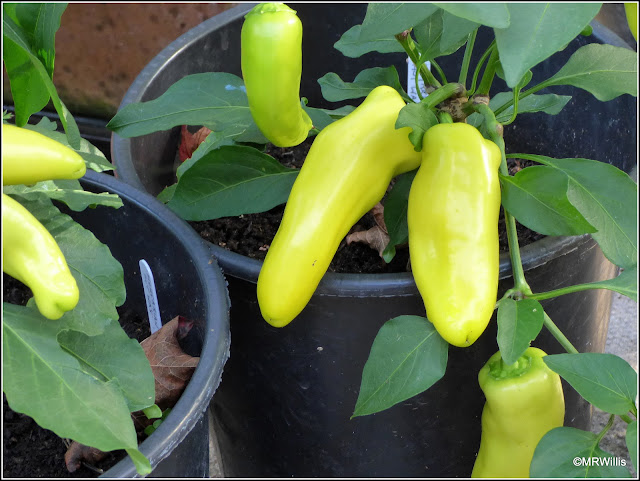 Even though it looks more like a Sweet Pepper, it's a mild chilli, rated anywhere between 1,500 and 15,000 SHU. (It's surprising how much sources vary in this respect). The ones seen here are immature, and they will eventually turn orange and finally red and they get hotter as they ripen. We like to eat them as they are just going from yellow to orange, because at this stage they have only a little heat but plenty of flavour. I particularly like them cut into segments and then stir-fried until slightly black at the edges. 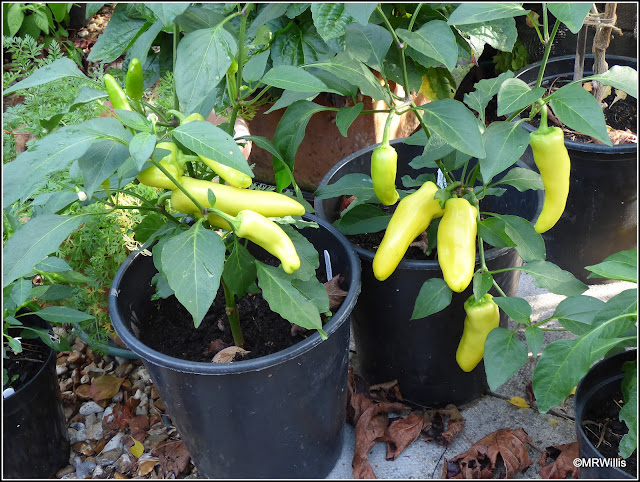 I have two plants of "Hungarian Hot Wax" this year. They were both very badly hit by the contaminated compost affair and at one point I thought they were doomed, but they have bounced back very nicely and each one has several fruits.

The type of chilli that we enjoy most is represented by the ever-reliable "Cayenne", which is not only a prolific fruiter, but is also conveniently positioned in the "comfortable heat" bracket of the Scoville scale, coming in at about 30,000 to 50,000 SHU. 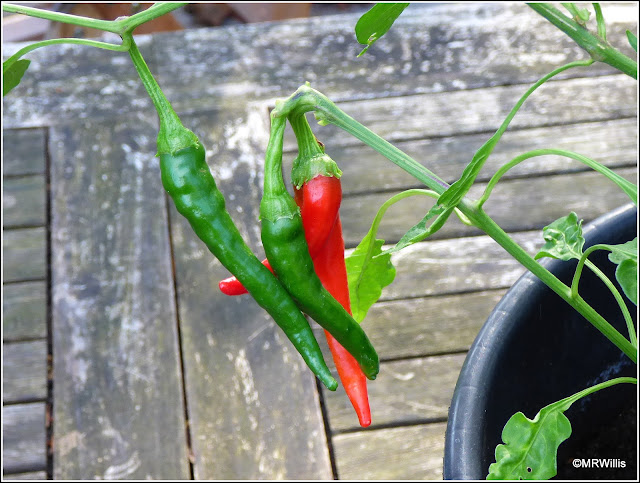 These photos show the unusual pair of fused-together twin fruits that developed on one of my plants. I find it very interesting that the twins have fully ripened before their nearby sibling has developed any colour at all. 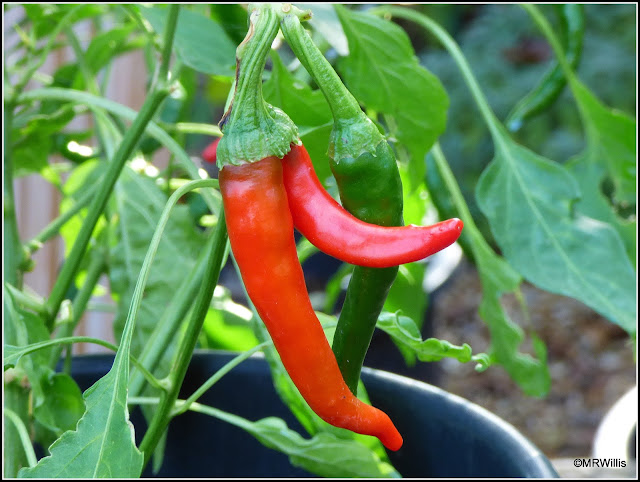 I have three plants of a variety called "Cayenne Long Slim" and one other plant simply called "Cayenne", which has produced some much fatter fruits, more on the lines of "Jalapeno": 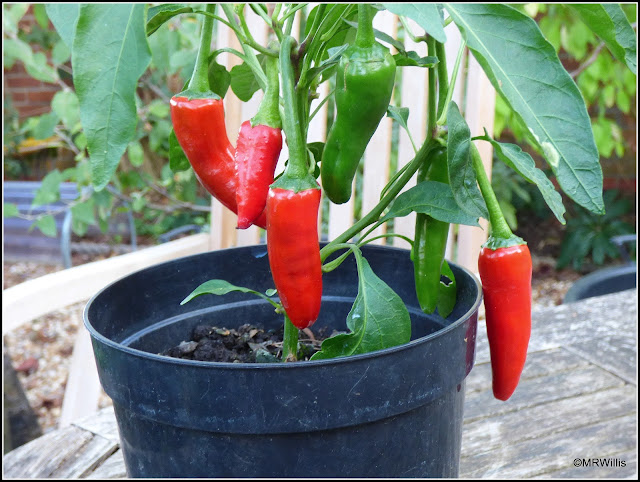 As well as the red ones, I have this "Golden Cayenne". It also has very chunky fruits, which are similar in flavour and heat level. 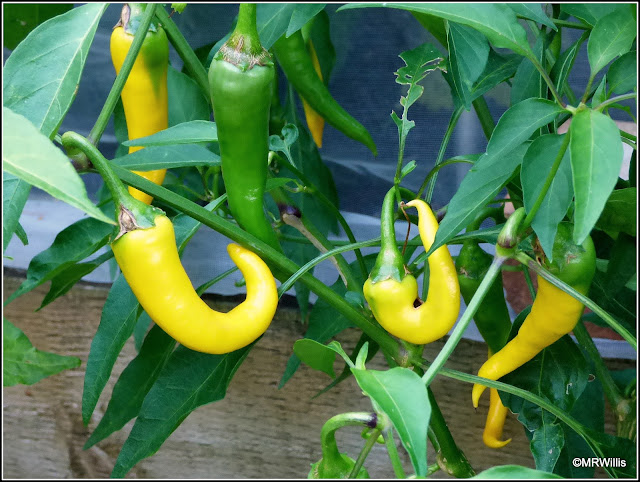 So, expect to see lots of chilli photos on my blog during the next few weeks!
Posted by Mark Willis at 14:00