Last weekend I attended the Hampshire Potato Day event at Whitchurch, and (unsurprisingly) came away with enough nice seed-potatoes for the needs of my new plot as well as my well-established home garden. It's not those that I want to write about today though, it's about beans - specifically Broad Beans.


Apart from potatoes, the Potato Day event sells plenty of other goods too, including some established plants, gardening sundries and seeds. Prominent among the latter are peas and beans. They are offered for sale by the half-pint, priced at £2. Each huge bin of seeds is equipped with a glass half-pint mug which you fill with the seeds you require and then tip them into one of the plastic bags that are provided. All very unscientific and charmingly low-key, based entirely on honesty and trust! 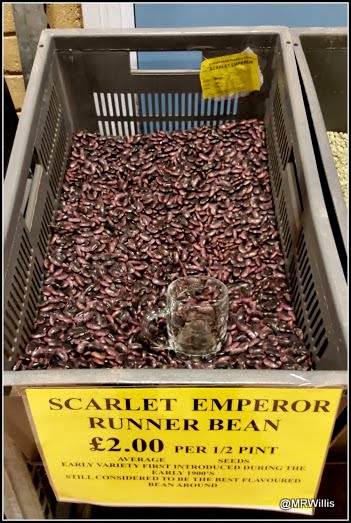 I was in the market for some Broad Beans, and I decided that since all the varieties on offer were the same price I would get a "mixed bag", so I filled my half-pint mug with a few of each of four different varieties. The ones I chose were "Witkiem Manita", "Imperial Green Longpod", "Bunyard's Exhibition" and "Crimson-flowered". The last two are varieties I have not grown before.


Just for curiosity, I weighed and counted my beans. There were approximately 150 beans, weighing 197g. For the sake of comparison, Suttons are selling 40 "Witkiem Manita" for £2.99, and Moreveg offer the same number at £1.50.

The only trouble is, I now have to sort out which is which! 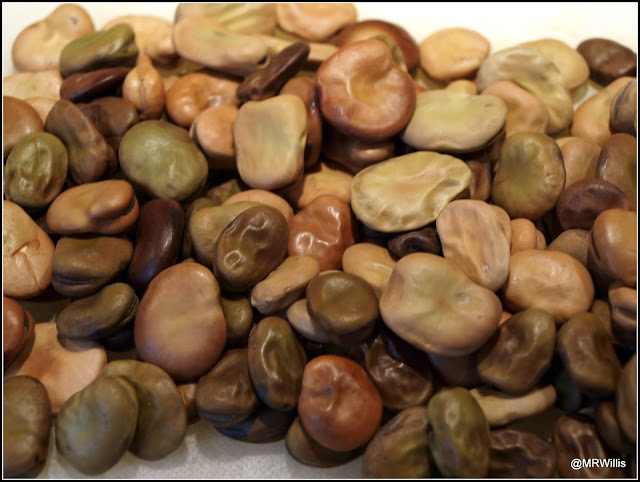 To be honest, I don't really mind which is which; I'll just sort them by size/ colour. I still have some "Witkiem Manita" left over from last year, so at least I'll be able to identify those. They are the red-brown ones.


Later... OK, this is the best I can do. Henceforward these beans will be known as Varieties A,B,C and D!
﻿

Having sorted them, I was of course keen to get on and sow some. It's a bit earlier than I would normally sow Broad Beans (normally this is a job for mid-February), but this year I have the luxury of the big wooden Gabriel Ash coldframe, so I reckon the beans will be OK in there.

I decided I would sow 8 of each of the types, making a total of 32, though I think I will probably only plant 5 or 6 of each. I always like to have a few spares to cover for any early casualties or no-shows. I sowed them in 3-inch plastic pots, filled with multi-purpose compost. Sowing Broad Beans has to be one of the simplest garden jobs of the year - you just push the bean into the compost with your finger, to a depth of about 2 inches. 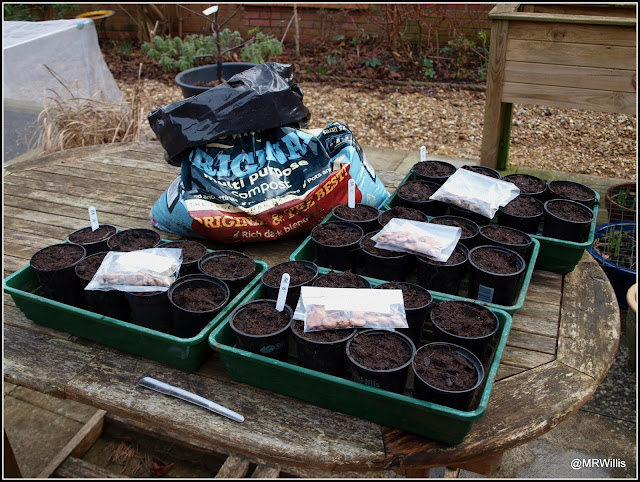 The shiny white things you see in the photo above are the bags in which I segregated the different varieties of bean: 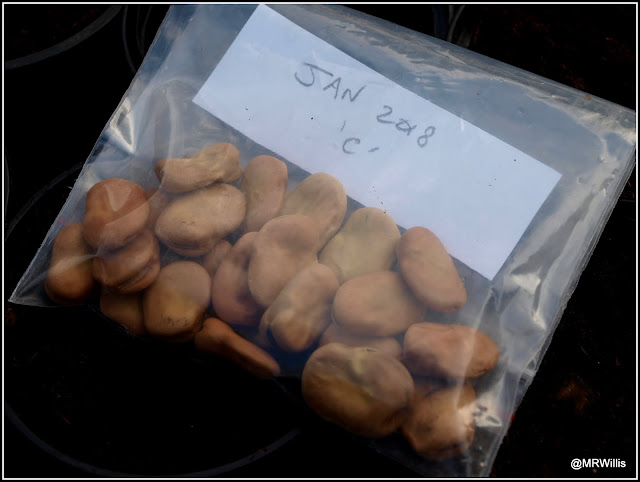 Right, so this year not only am I trying a few more varieties of Broad Bean than usual (and a couple that are new to me), but also I'm making an early start. Let's hope it pays off handsomely!
Posted by Mark Willis at 12:00