If I had to describe in one word how my plot looks right now, the word I'd choose is "bleak". It's almost colourless, and if it has any colour at all, that colour is grey. Very uninspiring. And it's still full of soggy leaves, though fortunately the wind has done me a favour and swept them up into piles - dropping me a heavy hint, I think! 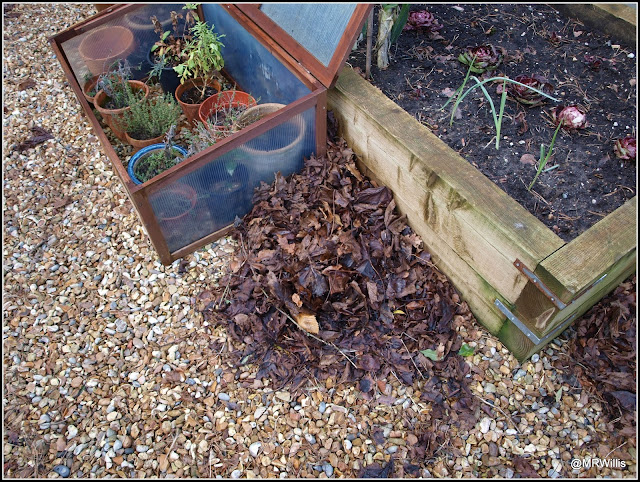 The bulbs are beginning come up in the borders now, but they have a layer of leaves to push through before they reach the light.. 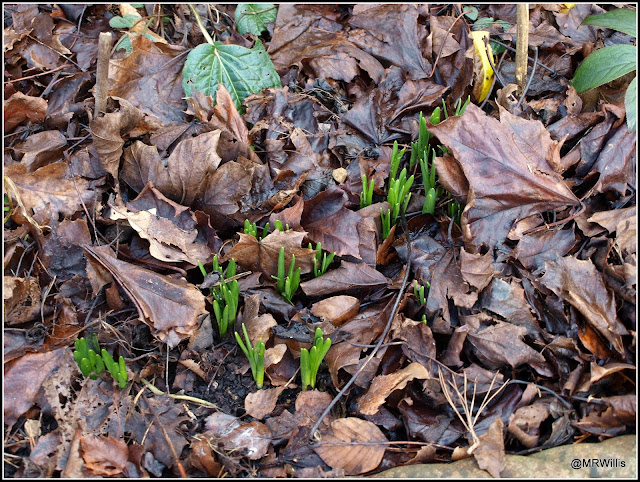 Looking at a garden like this can be very depressing, and I can easily understand how someone less keen than me would just give up and conclude that gardening is a mug's game!

However, I've been through all this before, and I know that by the end of January we are "over the hump" in terms of the weather, and from now on the general trend is one of improvement - longer days and gradually increasing temperatures. Indeed, looking more closely, I can find lots of encouraging signs already. For instance, after a very long wait, the Purple Sprouting Broccoli (one of my favourite vegetables) in nearing maturity:


I have one plant each of four different PSB varieties, which allows me to extend the cropping season to a couple of months at least.[Summer-maturing varieties are available too - I just haven't grown any.]


The biggest of the four is "Rudolph" (at the left in the photo above), which is supposed to be the first to mature, though it seldom is. At present it has lots of shoots forming, but they are a long way off ready still.


There are still quite a few Radicchio to be harvested. They have mostly been quite small this season, but I had lots of them so there has been no shortage of salad during the Winter. 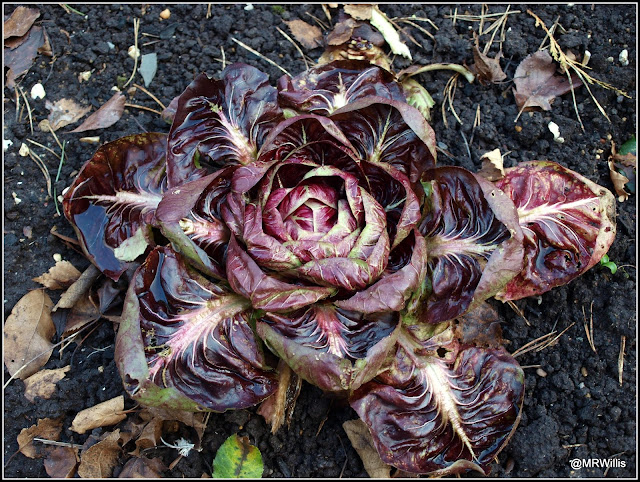 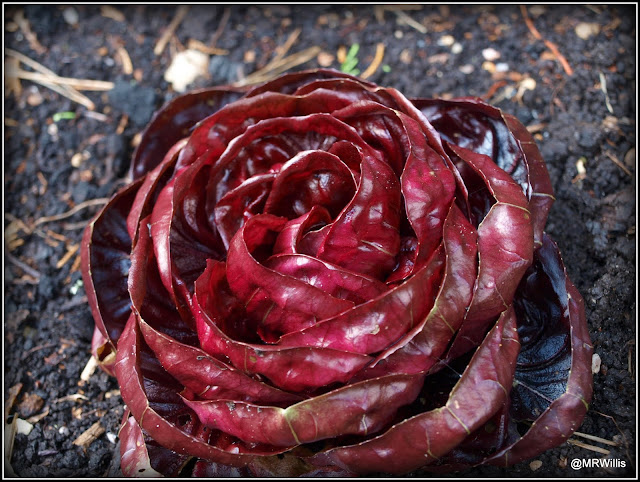 The Endives are nearly finished though. I'm surprised they have lasted this long, because they are usually killed off by a severe frost - and we had a few of those. 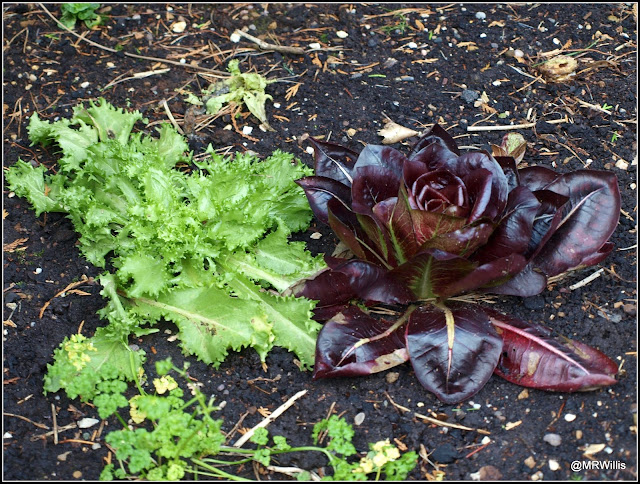 Still on the salad front, I have two pots of over-Wintered Lamb's Lettuce / Corn Salad. The plants are looking pretty bedraggled, but they're definitely alive. In the hope that they will soon begin to put on some more growth I have tidied them up and moved them into two of the plastic mini-greenhouses, for a bit of extra protection. I don't know why I didn't think of this before, because those greenhouses have been vacant since the last of the chillis went to the compost-bin in early November!


This is currently the most attractive of my salad plants - Watercress. 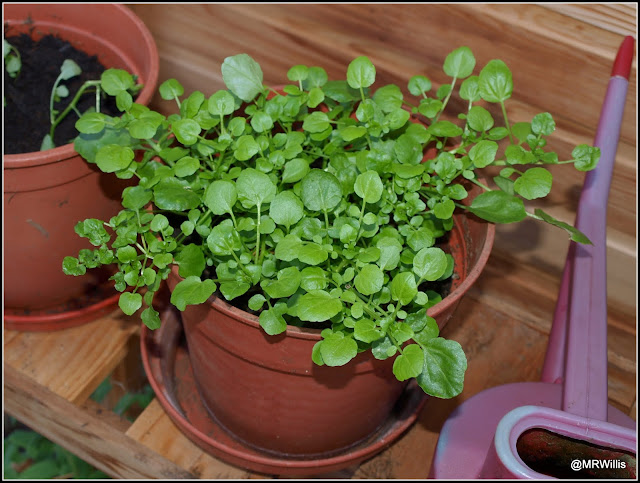 This particular Watercress has been grown from a few sprigs that I "foraged" from the nearby Basingstoke Canal. It is growing in very damp compost. We have already eaten some of it and I have also just planted-up another pot with a few sprigs taken from the first plant. As you can see from the photo, they currently have the luxury of a space in my big wooden coldframe - and seem to be making the most of the extra warmth that this provides.

I only have one pot of Leeks left, and I don't think they are going to grow much bigger, so I'm thinking they should be harvested within the next few days, even if they have to be "Baby Leeks" when presented in the kitchen. 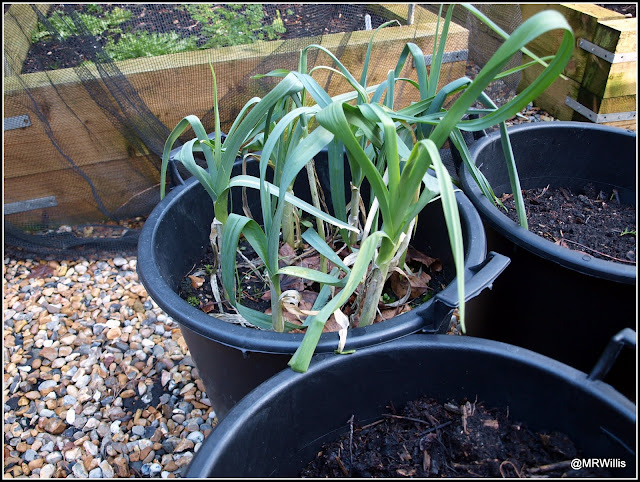 Another member of the Allium family is beginning to put in an appearance now - some very welcome clumps of Chives are popping up in the Herb border. They grow pretty quickly once they get going, so it won't be long before we can snip a few.

In similar fashion, the potted bulbs I planted in the Autumn (Tulips and Daffodils) are growing rapidly, and I shall soon have to remove the wire grilles that I put over them to discourage the "nocturnal diggers". 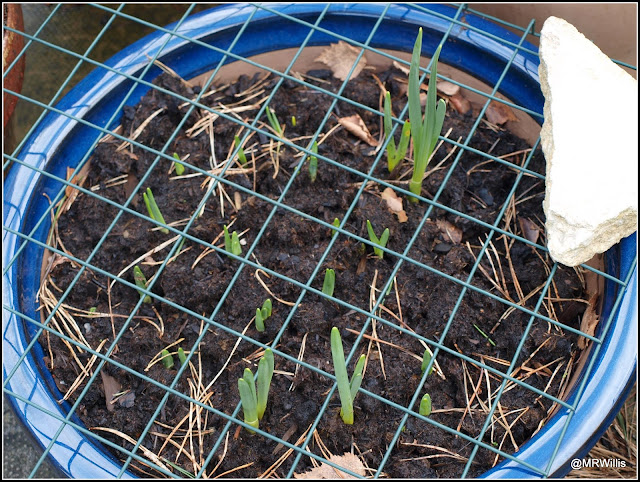 There aren't many flowers to be seen in my garden at present, but that will soon change because not only will those bulbs be coming into flower, but so will the Hellebores:


Hopefully there will be a better display of Hellebores this year, since I re-distributed quite a few self-sown seedlings last Spring. Hellebores self-seed very readily, and my stock of plants is therefore steadily increasing. It takes a long time for a Hellebore to produce flowers (usually at least 2 years after seed-germination - which can also take several months), so you have to be patient.

One tiny splash of colour is provided by this solitary Calendula flower, bravely blooming despite the adverse weather.


It will be a while before any of the potted perennials come into flower, but at least many of them have been protected from the worst of the weather in my two coldframes. 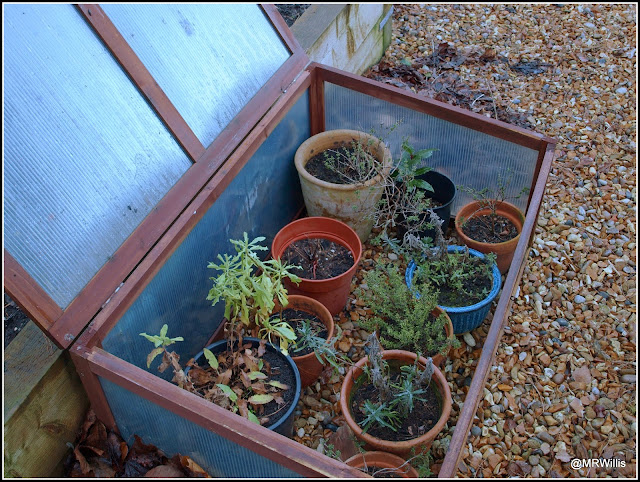 I'm trying hard to resist the temptation to get on and sow seeds, because I know full well that (with a few exceptions like Broad Beans and onions) it's too early for that. Seeds sown in January and early February often end up weak and spindly because they don't get enough sunlight. It's usually better to wait a few weeks. Plants from seeds sown later are usually stronger, and usually catch up the ones sown very early, so most of my seed-sowing is done in April.

Right now my priority is on tidying-up the garden - removing old leaves, twigs and miscellaneous debris - and I really must empty my other compost-bin. I need the compost for the raised beds, and I need the space in the compost-bin for all those old leaves!
Posted by Mark Willis at 12:00