Each week I spend a couple of hours at my new plot at Courtmoor Avenue. At present, the work is almost entirely "ground-preparation", i.e. digging.

Is that shed (the Finishing-line) getting any closer? 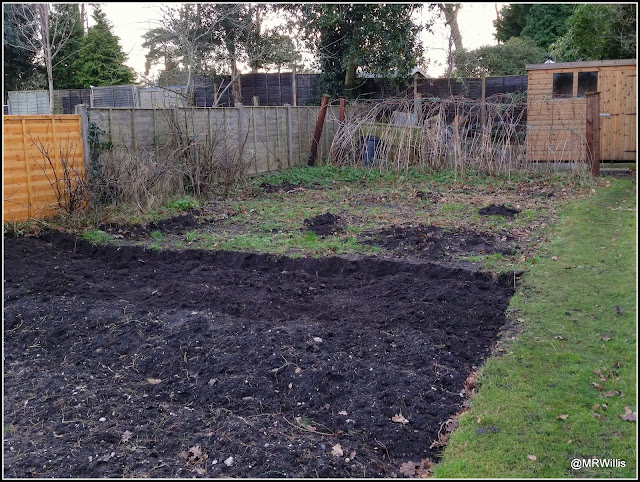 I'm trying not to do too much at each visit, taking it at a steady pace and digging a strip about a metre or a metre-and-a-half wide each time. At this rate the digging will be complete just in time for planting to begin.


Since my last visit the garden of the neighbouring property (which has recently changed ownership) has been completely re-vamped. It had been very overgrown, full of  neglected shrubs, broken garden furniture, bits of wood, children's toys etc. Now it is immaculate - stripped of all the rubbish, levelled and covered almost entirely in newly-laid turf. I wonder how much that cost? The broken fence-panel has been replaced too, which is good. I just hope that whoever did the garden makeover made an effort to remove as much as possible of the couch grass which was formerly so much in evidence - and which is doing its best to infiltrate under the fence into my plot!

As I have been working my way along that fence I have become aware of just how many mature fruit bushes there are. They look pretty neglected, but I don't think it would take much to revitalise them. If I can get the digging done in time, I might have a go at the bushes too.


Since I have freed them from the weeds that had been obscuring them they are now much more accessible and although they need some serious pruning, I think that I could probably get them back into decent order in a couple of hours.

The Raspberry canes are also beginning to attract my attention... I haven't yet managed to talk to the plot-owners about these. I don't even know what type of canes they are. I imagine they are probably Floricanes (ones that fruit on the previous year's canes), but whatever they are they need some attention before they become too overgrown. Again, armed with a good pair of secateurs (which I have), this would not be a huge job. The trouble is, there are lots of "not huge jobs" waiting to be done in this garden and I really do want to make growing vegetables my first priority!


I know I have said this before, but the state of the garden is currently NOT severely overgrown. Yes, it's a little untidy and unkempt, but the weeds are mainly fairly superficial and digging them out is not too difficult. The owners were still doing a bit of gardening even last Summer, before it all became too much for them. It must be so heartbreaking to get to that point and to think "What will become of my lovely garden, now that I can no longer keep it looking nice?" I was chatting with the old gentleman this week and he was effusive in his thanks, but I assured him that our arrangement is a true Win:Win one - his property will still be maintained, and hopefully I'll get lots of lovely veg (and possibly fruit!).

This is the bit still to be dug. See what I mean? Not a huge challenge at all. 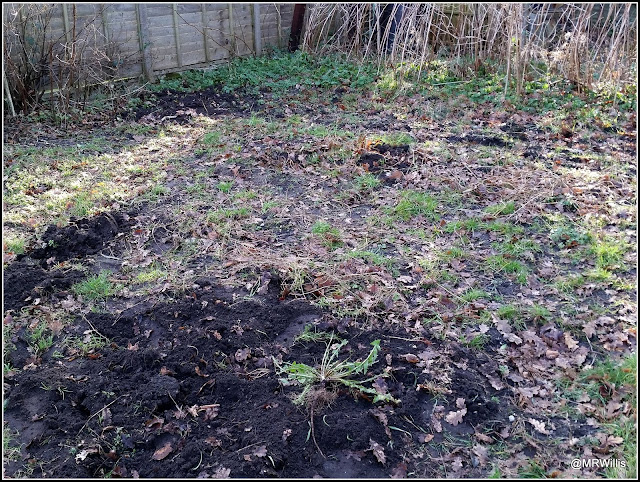 Do you remember I said previously that the plot had blessedly few perennial weeds? Well, there are still some...like this dandelion. 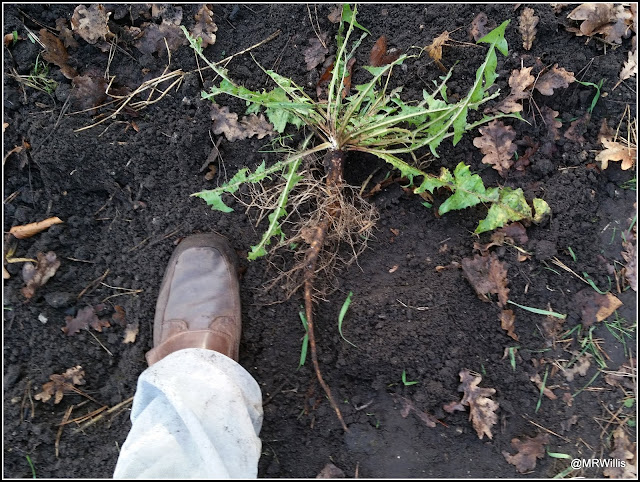 Luckily even dandelions like that come out pretty easily from the lovely light soil.

The last couple of times I have been to this plot the owners have given me a couple of pounds of Bramley apples. The ones they put into storage last Autumn were mostly windfalls, since they couldn't manage to pick the fruit from the trees, and many of them were therefore not perfect specimens. They have not kept so well and are in dire need of using. Even so, they are lovely apples to eat. Being Bramleys they "fall" (disintegrate) completely when cooked, and they make beautiful Stewed Apple and Apple Sauce.

I have already understood that the Bramley apple tree is a key feature of the garden, and it occupies a very prominent position. At this stage of the year it is resting, but I can imagine what it will look like when it blossoms - magnificent, I expect. Right now, it has its own dedicated set of embellishments - a beautiful carpet of Snowdrops adorning the base of its trunk: 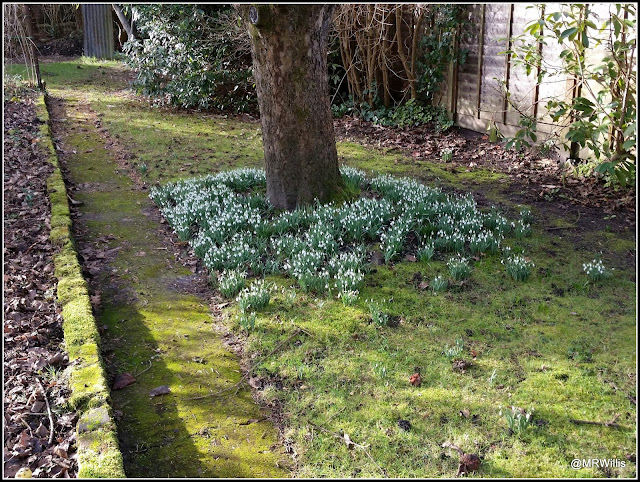 Each time I visit the plot I think about the light conditions. Fortunately the big Bramley tree is on the North-West side of the garden, so it won't block out much light, but there are also big trees in most of the other neighbouring gardens which might. However, the majority of the plot where I am going to grow the veg is a lot more open than my own garden, so I don't anticipate any major issues. I can hardly wait to get planting!
Posted by Mark Willis at 12:00