You probably guessed from the absence of posts here on my blog that I have been on holiday for a while - and thus distanced from my Veg Plot. Jane and I have just returned from a self-catering holiday in Kent, which we shared with our two daughters, their husbands and the four grandchildren. Whilst it was a rare and enjoyable opportunity for us all to get together like that, it is also a wrench being away from the garden in prime harvesting season, even though it was in safe hands while we were away. 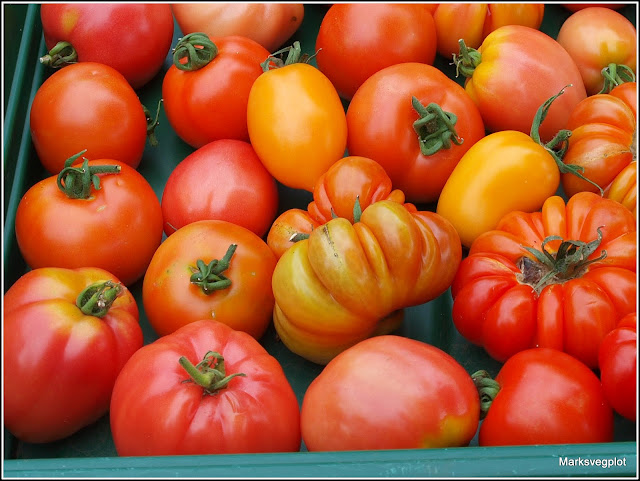 The tomato plants are absolutely groaning with fruit. Some of them are so heavily laden that it is a major challenge to keep them from collapsing in a heap. I picked another huge basketful of the "Maskotka" and "Losetto" ones, and a few fruits from several of the bigger varieties. 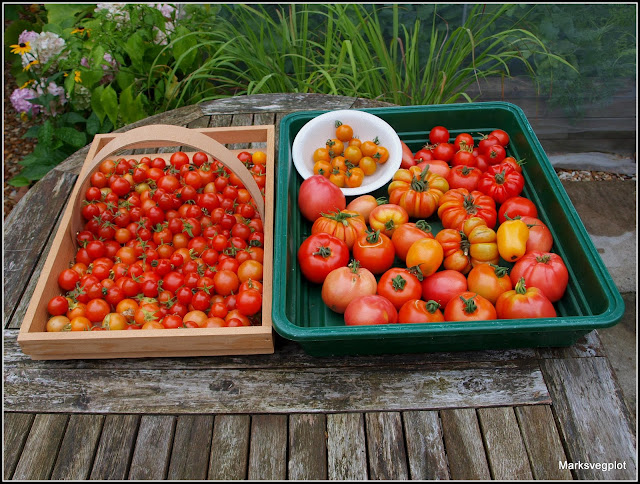 The ones in the white bowl are "Sungold". I have segregated them to remind me that not all tomatoes are red when ripe! I'm not sure my camera can cope properly with this, but in the big green tray are some red tomatoes, some yellow, some pink and several partially-ripe ones which are somewhere in-between. 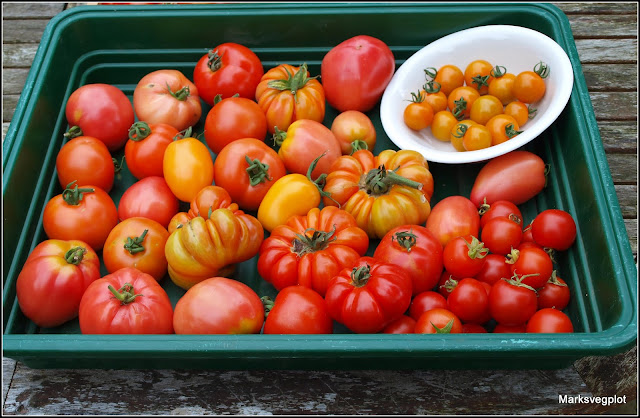 Earlier today I made my first batch of tomato sauce for the year. This is one of the few things I feel it is worth freezing for Winter use.

The Blueberry bushes were also once more covered in ripe fruit, so those needed picking too. 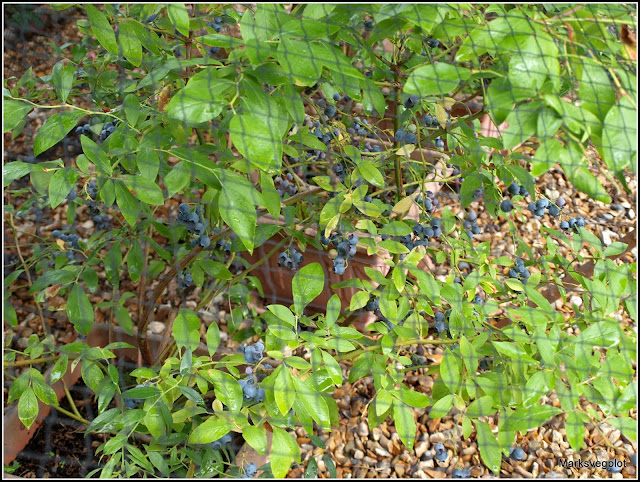 I harvested just over a kilogram of them. This was the second significant harvest from my three bushes, and there are not many more berries left now. The 4th bush is the one that bears pink berries and it seems to have a total of only about a dozen of them! 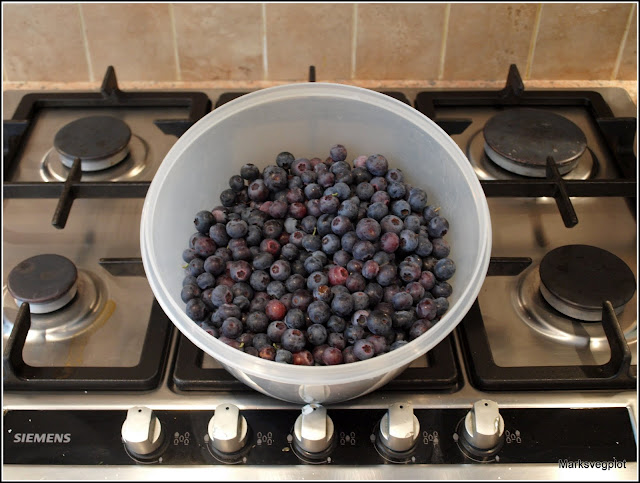 About half of the berries have already been made into a Blueberry compote (for spooning over ice cream), and we haven't yet decided what to do with the rest.

I also pulled a couple of beetroot and half a dozen carrots - just enough for one "use". 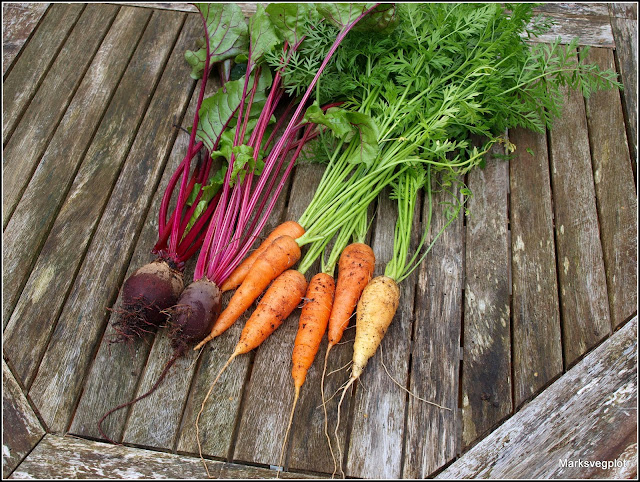 The carrots are again pretty much perfect, with no Carrot Root Fly damage. One of them is almost an albino though. 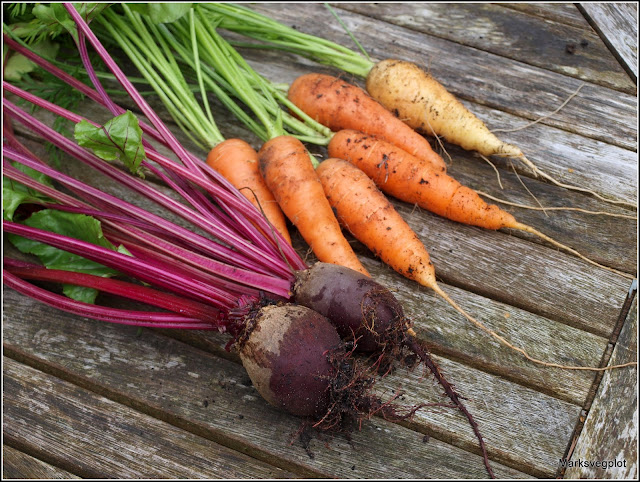 Before we went away I wrote that the Runner Beans had not done particularly well this year (yet), but I'm pleased to report that during the last week lots of pods have finally set. 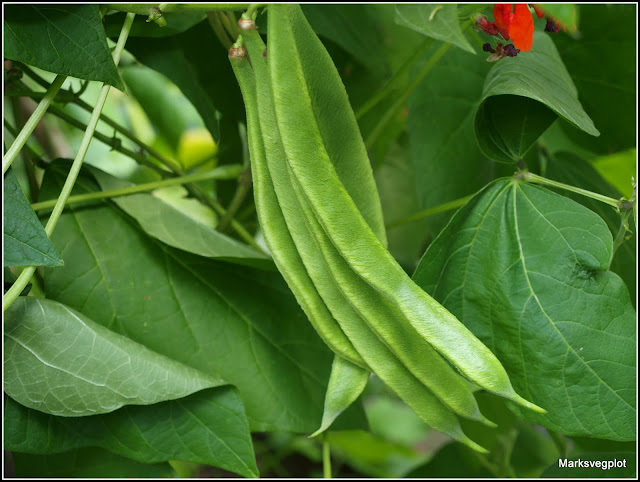 I did pick just a few pods, but I'm looking forward to a better (bigger) harvest in the next few days. 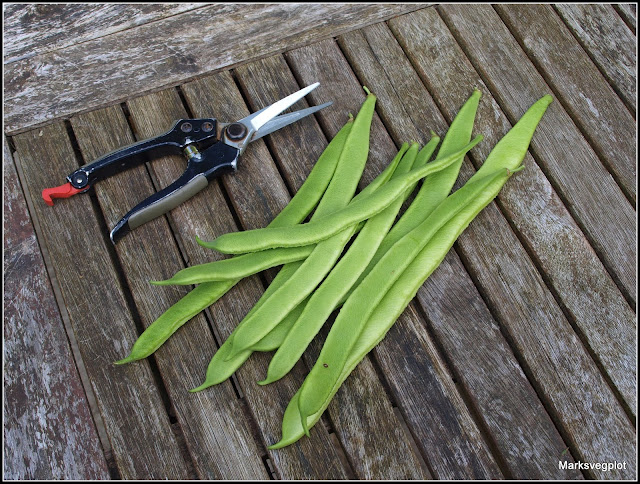 Lots of the chillis are ripening now, so I picked a few of those too. These are mostly "Cayenne" and "Fidalgo Roxa", with one "Aji Benito" (the chubby one seen at bottom right). 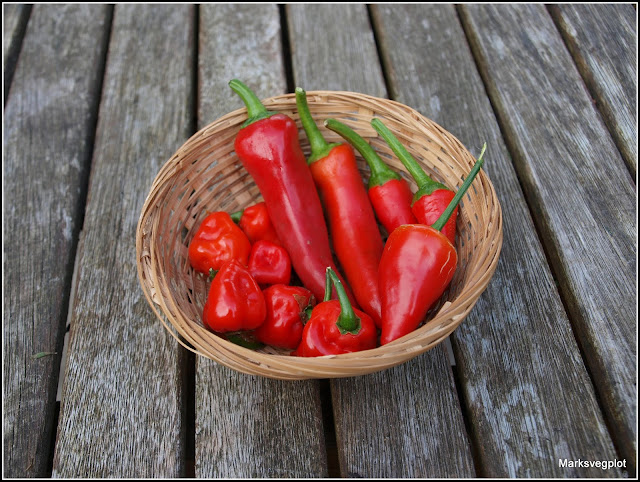 Last of the harvests for today was a colander full of salad leaves. 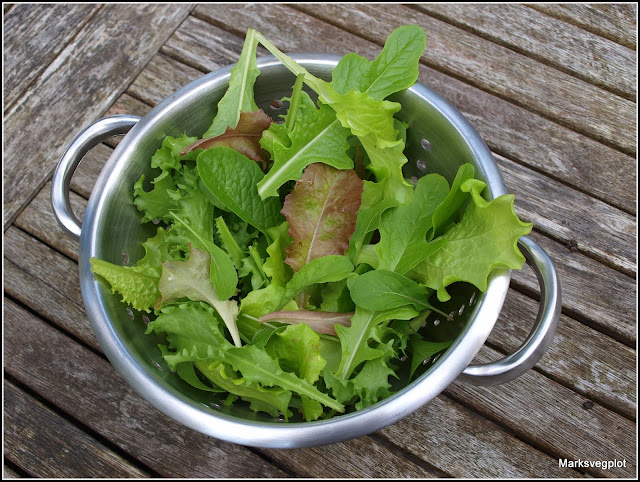 Not bad for one day's harvest, I think you'll agree.
Posted by Mark Willis at 17:00