The tomato harvest has begun in earnest!


I now have 5kgs of those "Maskotka" ones in the fridge now. They are ripening quicker than we can eat them. Putting them in the fridge slows down their ripening.

This week we have eaten a lot of tomatoes. One evening we had this Caprese salad, made with "Marmonde" tomatoes:


We also ate some of the "Marmonde" fried, coating them in flour, egg and breadcrumbs and then shallow-frying them. Picked slightly under-ripe they were perfect done this way because they didn't go mushy like a fully ripe tomato might.


Jane made a tomato-and-cheese puff pastry tart for out lunch one day. She also prepared one of our all time favourite dishes called "Barbecued pork fillet in tomato sauce" (in which the pork is curiously not barbecued, but since it uses Worcestershire sauce, tastes as if it has been.).

I have made a batch of semi-dried tomatoes, using my dehydrator.


Dehydrating tomatoes makes their flavour even more intense. They are lovely as an ingredient, but also on their own as a nibble.

It has been a week of harvesting the "Firsts" - the first fruits of several different varieties of tomato..


These are "Grushkova" - not yet completely ripe.


"Grushkova" has a very distinctive ripening sequence. It starts with a blush of pink at the blossom end, and gradually spreads upwards to the stem end until the whole fruit is pink.

I often pick fruits that are not 100% ripe, because it means I can move them around the garden in a container, keeping them constantly in full sun so that they ripen quicker. The parent plants seem to respond to the loss of their first fruits too, by hastening the ripening of the remainder.


"Ferline" is a heavy cropper, producing quite regularly-shaped fruit that are big but not huge. It also has high disease-resistance. (Just don't expect it to survive blight!)

These are the first "Ailsa Craig", picked under-ripe because they were beginning to split. This can happen to nearly-ripe fruit when a dry spell is followed by an excess of rain - which is exactly what happened here.


The fruits will be OK if used quickly, but they do not keep well once they have split.

The rest of the fruits on the "Ailsa Craig" plant are still green, but there are LOTS of them!


On some of my plants (particularly the "beefsteak" ones), the trusses are so heavy they are beginning to tear away from the stems, so I have been busy tying them up with string.


As long as the truss is still at least partially attached to the stem it will probably still be OK, and the fruit will continue to ripen. Here I have tied the tear with some soft string to try to keep it going. 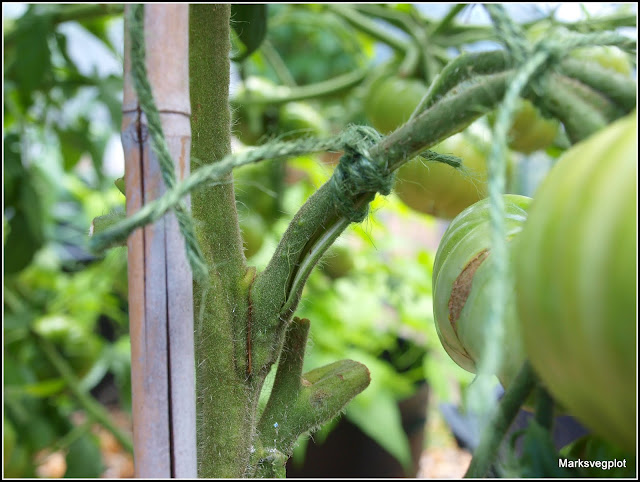