A couple of days ago I saw on Twitter something from Yotam Ottolenghi about him experimenting with making little cornbread cakes flavoured with cumin and with a piece of Feta cheese in the middle. I was so taken with this idea that I immediately rushed into the kitchen to make something similar. And I mean immediately: five minutes after seeing the tweet I was there in the kitchen measuring ingredients! 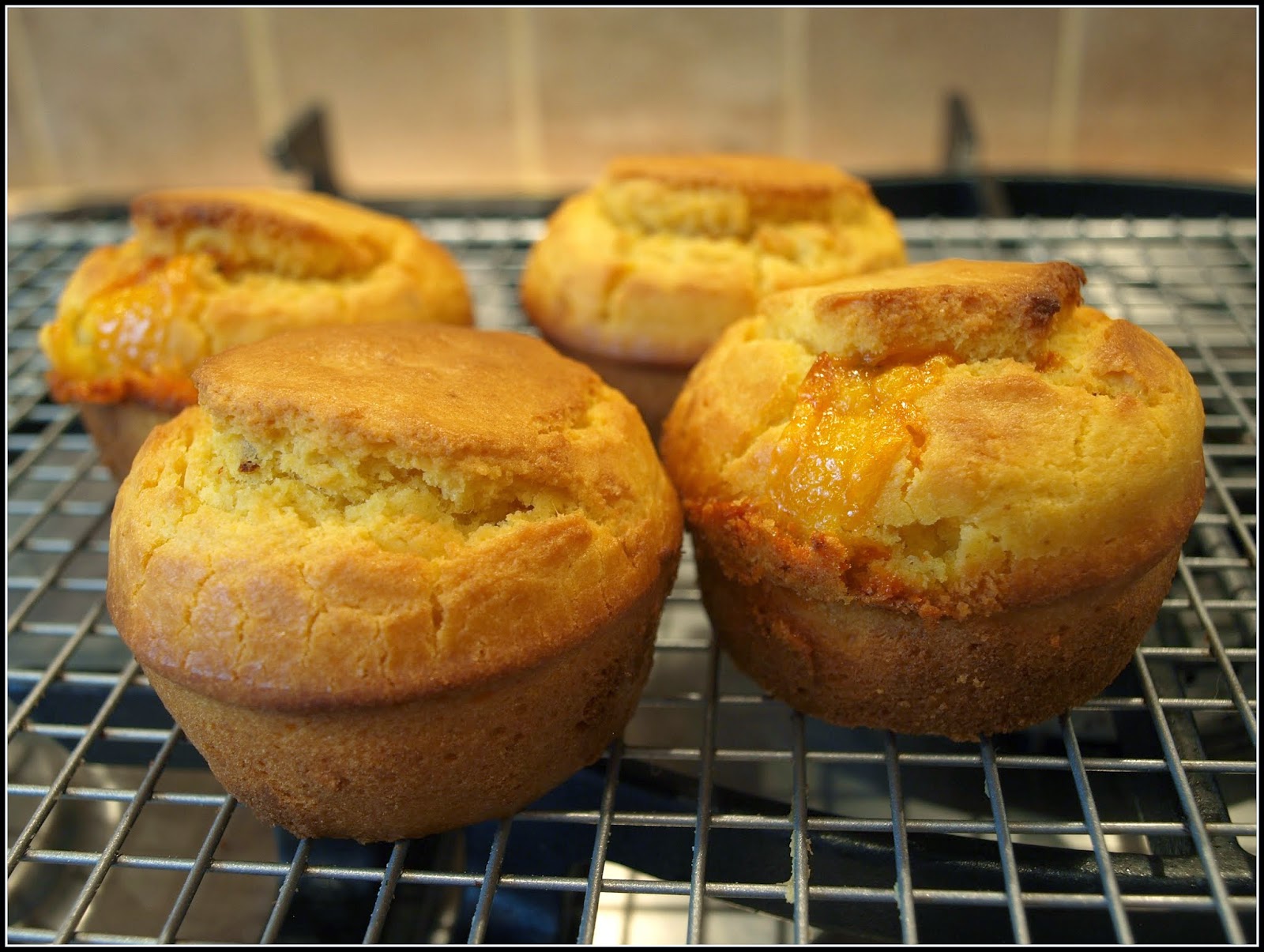 In the absence of any specific recipe information I used the cornbread recipe I have used several times before [I wrote about it HERE], except that this time I cooked the mixture in four separate little individual pudding tins (well greased!). 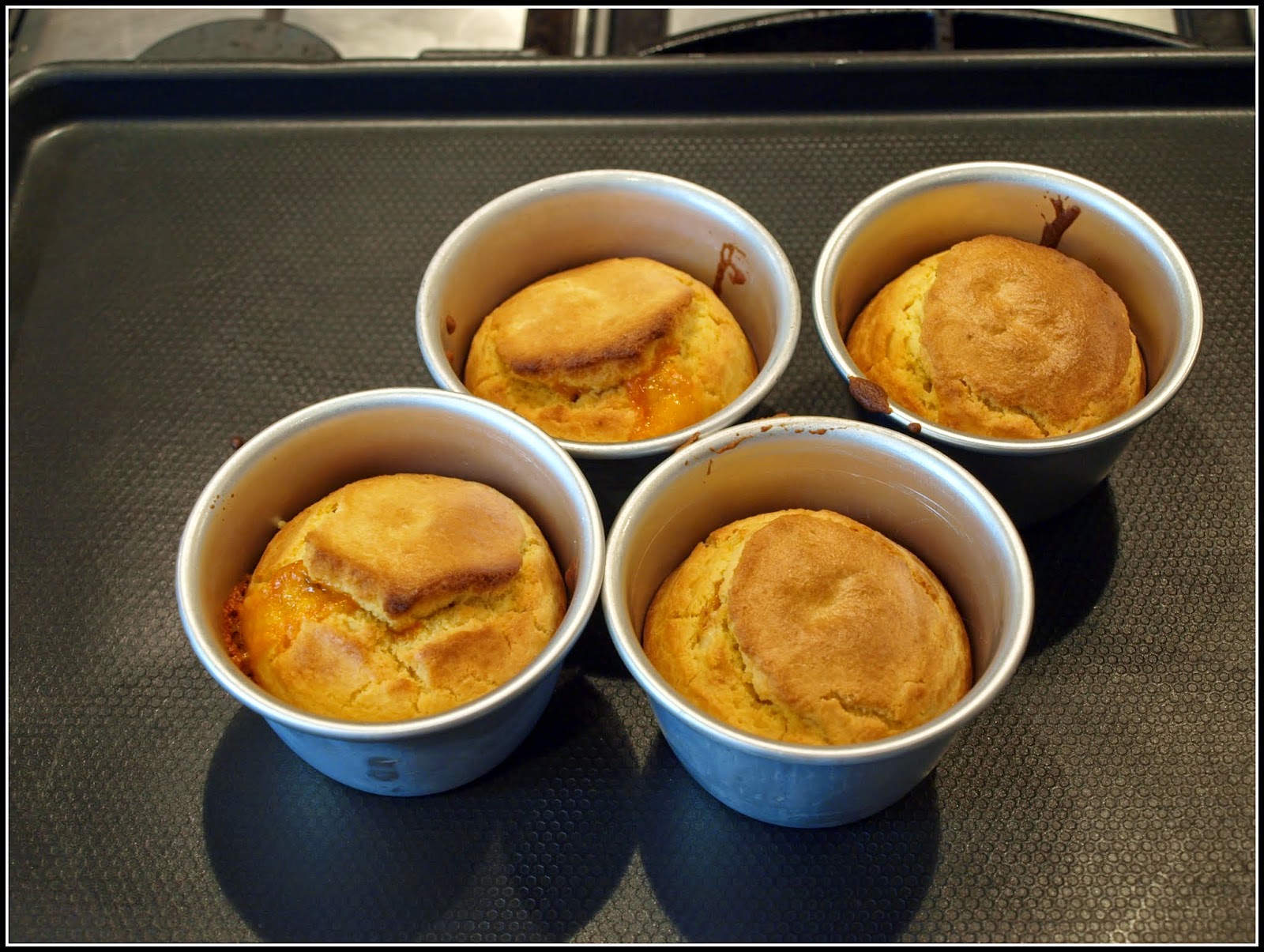 I made the mixture very much as before (I halved the quantities), but instead of adding dried oregano and chilli flakes, I added a quarter teaspoon of ground cumin and a pinch of whole cumin seeds. When the mixture was ready, I spooned it into the moulds and then pushed into each one a 1" cube of Blue Shropshire cheese. Yes, I know Blue Shropshire is nothing like Feta, but we didn't have any Feta but we did have loads of Blue Shropshire! There is a story behind that too: just before Christmas, Jane won two packs each of three different types of Blue Cheese made by Cropwell Bishop. Lovely cheese, but more than we would be able to eat "conventionally" before its Use By date. For those of you who don't know Blue Shropshire, this is what it looks like. Very similar to Blue Stilton, but with an orangey-yellow background colour as opposed to the normal off-white for Stilton. 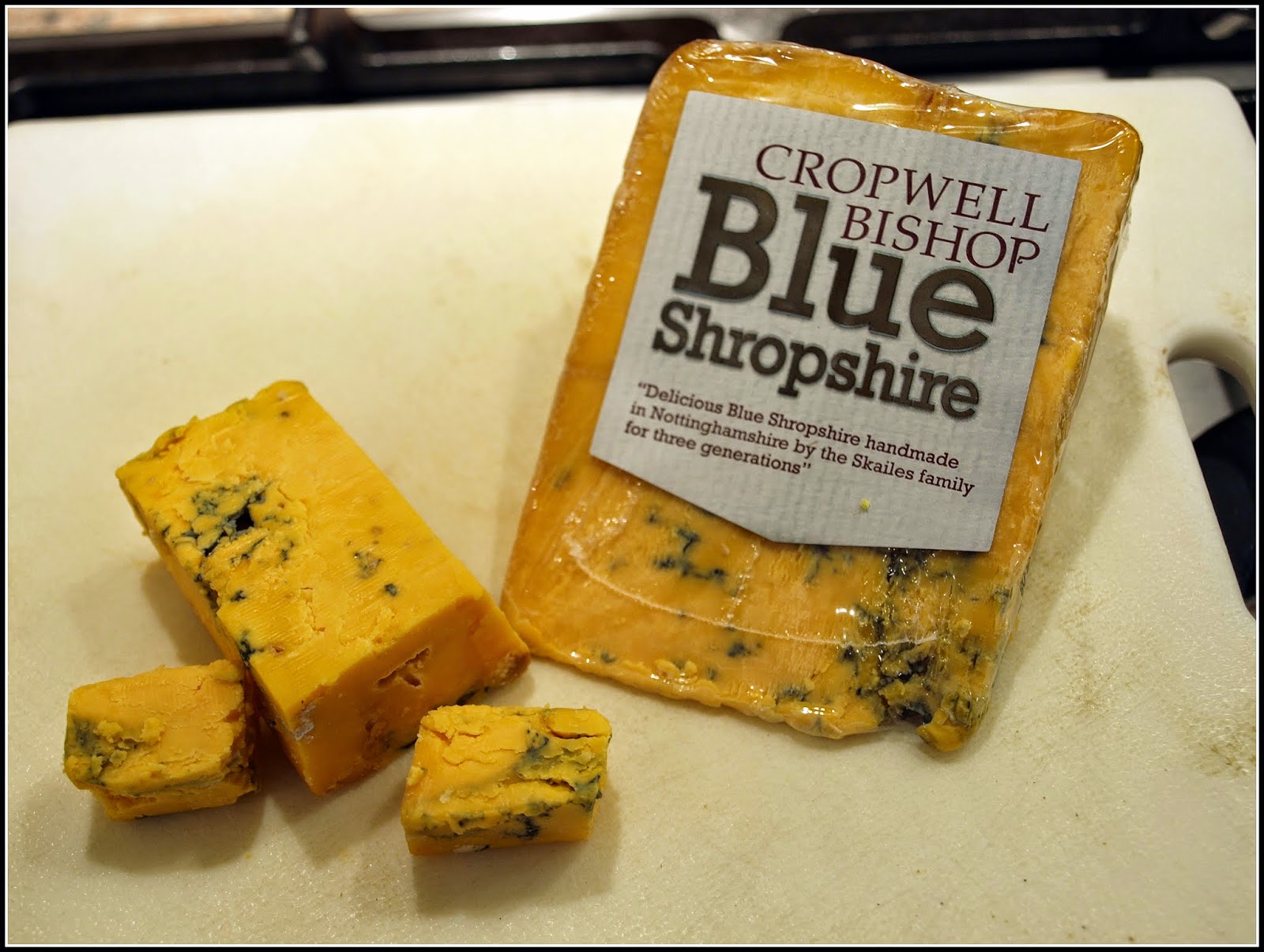 Some of it has been eaten with fruit and biscuits, but some of it has also been used in cooking. For instance, I made one pack into a Cauliflower and Stilton soup, with which the corn-cakes described here went very well indeed. The idea with my corn-cakes was that as the mixture cooked, the cheese would slowly melt, and this seems to have worked brilliantly. As you can see here, on a couple of them the cheese actually bubbled up through the top... 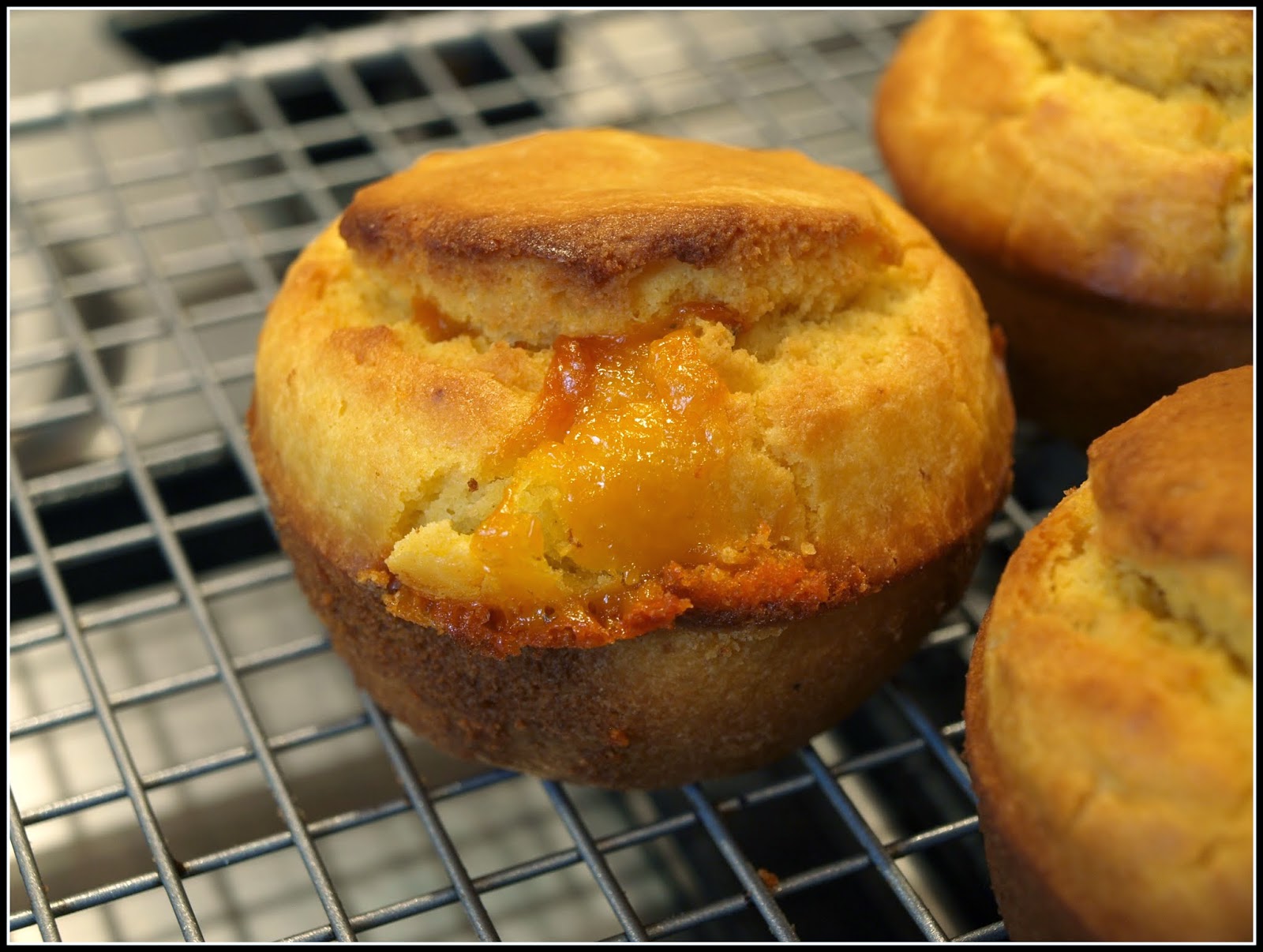 With the tins having been well greased, there was no bother with getting the cakes out - a quick turn round the edge with a knife and a tap on the bottom, and out they came: 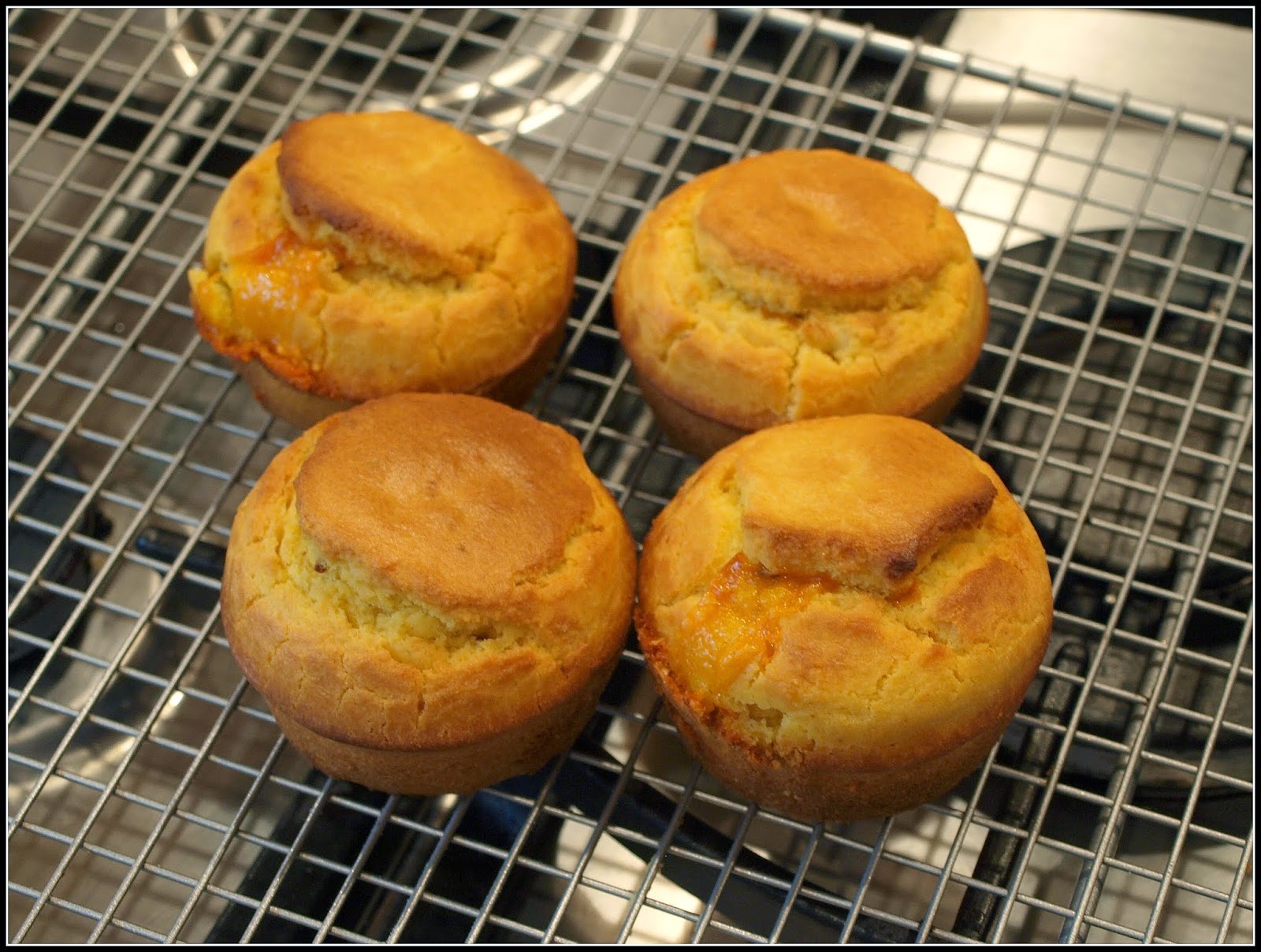 I should mention, by the way, should you want to follow my recipe, that these little cakes were ready (skewer comes out clean) in only 20 minutes at 200C. This really is a recipe of stunning speed and simplicity!

This is a photo of the inside of one of the cakes. You can see that the cheese has melted, leaving a large cavity. This was predictable, of course! 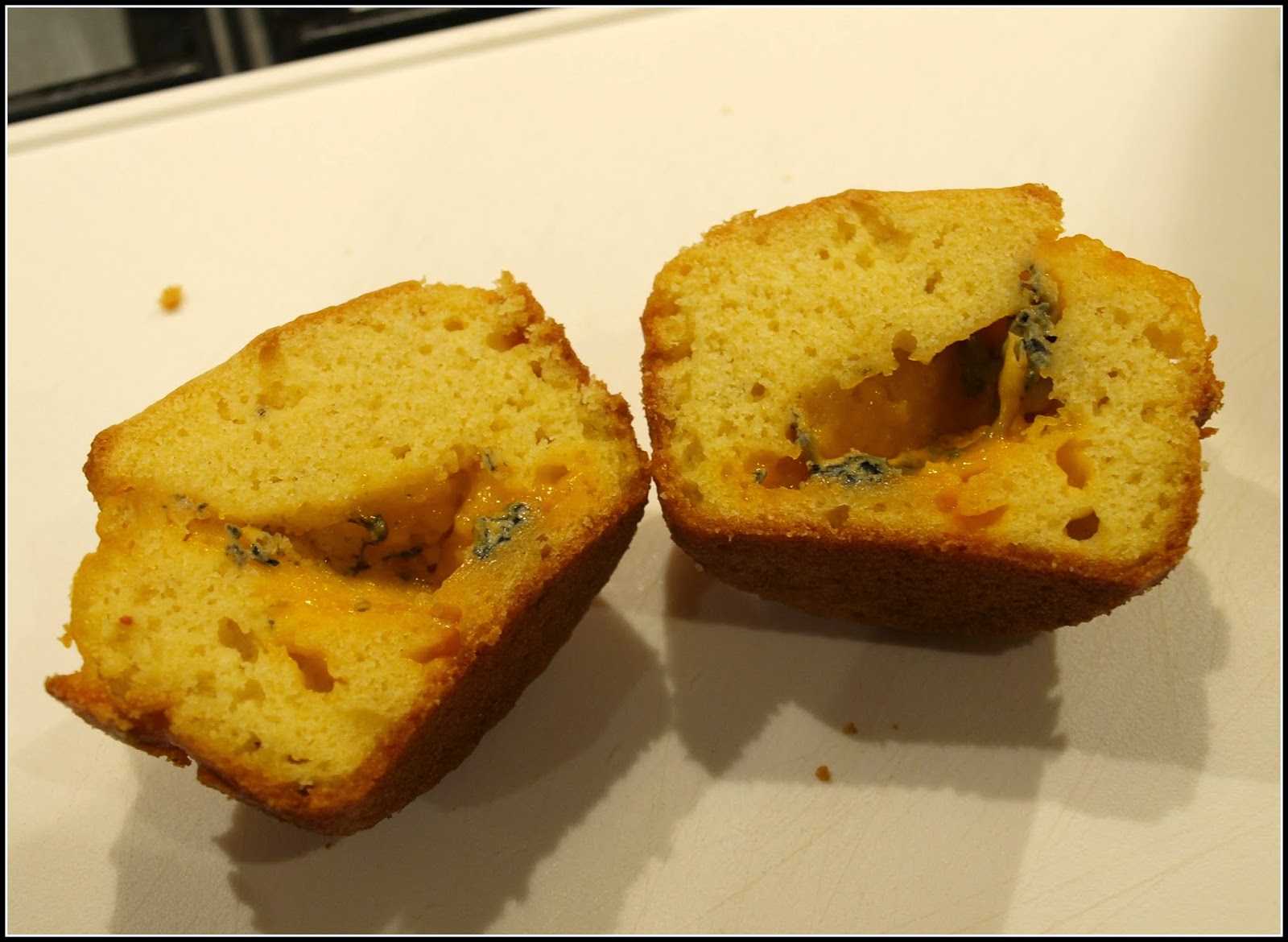 Incidentally, when I had made these cakes, I tweeted a picture of them back to @ottolenghi (I expect it is a "minion" that runs the Twitter account, not The Man Himself) and he/they said that they had also initially used Blue cheese, before trying the Feta. I think that by implication this says that Feta works better, but who knows? I expect it doesn't melt, but stays in a lump. I may try the cakes again soon, with Feta this time.
Posted by Mark Willis at 12:00