Last weekend was the RSPB's Big Garden Birdwatch (a survey of bird populations, reliant on observations by amateur bird-watchers). I didn't participate in the survey myself, but I thought it was a good occasion on which to do my bit towards helping the birds, by constructing a nesting-box. 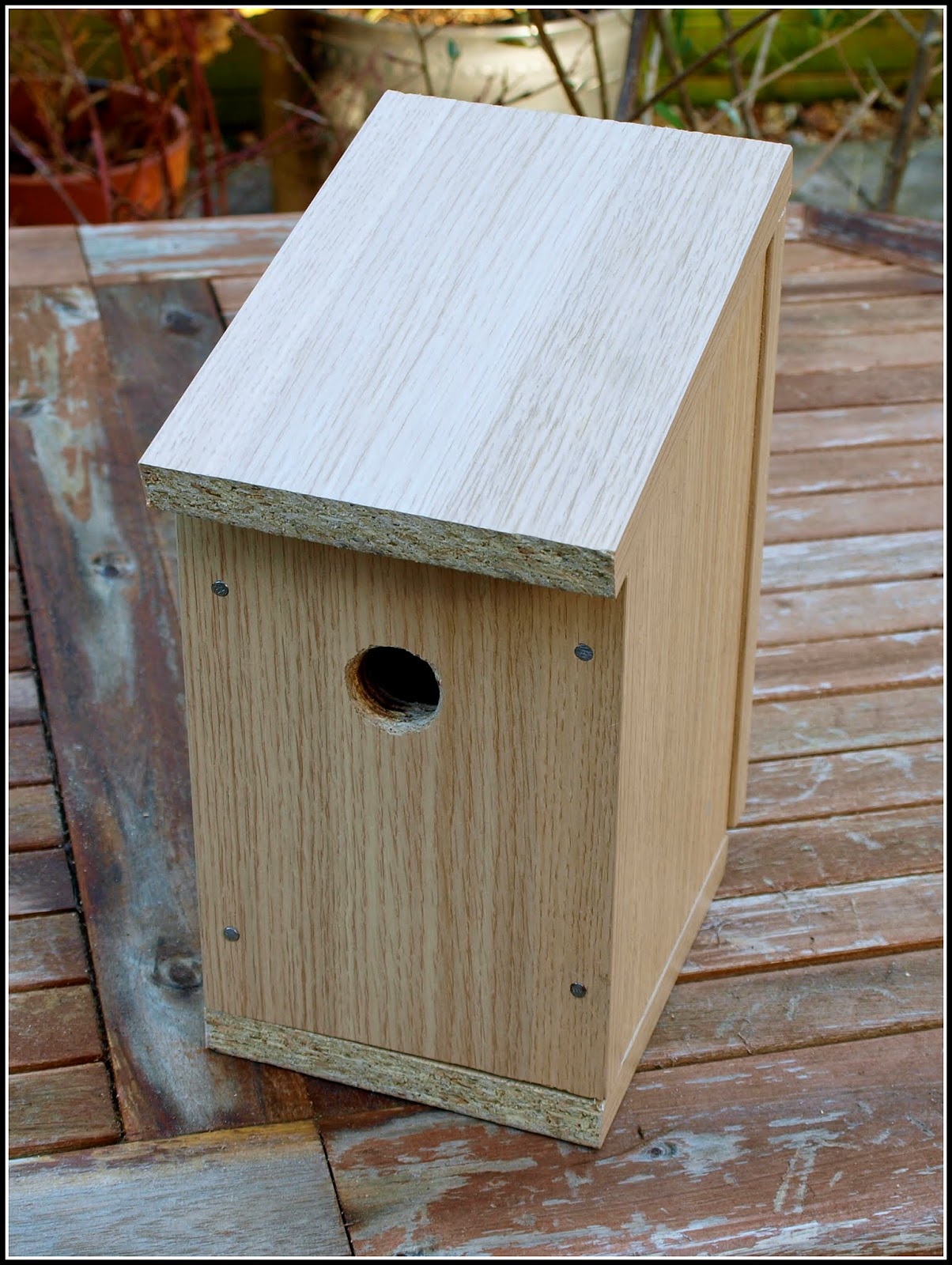 I'm not a skilled carpenter, so my efforts are a bit amateurish. No precise measurements, no finesse here, but it will probably serve the purpose well enough! 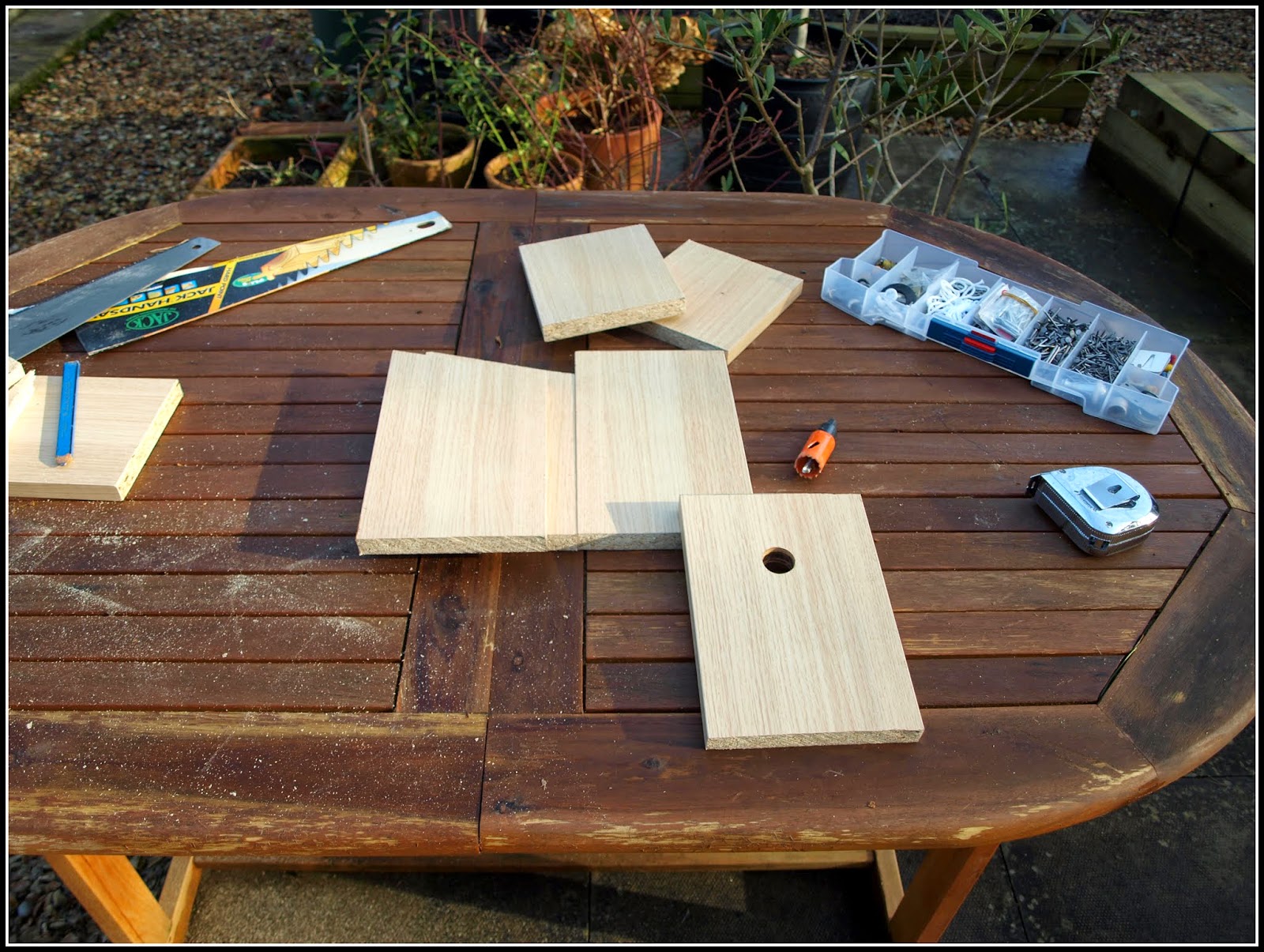 My nesting-box is constructed from a plank of good-quality chipboard left over from when our kitchen was re-done. It has been sitting in the garage for the last couple of years, waiting for just this sort of opportunity. [Our garage is full of bits and pieces that will "come in useful one day"!]

I sawed the plank into the relevant lengths (to my own design) with a handsaw. Two sides (notice that one end is angled), back, front, base and lid. 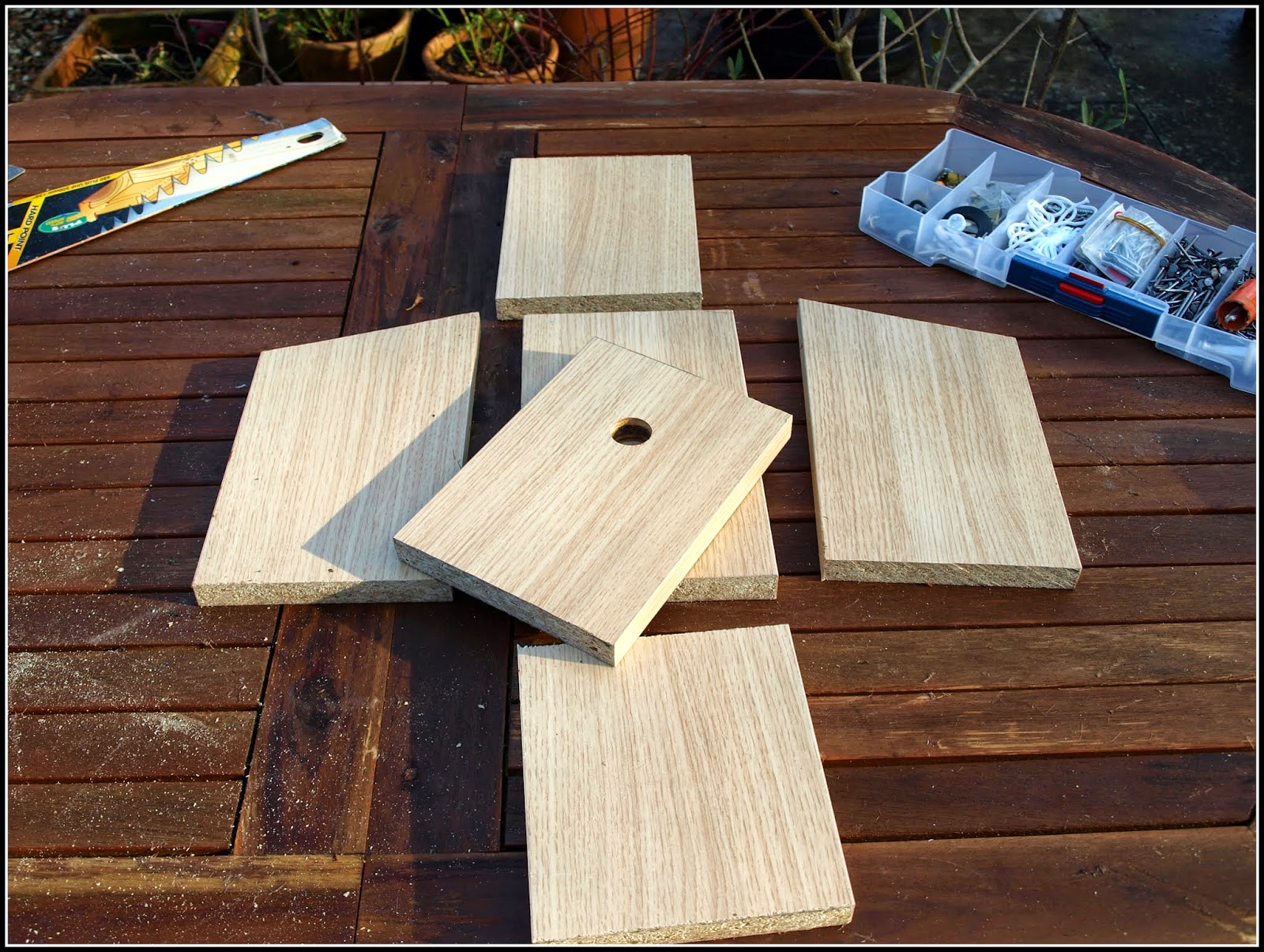 The entry-hole in the front was made with this gadget (I don't know what it is called), which fits onto an electric drill: 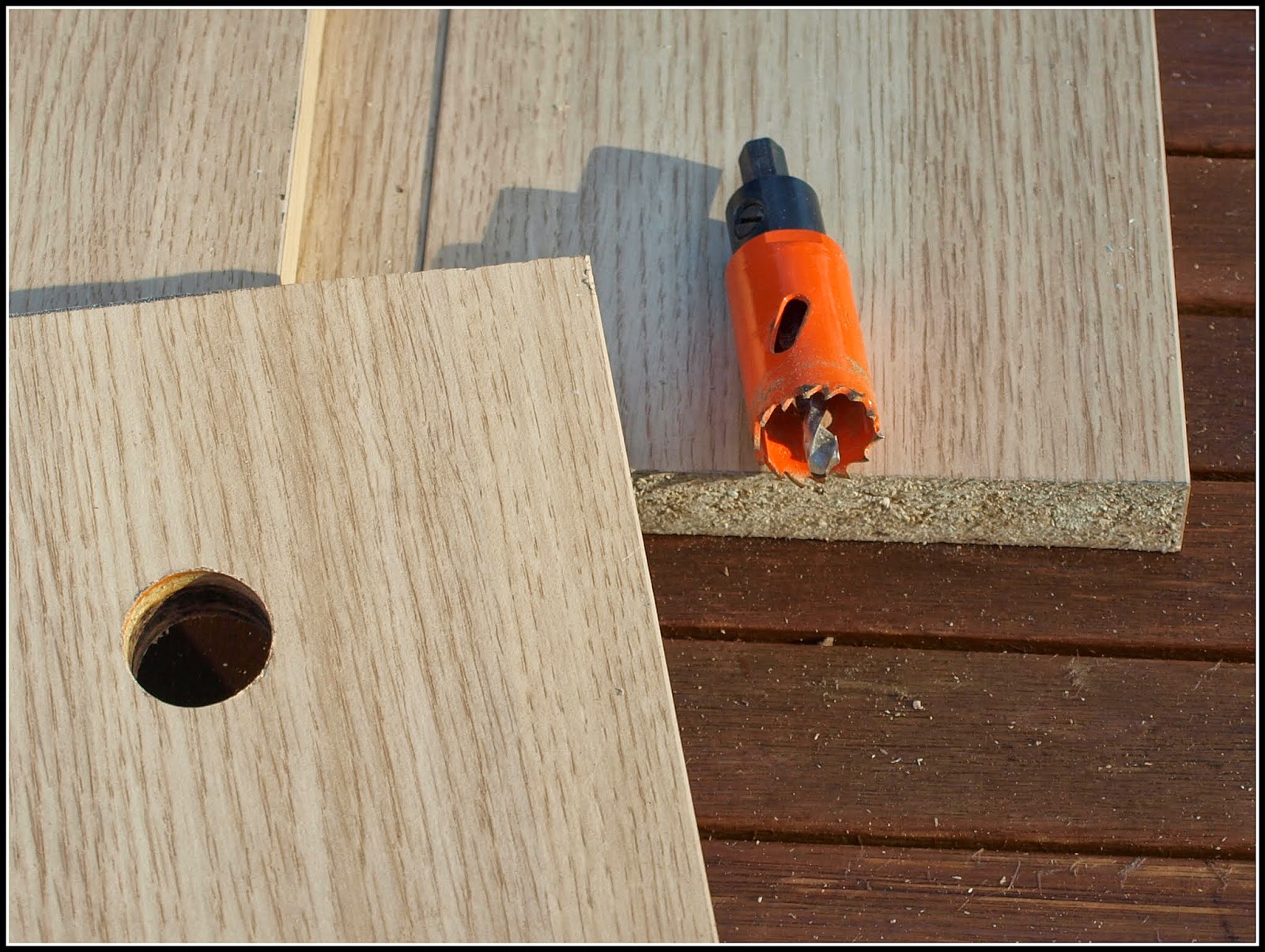 The only one I have makes a 25mm hole, which would be OK for Bluetits, but a bit tight for Great Tits or anything bigger, so I widened the hole to about 30mm.

I made two holes high up in the back piece, which are used for attaching the nesting-box to a tree. They look neat on this side, but the exit-hole on the other side ended up very ragged (you will see this in a later photo). This is one of the hazards of using chipboard rather than real wood. 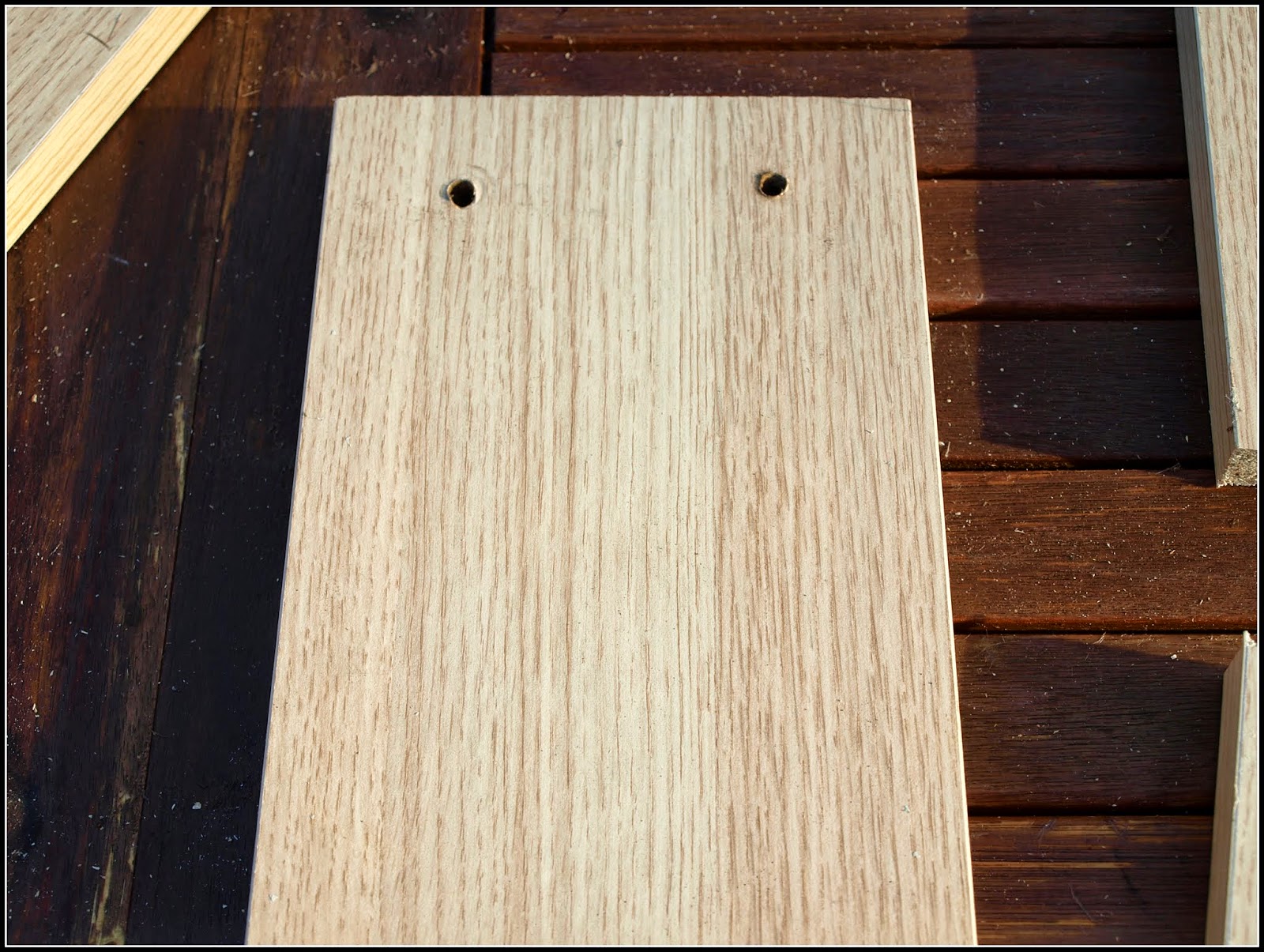 I also drilled some holes in the base, for drainage and attachment purposes. 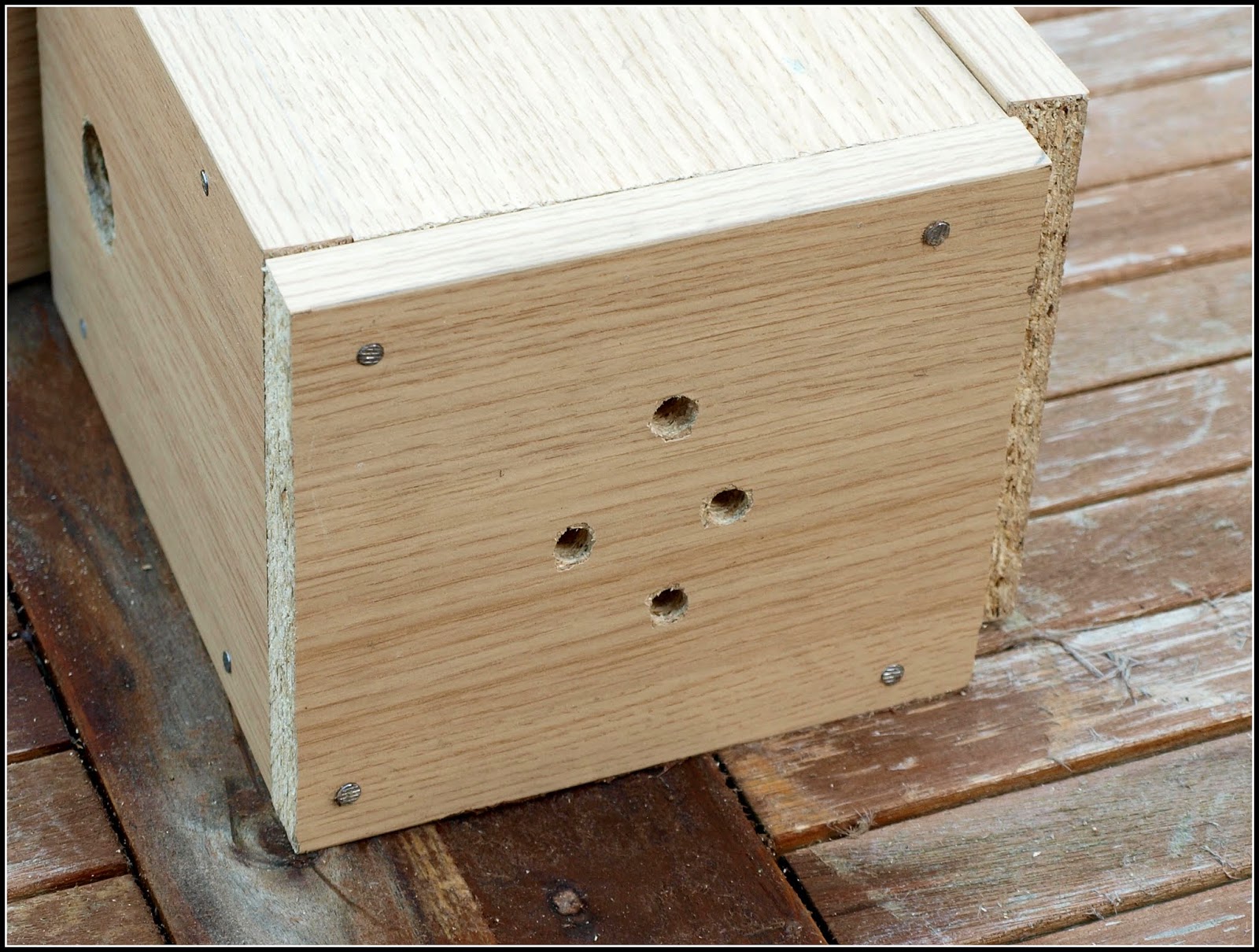 The box was simple to assemble, using some 40mm (1.5") nails. The lid was attached with a small hinge found in my spares box:


Making the lid hinged will mean that the box is easy enough to clean when necessary. Actually, I expect it will probably only last a year (two at most), because the chipboard will fall apart quite rapidly! 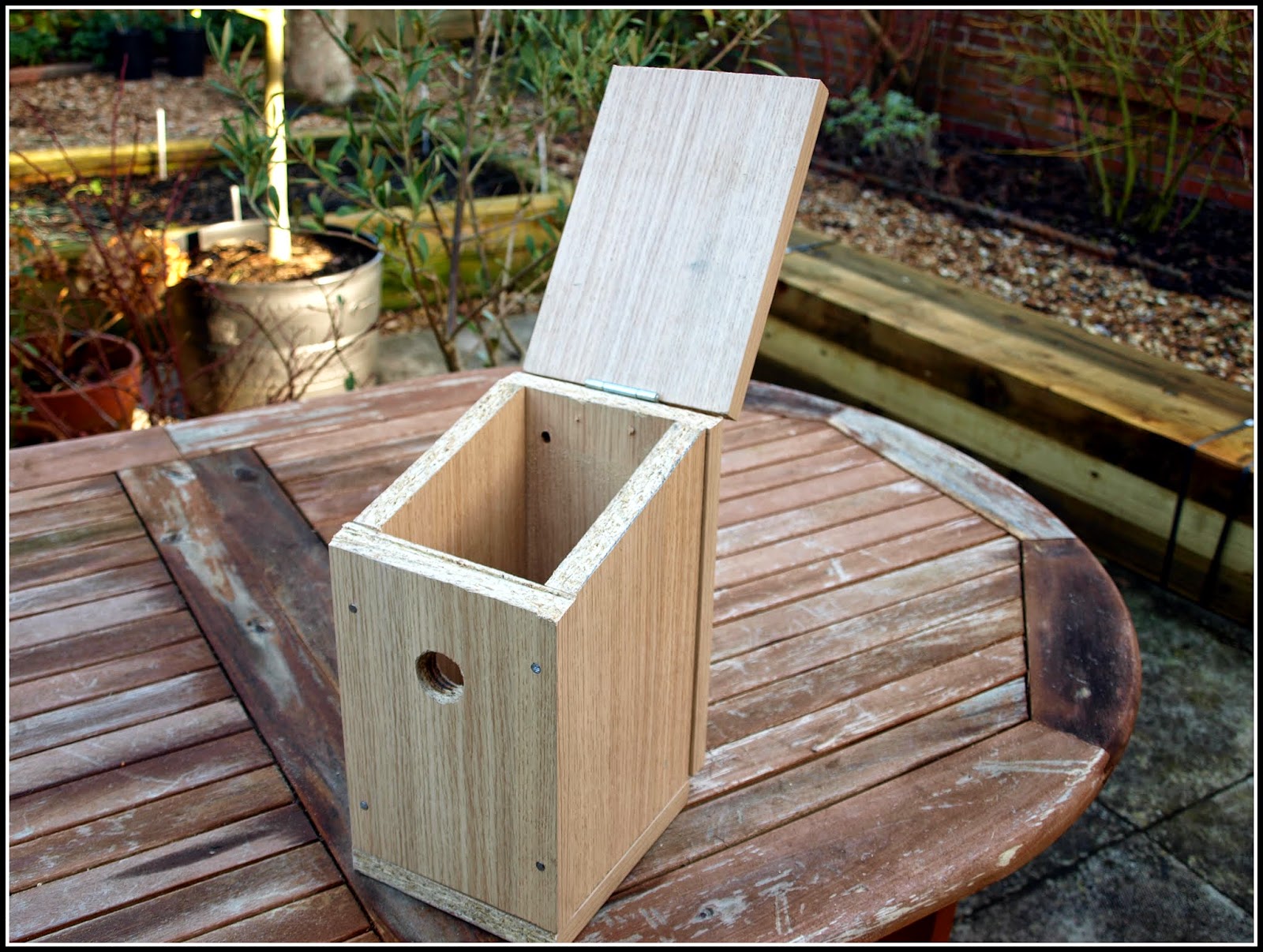 Anyway, here is the finished item: 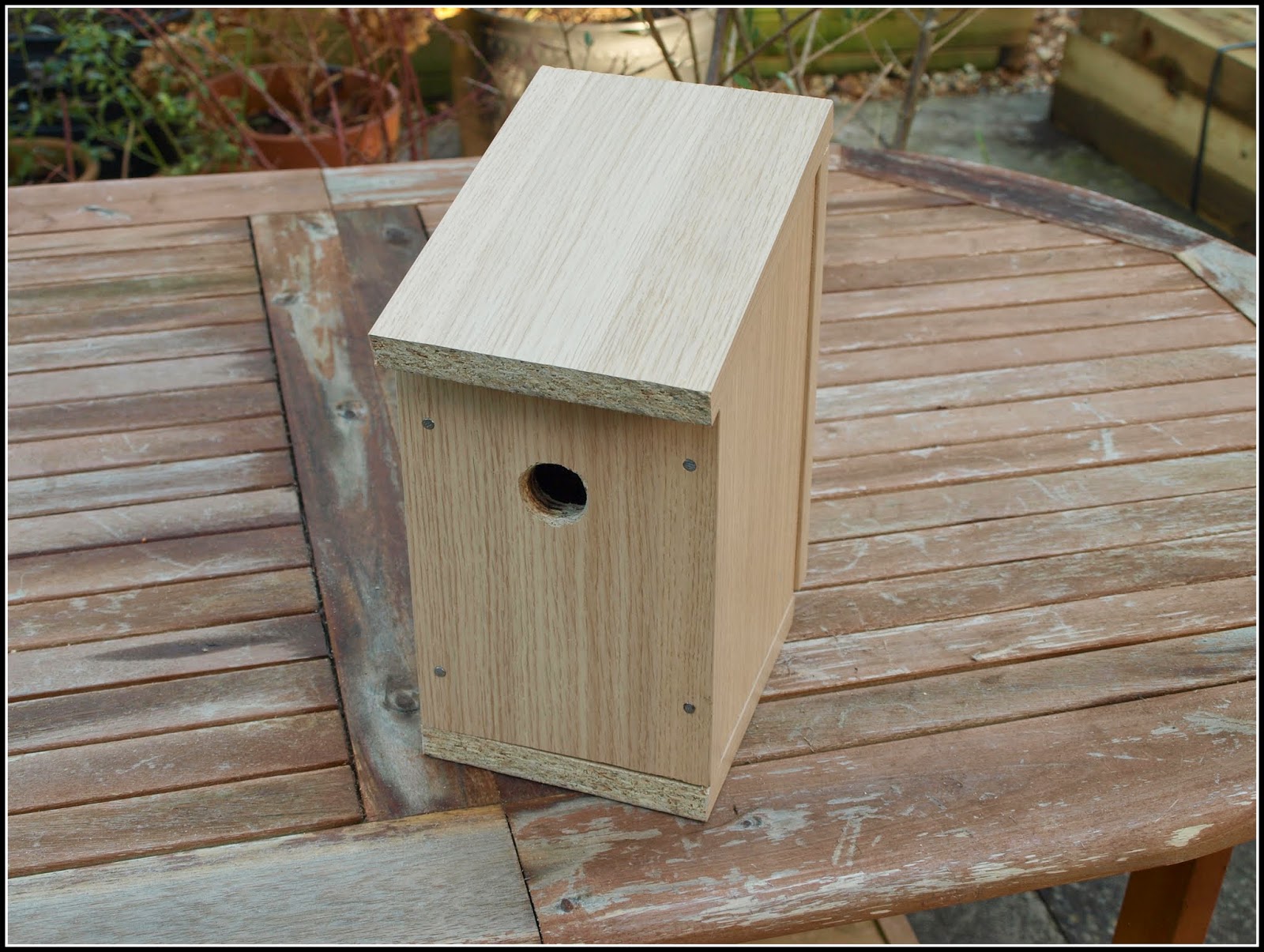 I'm quite proud of that. Even if it only lasts one nesting-season it will have been worthwhile, constructed as it is from odds and ends costing effectively nothing. It only took me about an hour and a half to make too - and half of that was spent ferrying all the tools, nails, wood etc outside and then back in again when I had finished! And at least I now have a workable "template" if I decide to make another box with better materials (that's to say, proper wood, as opposed to chipboard).

As the sun went down I scrambled up a ladder and fixed the box in place in my Bronze Maple tree at a height of about 12 feet above ground level. 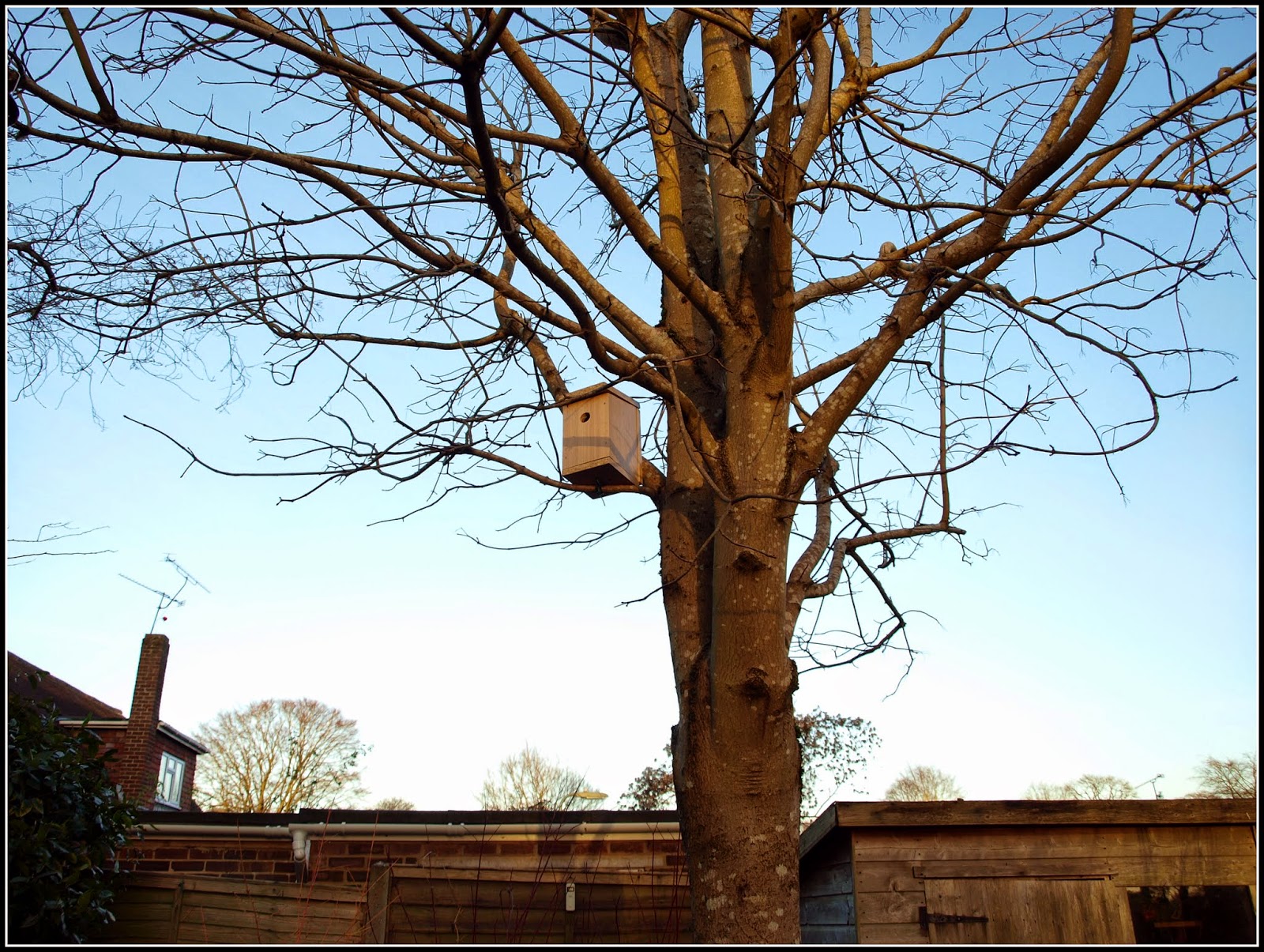 It looks precarious, but it isn't. The main weight of the box is supported by a tree-branch about two inches in diameter, and it is secured top and bottom with lengths of strong plastic washing-line cord. 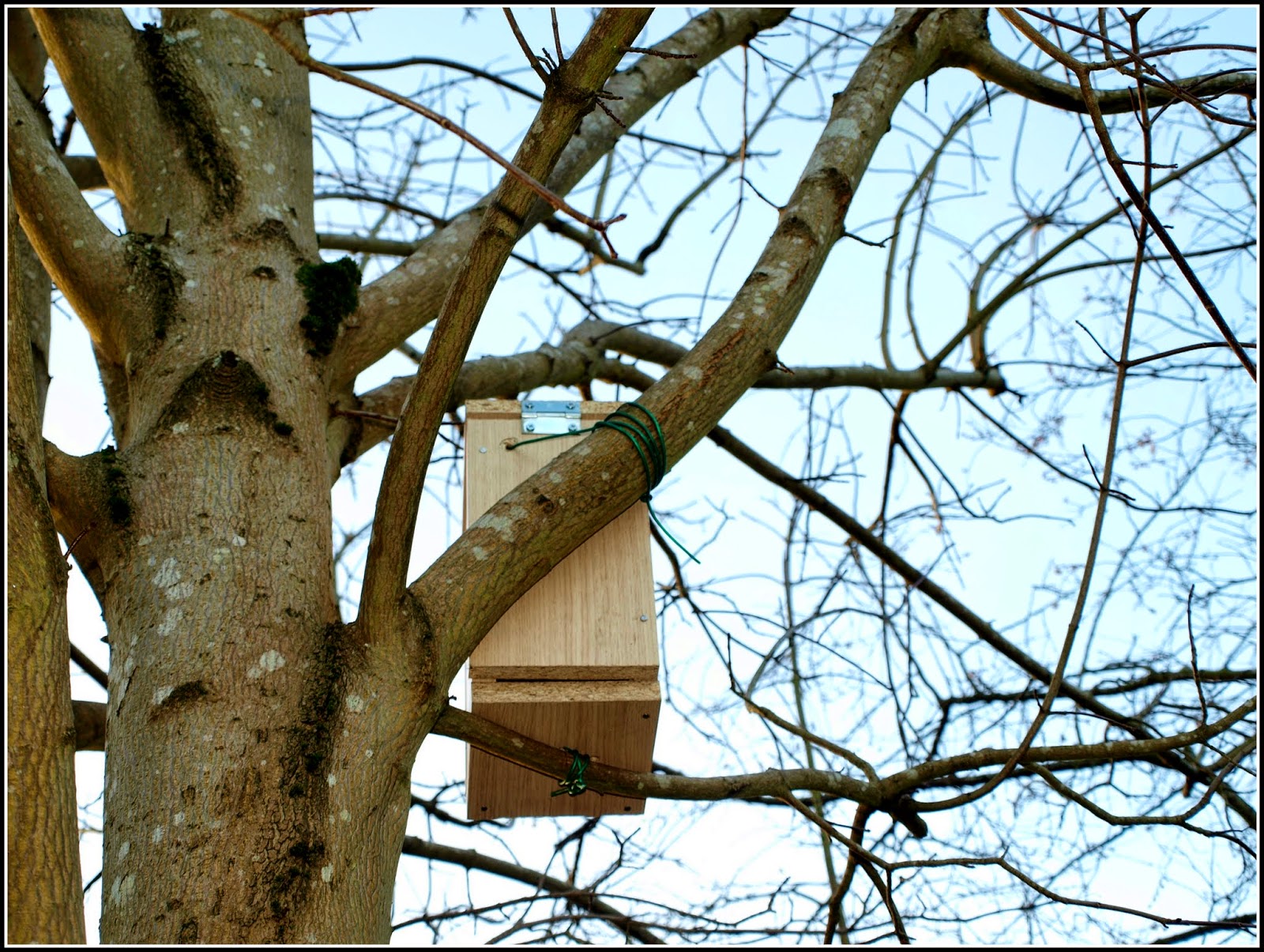 
P.S. I'm re-publishing this post since I accidentally posted two yesterday, leaving nothing for today.
Posted by Mark Willis at 12:00