There is new life bursting out everywhere, and my garden is quickly transforming itself from uniform brown bare soil to patches and rows of lush green.

The first row of Broad Beans is looking really healthy. No damage at all so far! 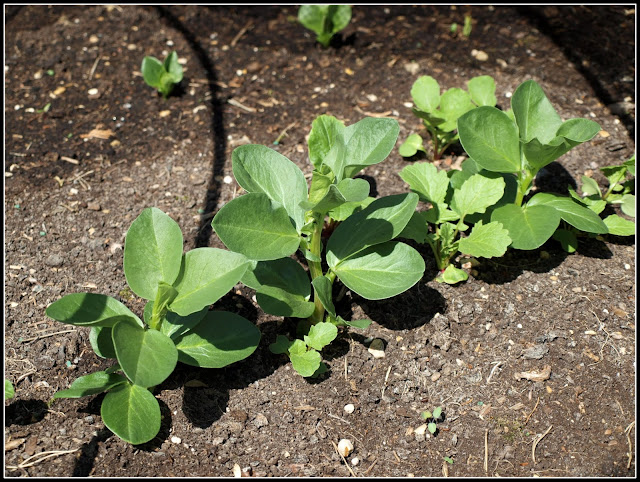 Every bean I sowed, with the exception of one of the spares, germinated. Since the plants all look fine, I have now removed the three spares from the ends of the rows, leaving 14 good plants in place. 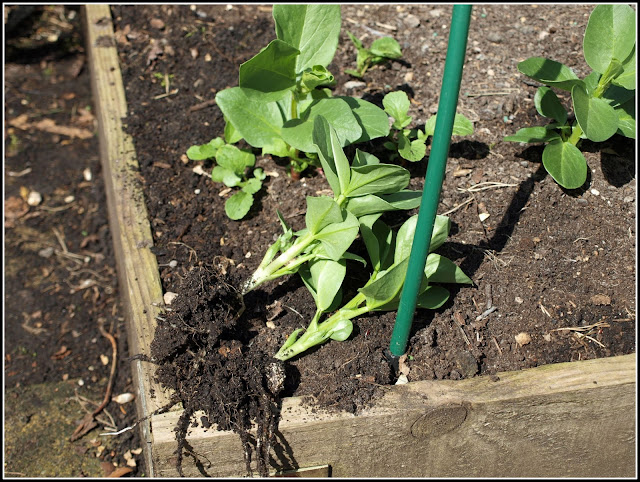 I hadn't the heart to throw away such strong-looking seedlings, so I have stuck them in the ground over near my Rhubarb. I don't expect they will do very well there, because it is too shaded, but at least they have a chance of survival!

Since I already have two more rows of BBs in the ground, the spares that I sowed in pots in the garage are probably not going to be required and I have already arranged to give most of them to a friend. 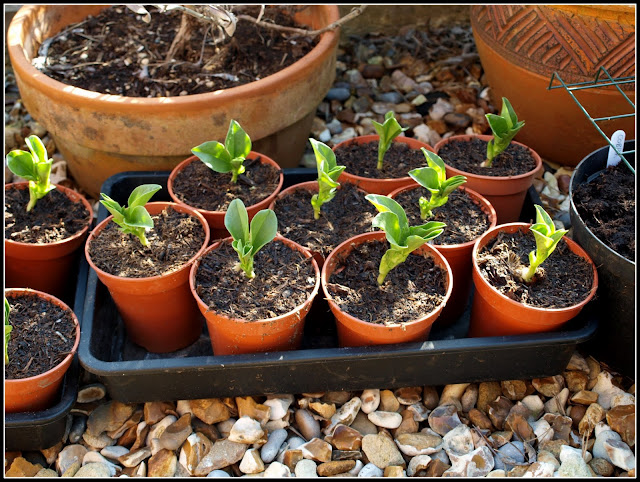 The herbs are growing away strongly now, and most of them have already reached a pickable state.
﻿
﻿﻿
﻿ The Raspberry plants have lots of shoots on them now. Which reminds me, I must get round to re-attaching their supporting wires which I had to remove when my neighbours had their fence replaced. 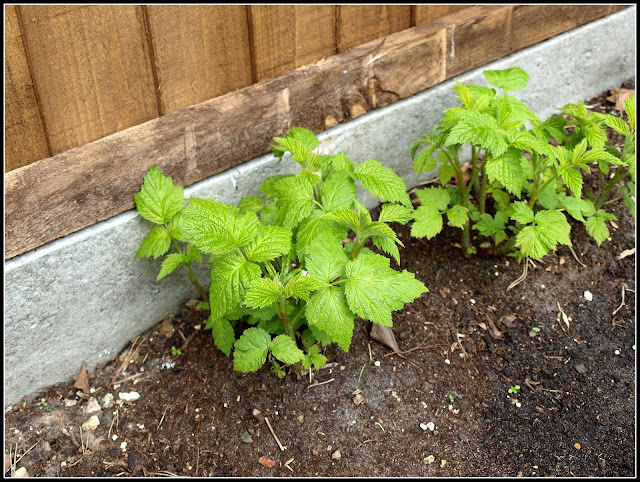 I expect the neigbours will now have Raspberries growing their side of the fence too!

These are some of my Brassica seedlings - Tenderstem Broccoli (for Summer harvesting) and Brussels Sprouts. 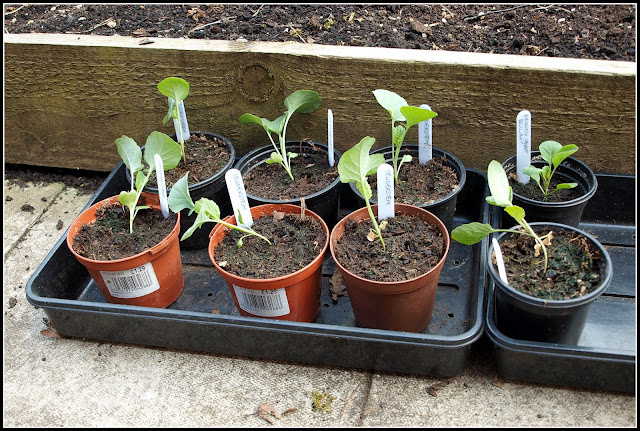 Since each of them now has two or three proper leaves (you can see the cotyledons or seed-leaves have shrivelled up now and are falling off) they are just right for planting out.

﻿
﻿
I think I will put my plastic bell-cloches over them to keep them warm, because the daytime temperatures here are only 10 to 12C and at night-time it is still very cold, occasionally frosty.

The Broccoli plants are going to go in this bed, alongside the Shallots: 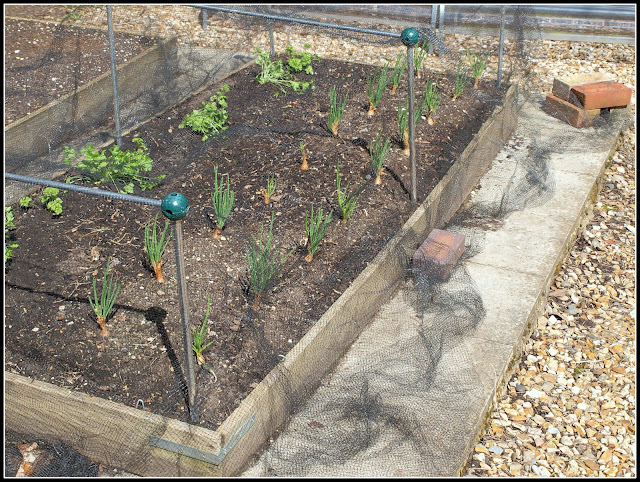 In the background (upper left of photo) you can see some clumps of Parsley - mostly the flat-leaf type - which I have just transplanted. This year I am going to try very hard to grow enough Parsley for our culinary needs, which is really saying something, since we use a lot of Parsley - and would use more if we had it!

Meanwhile, the Purple Sprouting Broccoli season is nearly at an end. Last week I picked loads more spears. The fridge is full of it! 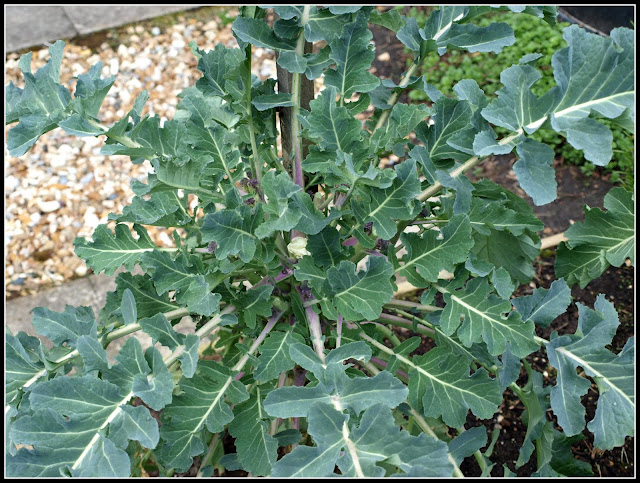 All that is left now is the secondary spears. If you cut the main spears just above a leaf-joint two more (much smaller) spears will grow. 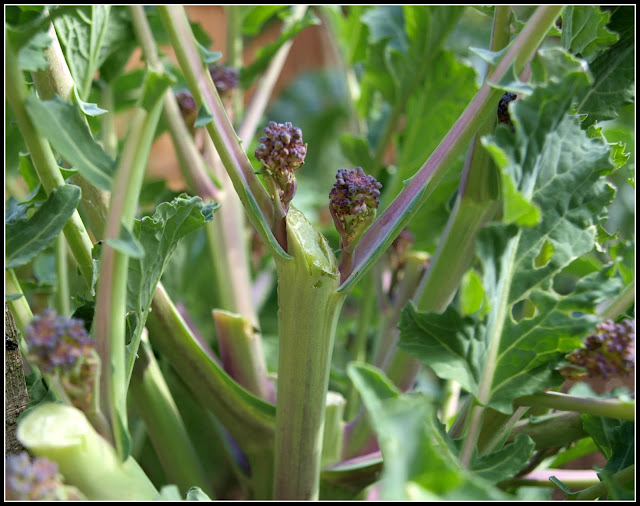 ﻿
The potatoes are looking good too, with strong green shoots coming up in all the pots, especially those benefitting from the cover of the plastic seedling greenhouse: 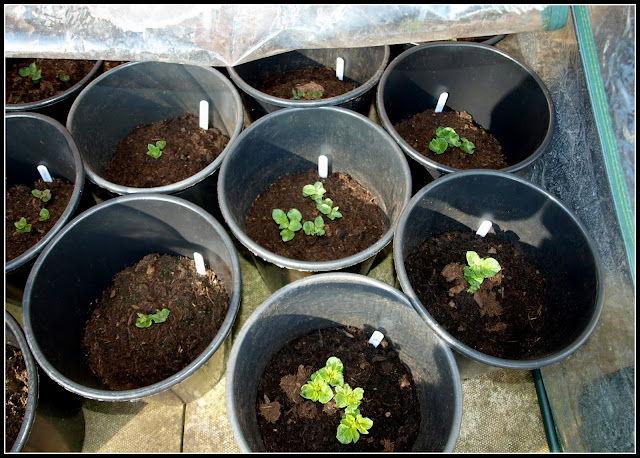 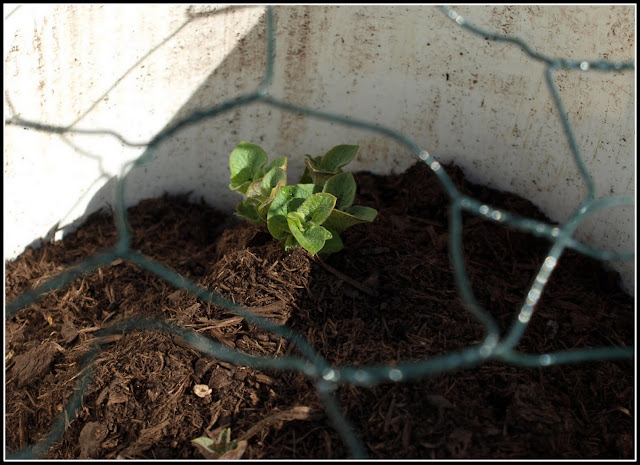 One of my jobs for the next few days will be to earth these up with another layer of compost.

The peas are just starting to climb the canes now. If I get any crop at all from these it will be a bonus. These few plants are ones that I originally started of indoors, aiming to eat them as peashoots, before realising that they are semi-leafless and therefore not much use in salads! 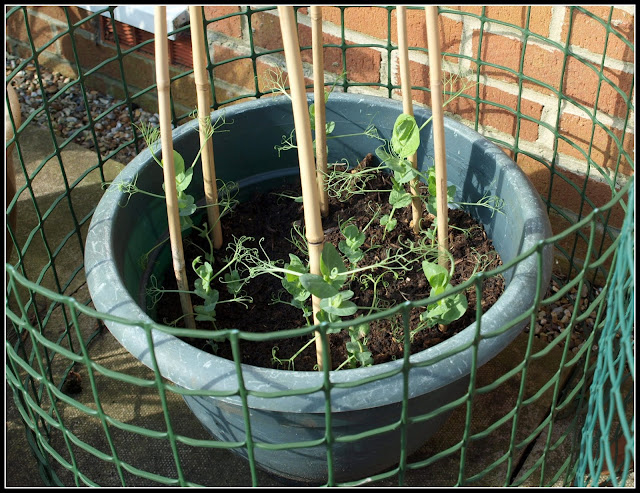 Finally, the climbing beans are sown. I have sown eight pots, with either 6 or 8 beans in each, according to the size of the pot. These are Runner Beans (Scarlet Empire and Firestorm), Climbing French Beans (Cobra), and a couple of the varieties sent to me by Jude, author of that fascinating guest post about heritage beans called The Glorious Bean. I would like to be able to grow ALL of them, but I'm being very disciplined (realistic) and sowing only a few each of "Veitch's" and "District Nurse", both of which I plan to use for drying. Nothing much to see in my photo of these, apart from the inevitable anti-wildlife protection... 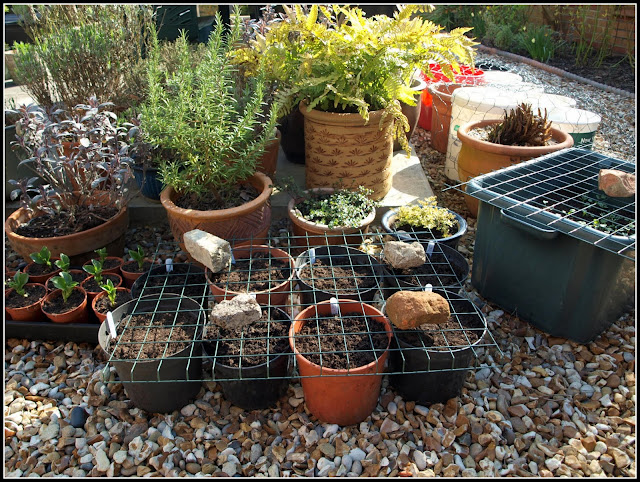 All we need now is some warmer weather - and with a Bank Holiday weekend looming I suppose that is a vain hope!
Posted by Mark Willis at 16:00