But where are the Parsnips?

I'm pleased to say that this year the germination rate of my carrots (3 different varieties) has been very good. [This is not always the case...] 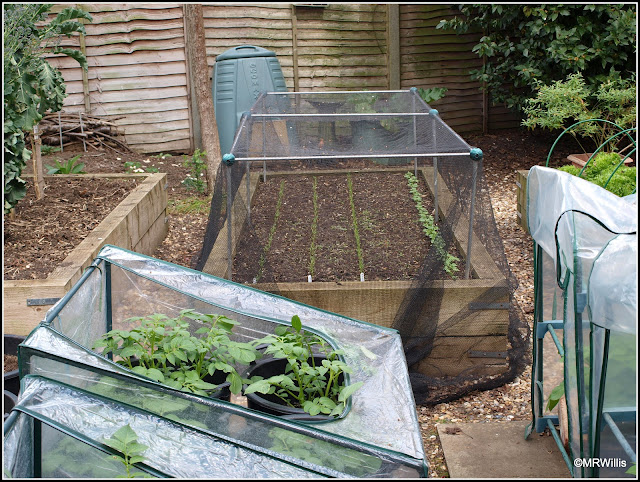 You can see them "from afar" now - 3 well-populated rows of little plants. At the right of the picture, close to the edge of the bed you can also see a row of radishes, coming on very nicely, but between them and the carrots is quite a wide gap. There is supposedly a row of Parsnips in there, but so far I don't see any sign of them germinating. 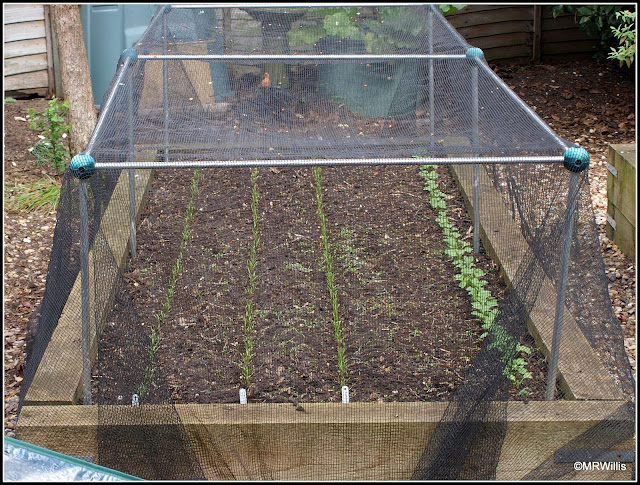 Parsnips are often very slow to germinate, and many is the time I have decided to re-sow, only to find the original seeds popping up a day or two later! We had that nice warm weather over the Easter weekend, which ought to have persuaded the parsnip seeds to get going, especially since I have watered them two or three times in the last few days. Maybe tomorrow...?

In the next-door bed, the one designated as the Salads Bed, I have planted out most of my clumps of beetroot seedlings, between the lettuces and the endives. 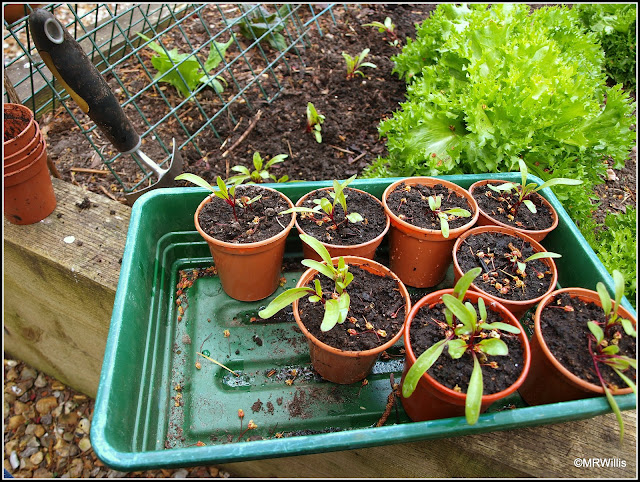 Each clump has about 5 or 6 seedlings. The theory is that doing it this way I'll get more beetroot, but they will be smaller ones. Suits me! 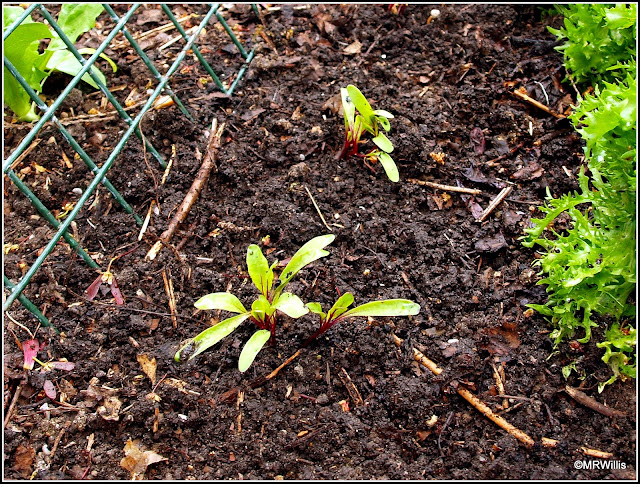 I've kept back three of the clumps, simply because the space where I want to plant them is still occupied by endives. The latter are just beginning to bolt, so rapidly approaching the "Use it or Lose it" stage. 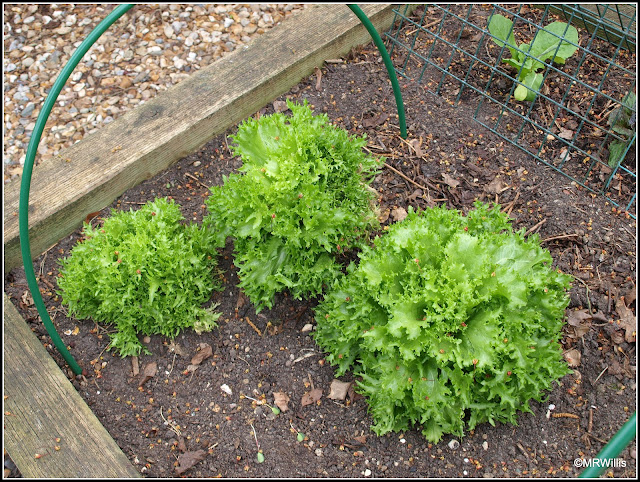 Once the endives are finished, they will be replaced with more lettuces. I have been getting them ready... I sowed a whole load of lettuce seeds in one seed-tray filled with compost. Many of the seeds were old ones and didn't germinate, but I have plenty of two varieties: Great Lakes (an Iceberg type) and Marvel of Four Seasons (a red-and-green Butterhead type). These two were kindly sent to me for review by Gerry from Growseed. Since they were fresh seeds, germination was excellent. 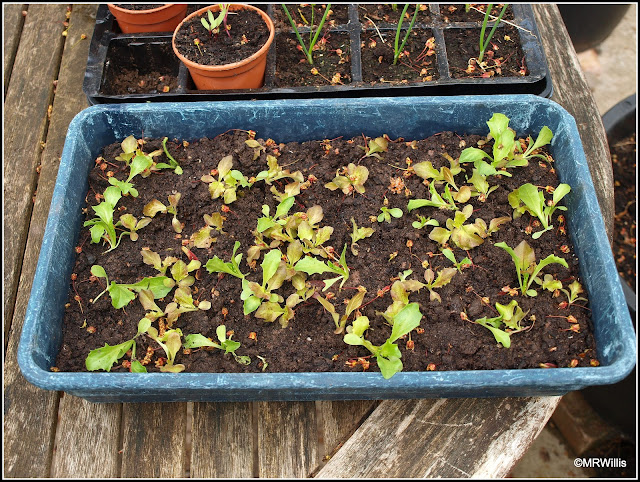 I have recently pricked out six of each of those two varieties, and put them into little 3-inch pots. This way they will have the opportunity to grow on without competition from any of their siblings, so hopefully they will soon be big enough to plant. 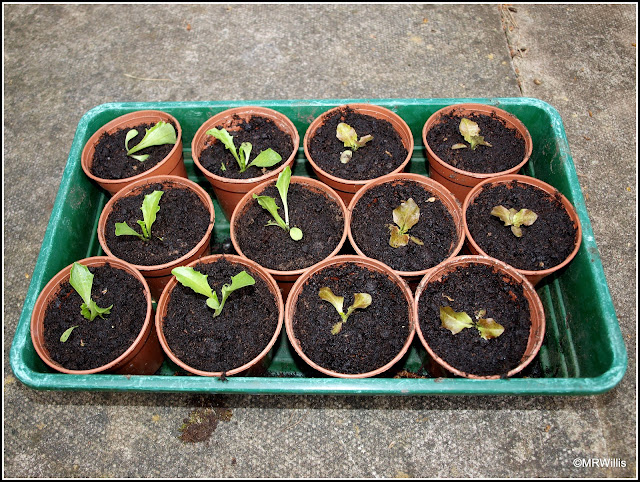 I haven't yet decided what to do with the remainder of the lettuce seedlings. In theory I should ditch them, but it seems such a waste to do that. I'll probably leave them in the original seed-tray and treat them as Baby Salad Leaves. Meanwhile, I've just been sowing another batch of seeds. I have some "Biscia Rossa" and "Lollo Bionda" from Seeds of Italy, which also should be good. 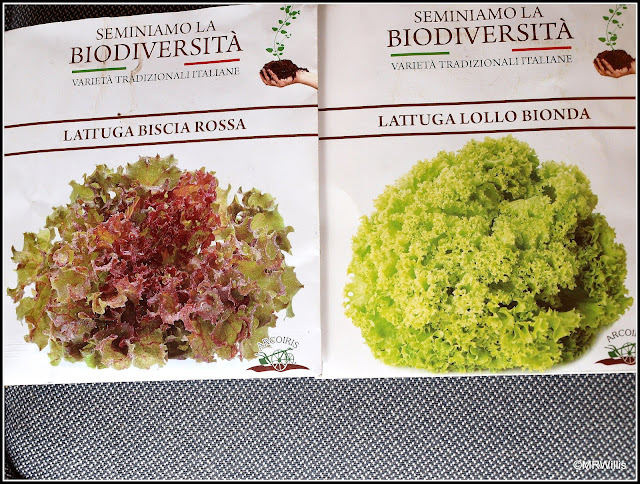