Most people think that growing potatoes needs a lot of space. It doesn’t. You can grow potatoes on a patio or balcony or in the smallest of gardens, if you use suitable containers. Potatoes are easy to grow, and deliver good value for space. Furthermore, there are few things in life more satisfying that digging-up a crop of lovely home-grown potatoes!

Apart from the space factor, there are a number of advantages to growing potatoes in containers. For a start, you can position them wherever you want – for instance somewhere sheltered and unobtrusive until the shoots appear from below soil level, and then somewhere else in fuller sunlight when the foliage gets big and luxuriant, and finally back in the first location again once the foliage begins to die down. Growing in containers also aids crop-rotation too. Of course you can also grow potatoes very successfully in raised beds, but you won’t get the advantages I just mentioned. Harvesting the crop may also be more difficult in a raised bed if it contains other plants as well as your potatoes. Another disadvantage is that in a raised bed it may be difficult to ensure that you harvest ALL the potatoes. Any little “tiddlers” you leave behind may pop up next year in a place where you don’t want them, and can also harbour pests and diseases. With container-grown potatoes it is much easier to avoid these problems.


I wouldn’t want to give the impression that growing potatoes is guaranteed to be 100% successful, but I think most failures are due to insufficient care. Containers can be hard to maintain at the correct level of hydration, so need to be inspected often. The soil/compost in them needs to be kept moist (but not wet) all the time, so frequent watering is probably going to be necessary. If the soil becomes too wet the potatoes may rot, but if it’s too dry you will get a very small crop which will most likely fall victim to the common skin-disease called Scab. Small containers dry out quicker than large ones, and so do ones made of breathable materials (such as terracotta or wood). Plastic ones are better for moisture-retention. Even plastic ones will need holes for drainage though, to avoid waterlogging. After many years of experimentation, I have settled on a type of container which I consider to be ideal. It is made of tough black plastic and will probably last many years; it has carrying-handles for ease of movement; it has several drainage-slots; it is affordable (I paid about £2.50 each); and it has a nominal volume of 35 litres, which is just right to accommodate two seed-tubers of the Early varieties or one of a Maincrop variety. 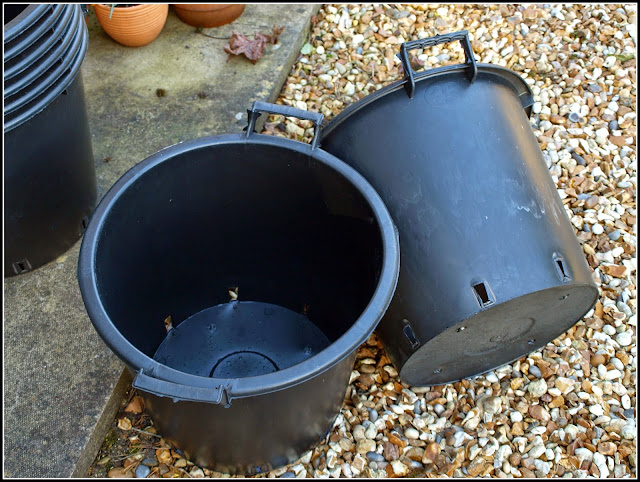 So, having acquired some suitable containers, what next? Prepare your growing-medium. For convenience I’ll refer to this as “compost”, but it will probably be a mixture of compost (home-made or bought) and garden soil. I have found that potatoes do best in compost that has a high level of organic matter, which aids moisture-retention and lessens the risk of Scab. Some of the best potatoes I have ever grown were raised in composted stable manure!


Next, prepare your seed potato tubers – perhaps by chitting them, which will give you quicker results after planting. Chitting means leaving your seed tubers in a cool, light, frost-free location and allowing them to develop shoots or chits. These chits should ideally be short (an inch or two), and dark-coloured, not long pale and spindly. Opinions vary concerning the merits of chitting, but I do use this method – simply because it works for me. I also recognise that potatoes will grow quite successfully without going through this process. It just means that they will take longer to push through the compost after planting. 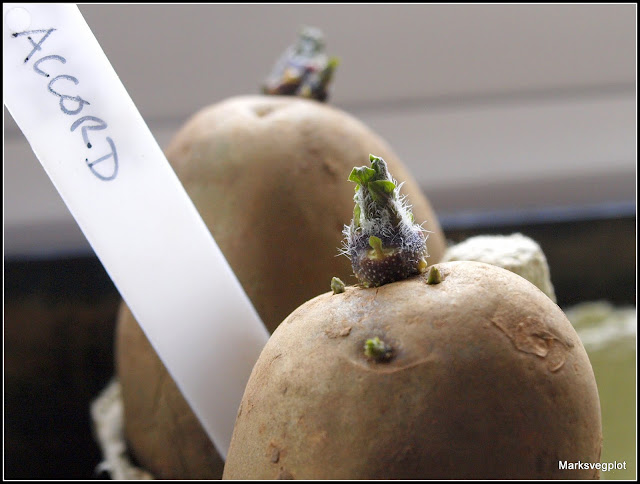 So, assuming your seed tubers are ready for planting...


Put a 2-inch (5cm) layer of compost into the bottom of the pot. Sprinkle on a generous handful of pelleted chicken manure or proprietary potato-food. Cover the fertiliser with another 2-inch layer of compost.


Place your seed potato tubers in the compost, with the “Rose” end (the one with the majority of the shoots) facing upwards. Settle them firmly but gently into the compost. If the compost is very dry, water it with a watering-can equipped with a fine rose, but don’t make the compost very wet. Cover the potatoes with compost to a depth of approximately 2 inches. 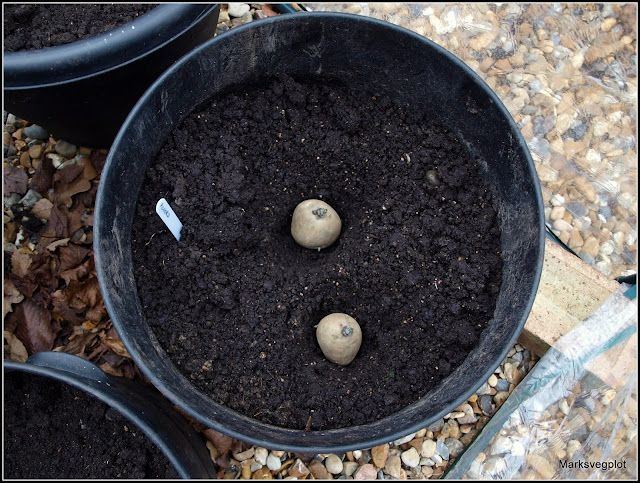 Place the containers in a sheltered spot (you may wish to cover them with wire mesh or something, to dissuade animals from digging in them!) and wait. Inspect the containers every couple of days.


Once you see the shoots emerging above the compost, cover them with another layer of compost. Keep repeating this until the top of the container is reached. You may need to start watering at this stage too. 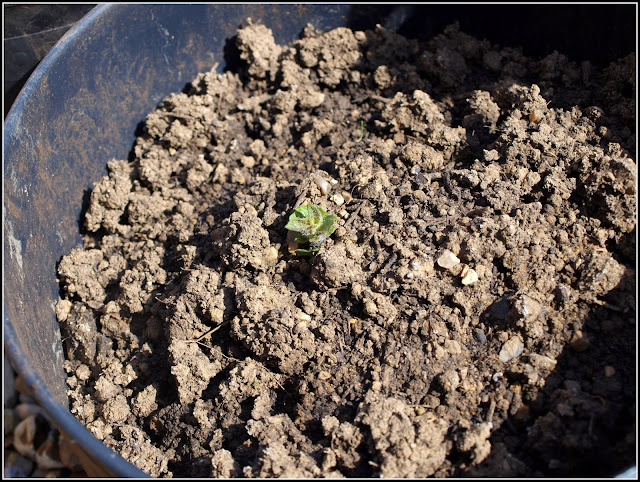 Once the leaves begin to open out, most of the work has been done. From this point onward it’s just a case of keeping the containers properly hydrated, so you need to check this every few days. Be aware that potato plants can get quite big! 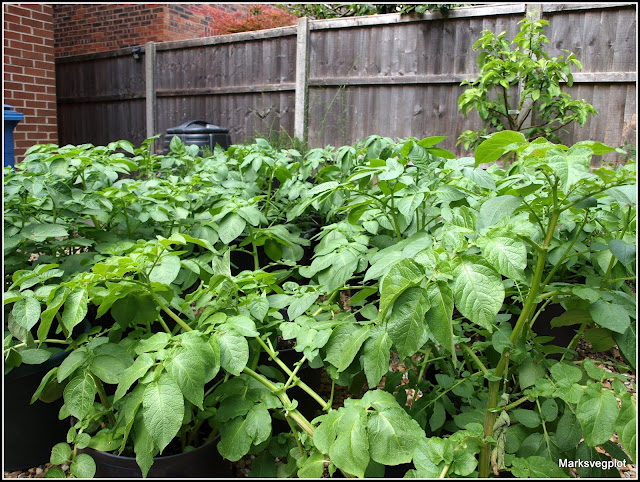 The foliage of potatoes can easily be damaged by frost, so if cold weather is forecast, it is a good idea to give your plants some protection – perhaps with horticultural fleece, or even some layers of newspaper. Mine have the luxury of some little plastic greenhouses, which have zip-fastened openings in the tops so that they can be opened or closed according to weather conditions. 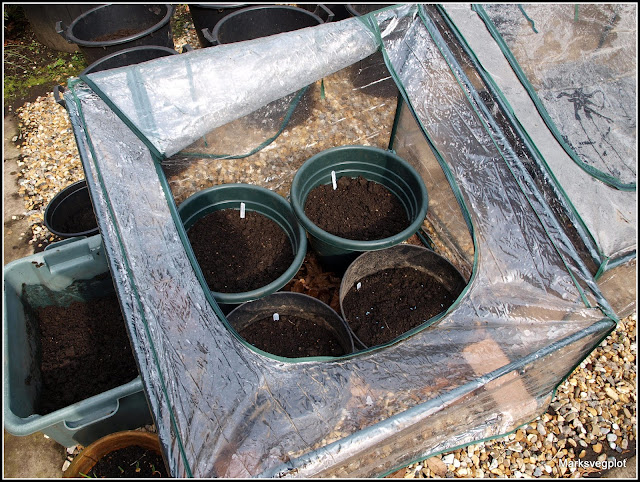 First Early potatoes are normally ready within about 10 weeks from planting. Second Earlies normally take about 13 weeks, and Maincrops about 20 weeks. 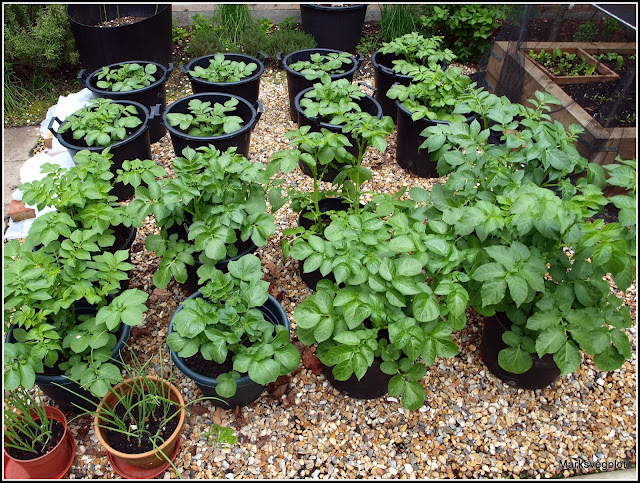 Elapsed time is only ever a rough guide, so how do you know when the potatoes are ready for harvesting? One sign that viable tubers have formed is the appearance of flowers on the plants. This is not a foolproof indicator though, because not all varieties produce flowers. A better indication is that when the tubers are mature the foliage (sometimes called “haulm”) begins to go yellow / brown, flops over and dies down. It the foliage is still upright, then the plant is still growing. Some people like to leave their potatoes until the foliage has completely died down, to maximise yields, but I prefer to harvest a bit sooner so that the potatoes are only just mature, and hence not too densely-textured. This particularly applies to Early varieties, which are definitely best harvested young. 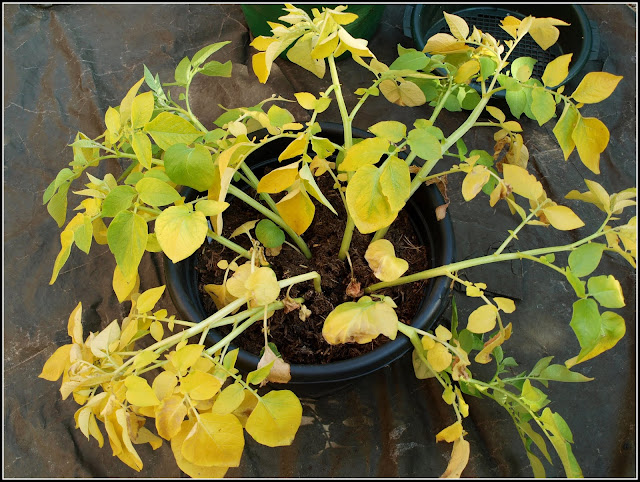 One of the benefits of growing potatoes in containers is that harvesting is incredibly easy: you just up-end the container and tip out the contents. I usually do this over an old groundsheet so that I can spread the compost around to help me find every last little potato. 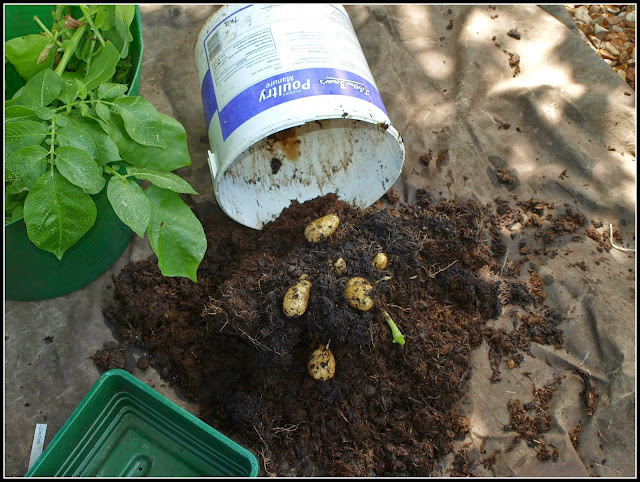 You might be wondering what is a typical yield from a tub of potatoes. I find that I get something like 500 – 700g of new tubers from each seed tuber (I grow mostly Earlies), so if I plant two per tub that means I get about 1 to 1.4kgs per tub. Each seed tuber usually produces at least 10, sometimes as many as 25, new tubers, depending on variety. Some produce lots of little tubers, others make fewer but larger ones.


In my little garden I don’t grow enough potatoes to make long-term storage an issue, but if you do grow a lot and want to keep them, then the groundsheet will come in handy again – spread the harvested tubers on the groundsheet and place it in sunlight for a few hours until the potatoes have dried sufficiently to allow you to brush off any remaining compost. By this time the skins will have dried a bit too, which will help them to keep longer without becoming wrinkly. Then place the tubers in breathable containers (such as hessian / burlap sacks) and store them in a cool, dry dark place – hopefully out of reach of rodents!

I hope this little article has been of use to you, but if you have any questions about my growing-method, please get in touch and I’ll do my best to answer them.

NOTE: A version of this article also appears on the website "Diary of a Brussels Kitchen Garden". If you don't already know this site, I strongly recommend that you take a look at it, because it contains a lot of very useful and interesting content aimed a gardening in small (and especially urban) spaces.
Posted by Mark Willis at 11:00