Now that the days are lengthening again, I can feel my enthusiasm for gardening slowly returning. I'm fed up of looking out of the window and seeing bare trees and shrubs, empty raised-beds, and drifts of wet leaves that I should have cleared up in November. I want to be outside "doing stuff"!


Actually, despite not writing any blogposts since early December, I have not been idle. I have spent a fair bit of time preparing things up at the new plot I mentioned in my last post. For those of you who haven't seen that post, let me explain.... I have agreed to take over a portion of the garden belonging to some neighbours of a long-time friend. The elderly couple who own the property are no longer able to look after the garden and have called in help from other quarters. One chap cuts the grass; another prunes the tree and bushes, and I am now in charge of the veg-patch! They have said I can use as much or as little of the plot as I like, so I'm going to go easy to begin with and may expand later on. Fortunately, this new plot is only a few minutes' walk from my own house.


This is the plot, shortly after I started working on it. 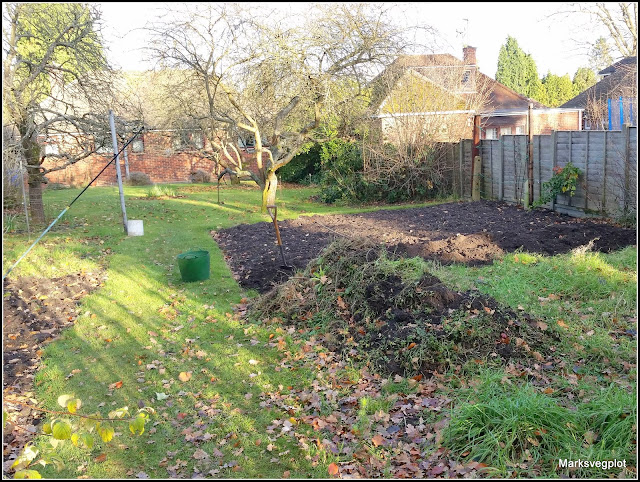 Sorry about the poor photo quality - these were taken on my phone, on a cold December morning..


The bit I am going to use initially is the area on the right in the photo above. It is very roughly 5m x 20m. 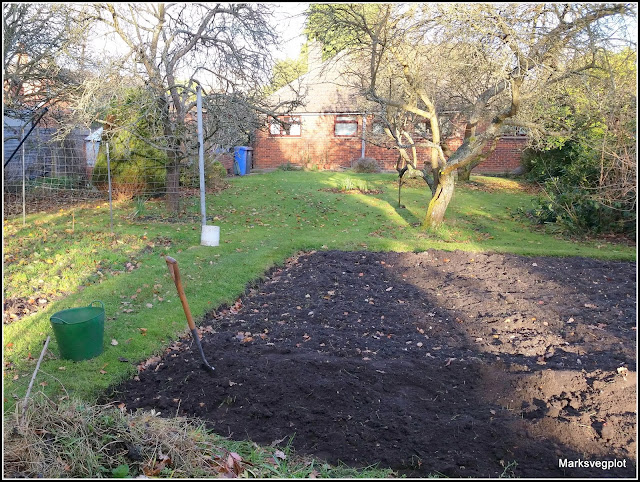 You can see that I have already done a fair bit of digging - about half of the plot so far. The soil, which has been cultivated for decades, is lovely and light, with very few stones. The garden was in active use until very recently so has not had time to get really overgrown, and my digging is mainly aimed at removing a layer of grass and annual weeds. There are only a few perennial weeds - like dandelions and buttercups - but I notice a vigorous invasion of Couch Grass from the next-door garden, which is very dishevelled. I'll have to keep a watchful eye on that. 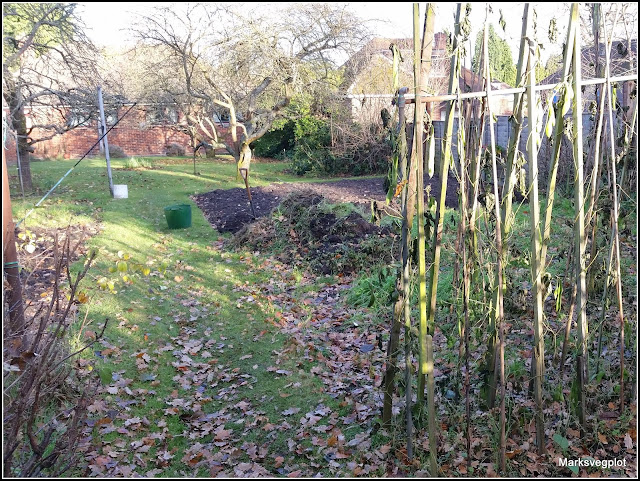 Since the photos above were taken, I have removed the enormous pile of weeds, prunings etc (which the owners had been intending to burn), and have dug a bit more, as well as removing last year's beanpoles. The beanpoles, I regret to say, were very old and rotten. They will not do for another year, so I intend to replace them with the 8-ft bamboo canes which I used to use at my own property until I acquired those Hazel poles last year. 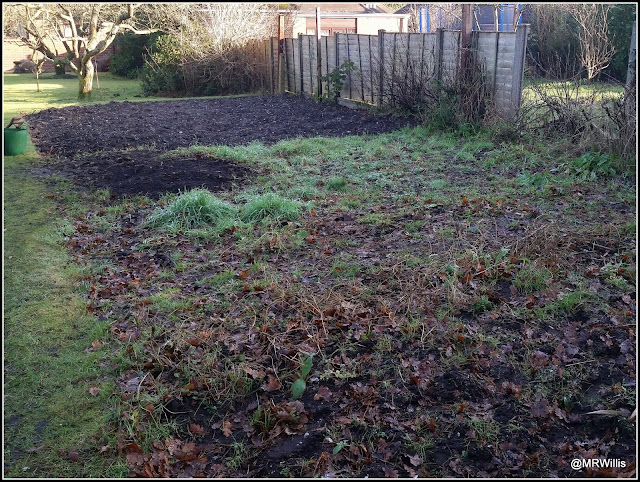 Here's a view looking in the opposite direction, showing the bit still to be dug. There are some currant bushes along the fence at the Left, and a row of Raspberries in front of the shed. I may or may not take over the currants and berries, depending on how I fare with the rest of the plot. I intend to spend about half a day per week at the new plot, so I may not have the time to do everything I would like to do. 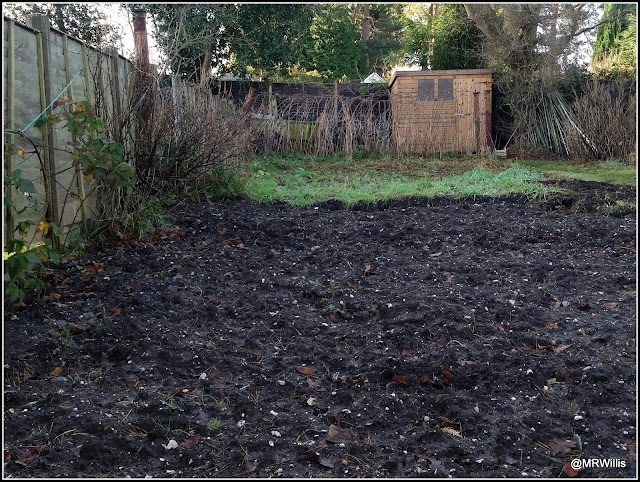 My initial plan for this plot involves growing some easy, low maintenance veg, such as potatoes, parsnips, beetroot and beans. The owners of the property have been repeatedly saving their own seeds of things like beans for many years and one of the first things I did was rescue some seeds from the last few remaining bean plants (French and Runner types). I don't know if they will be viable, because I only got them after the first frosts, but it's worth a try since their (un-named) ancestors have been grown in the very same garden since the late 1960s, so they are true Heritage Veg! Likewise, I saved a few shallots, which I intend to plant as soon as the weather conditions permit.


Over the past couple of months I have done very little gardening. I just didn't feel inspired. Because of this, the plot is looking pretty tatty, and will require a fair bit of smartening-up. I have however continued to harvest a few veggies, like theses Parsnips, Carrots and Leeks: 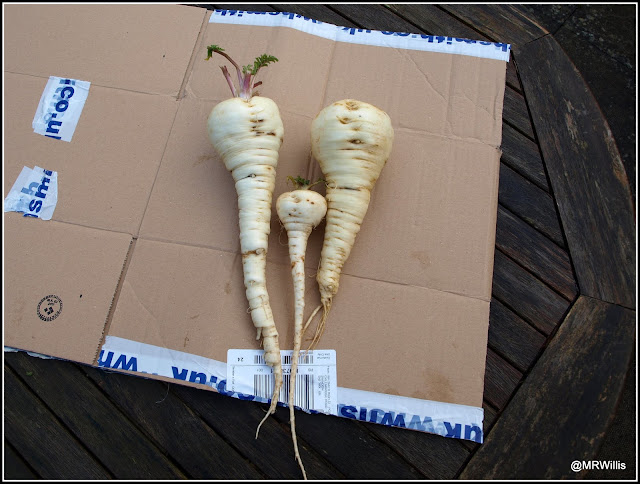 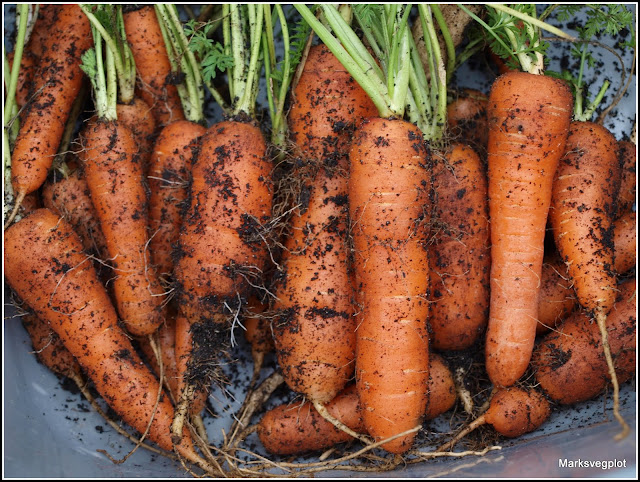 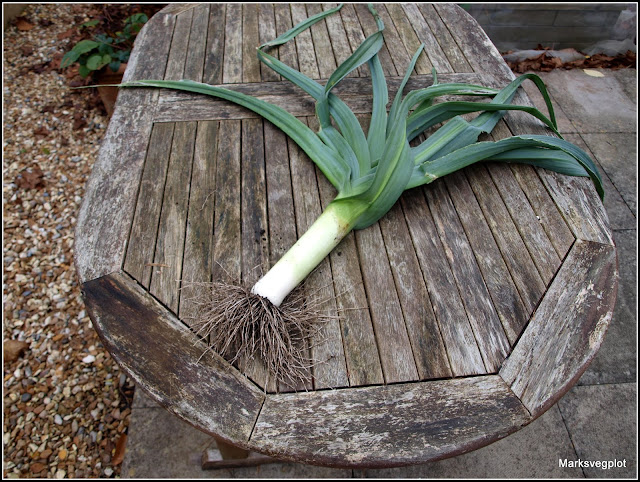 Today I made a start on the tidying-up - I emptied one of my compost bins. This was necessarily the first step, since otherwise I would have had nowhere to put all the stuff I am going to clear up. Fortunately, it wasn't as bad a task as it might have been. Having been in the bin for the best part of 9 months, the material was a nice, fairly dry and crumbly texture, with only a very thin layer of unbroken-down stuff on the top.


For the time being I have put it into some big plastic pots (I bought several more of these in the Autumn). 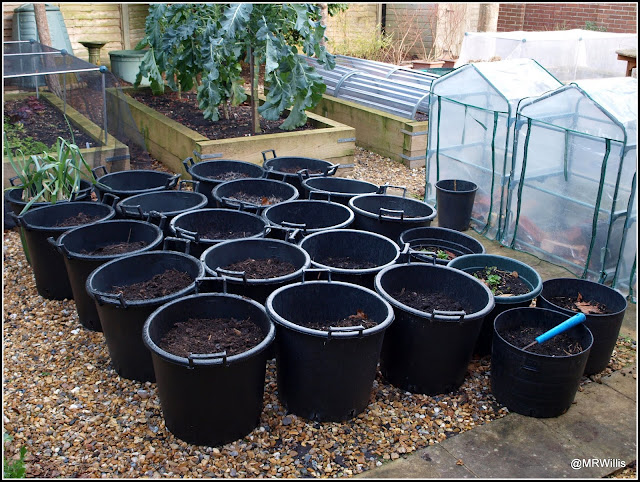 The material from that one "Dalek-style" compost bin was enough to fill 8 of those pots. The others mostly still hold soil which I used last Summer / Autumn for second-crop veggies such as Leeks and French Beans. In a few weeks time I will mix the compost with the soil and re-distribute it, then I'll use it for growing my Early potatoes. The plan is to grow the Earlies in my home garden (in pots, of course) and to grow some Maincrop ones at the new plot. I'll also be growing at the new plot some potatoes of the variety "Foremost", a First Early variety which I know the owners of the property really like. I haven't specifically discussed this, but to me it makes sense to grow wherever possible types of veg and varieties that my hosts like, since I intend to share the proceeds with them. On the 27th / 28th January I will be visiting the Hampshire Potato Day as usual, to buy my seed potatoes - a few more than normal this year, of course.


I haven't sown any seeds yet, and it will probably be another month before I start my chillis (which are usually the first), even though I have my Growhouse in which to care for them. I'm also tempted to sow some onion seeds and maybe some early cabbages quite soon. To be honest, much depends on my level of enthusiasm. After a couple of months off, I'm not getting back into the swing of things just overnight, you know!


By the way, just in case you hadn't gathered this, in the last few months I have begun to take a much closer interest in another hobby, which is Fungi-spotting. If you follow me on Facebook or Twitter, you will see that I am forever posting photos of fungi - though you probably don't see all the zillions of other photos I post in two Facebook Groups that I have joined! You'll have to forgive me then if on this blog I make the occasional digression into the mycological world. To give you a flavour of this, here's a pic of some lovely Winter Chanterelles (Cantharellus Tubaeformis) which I picked some weeks ago... 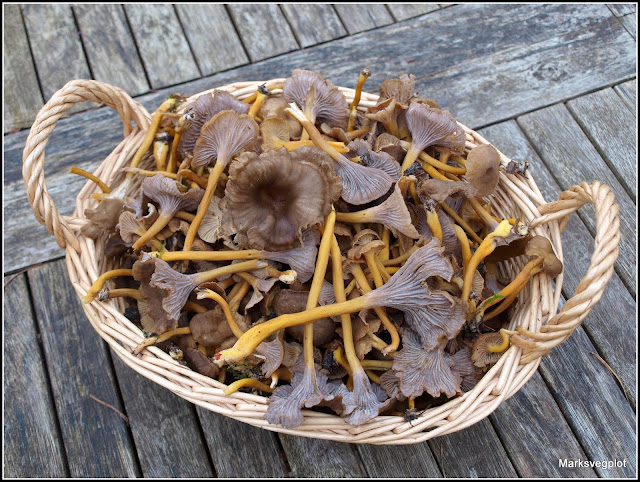