Remember the chillis on Death Row? Well, I have reprieved them - for now at least. I have made space in the garage for three of them (the other 3 are still in their mini-greenhouses). 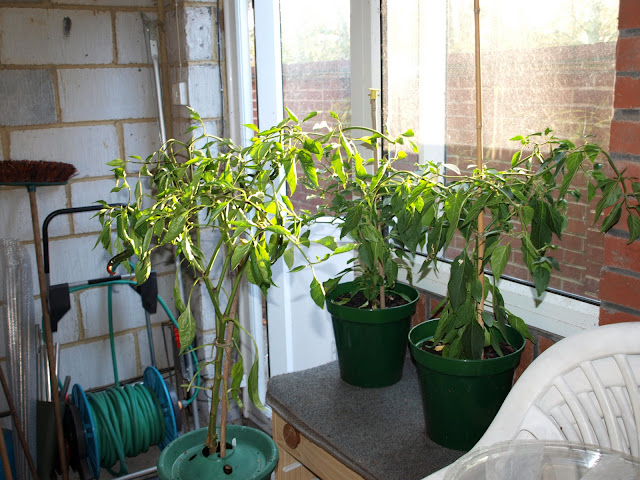 We have a double garage. One side occasionally hosts Jane's car, but the other side is permanently devoted to storing "stuff" - which includes things like garden furniture and bamboo canes. The garage is pretty dark at the best of times, because it only has one window, but I have positioned an old chest of drawers next to the window and a small garden table next to that, and these are what the chilli plants are now standing on. They won't get as much light as they would like, nor as much warmth, but it will be less uncomfortable than being outdoors!

The "Hot Portugal" has no more fruits on it now, but "Fuego F1" and "Pinocchio's Nose" have a few, some of which are ripening:

Not even in the same league as Hazel's greenhouse, but it's the best I can do!

Talking of reprieves, by the way, I have also potted-up the Runner bean "tuber" that looked like a Sweet Potato, and that is in the garage too. I'm intrigued to see whether it will survive and re-sprout next year.
Posted by Mark Willis at 17:30