I have learned the hard way that it is not sensible to sow cucumber seeds too early. I don't have a greenhouse or polytunnel, so all my cucurbits are grown outdoors, and in the past I have often had to expend far too much time, effort and ingenuity in keeping alive some spindly little cucumber plants amidst floods of cold rain and gales of bitingly-cold wind, when it would have been better to delay a week or two. Seeds sown later will usually produce stronger plants and will grow more rapidly. With this in mind, I believe that Early to Mid-May is the best time to sow seeds for cucumbers and other cucurbits, such as squashes and courgettes.


This year I am growing three distinct types. The first is what I call "cocktail cucumbers" - ones that produce small fruits (about 6ins / 15cm long). I think these are more flexible for use in the kitchen than the big long ones, though many of them do have quite tough skins which need to be peeled off. The second type are ones that are grown to produce masses of tiny fruits for pickling as gerkhins or cornichons. Their fruits do grow bigger (again, about 6ins / 15cm) if you leave them, but are traditionally picked much smaller. The third type is a squash, not a cucumber. It is a Butternut variety called "Butterfly F1".


Many cucurbit seeds, particularly of F1 varieties, are quite expensive and you don't get many seeds in a packet - maybe just 6 or 8 - and the seeds are quite big, so it is eminently practical to sow the seeds individually in separate modules, which makes planting-out much easier in due course. However, I have recently taken to buying many of my seeds from Lidl (the German supermarket), and these are typically much cheaper and the packs contain a lot more seeds. A lot of their seeds are of varieties that are not very common in the UK too, which appeals to me. Last year I bought "Vorgebirgstrauben" and "Delikatess" from Lidl, and both varieties did really well for me, so I'm growing them again, along with another one called "Venlo Pickling".


Since the Lidl packs all contained loads of seeds I felt justified in sowing two seeds per module, as a sort of insurance against poor germination, whereas with the more expensive Big Brand F1 varieties I sowed only one per module. Of the latter I have two varieties - "Diva" and "Passandra". I'll only need one, possibly two, Butternut squash plants so I sowed three seeds in individual modules.

I sowed my seeds in moist compost and kept the modules indoors, where the daytime temperature would have been in the low 20s Celsius most of the time, until germination, which was amazingly rapid: I sowed the seeds on a Sunday, and most of them germinated on the Wednesday or Thursday. I needn't have worried about poor germination, because almost all the seeds have come up. 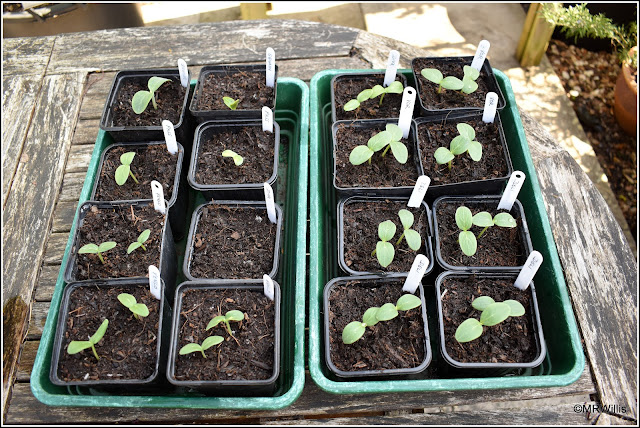 There has only been one no-show: 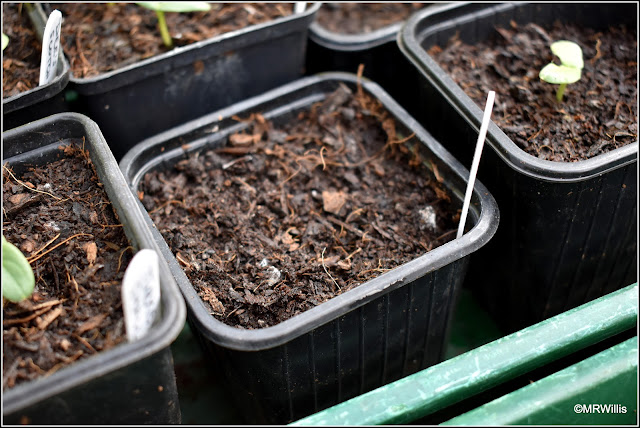 Which variety was it? Yes, you guessed it - "Diva"! 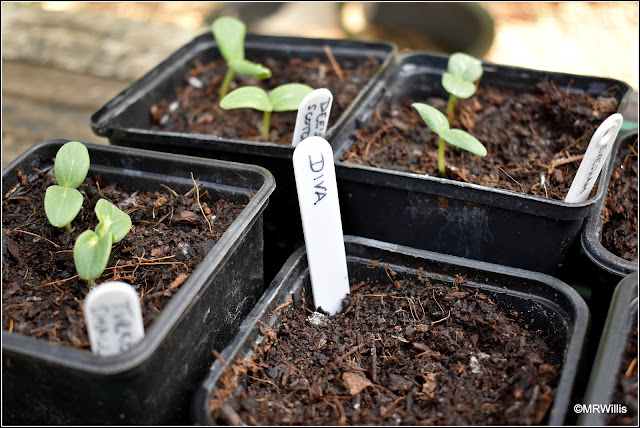 Since many of those modules have two little plants in them I now have the job of selecting the best one and removing the weaker one from each. This always feels cruel, but honestly it is for the best. The seedlings will do better without competition from rivals. Obviously this is not a good approach if you are using expensive F1 seeds - sow those in separate modules from the start! 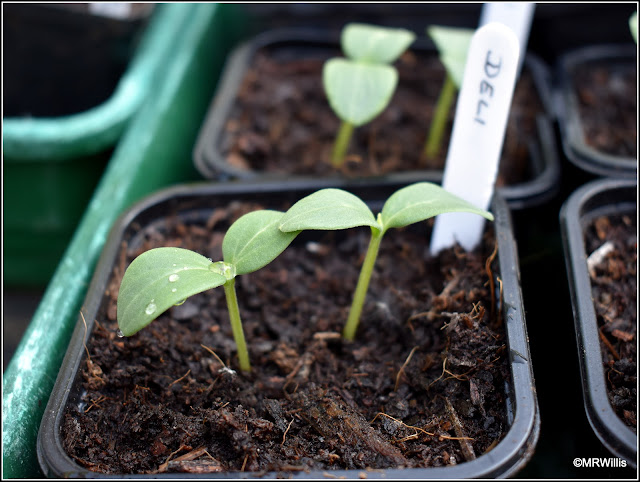 I'm going to keep my cucumbers indoors overnight for the next week or ten days, but I will take them outside for a few hours a day whenever I think it is warm enough, so that they gradually become accustomed to outdoor conditions. They certainly wouldn't survive the extremely cold night-time temperatures we experienced earlier in the week!
Posted by Mark Willis at 12:00