In the absence of a greenhouse or polytunnel, all my cucumbers are grown outdoors - and quite successfully too, I must add. Of course this means I have to judge when the weather is right, and not plant them out too soon. Well, keeping a close eye on the 10-day weather forecast, I reckoned that yesterday (Tuesday) was the right time to do it - lots of sunshine during the days, and mild nights for the foreseeable future.

I had everything ready to go for the task - tubs filled with compost and enhanced with fertiliser; poles (Hazel rods 6.5 feet tall, tied at the top) erected; plants hardened-off - so planting was actually a very quick job. 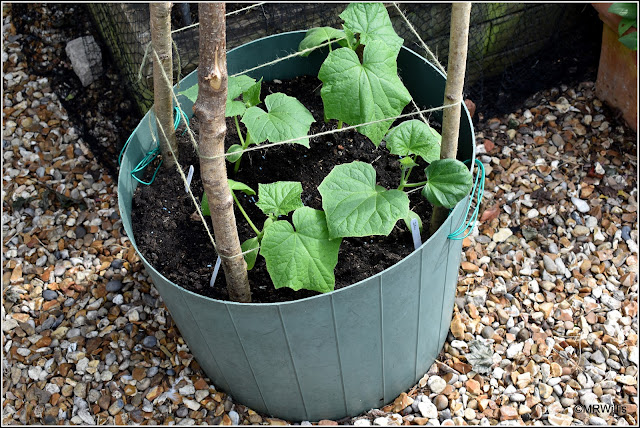 The only advice I can offer here is to avoid planting too deeply. Cucumbers dislike having their stems in contact with damp / wet soil, so if you can, plant them on a little mound.

This is the first of my two cucumber tubs. I've put in it 2 x "Delikatess" and one each of "Diva" and "Passandra". These ones will be used to produce what I'll call "normal" (though small) cucumbers. 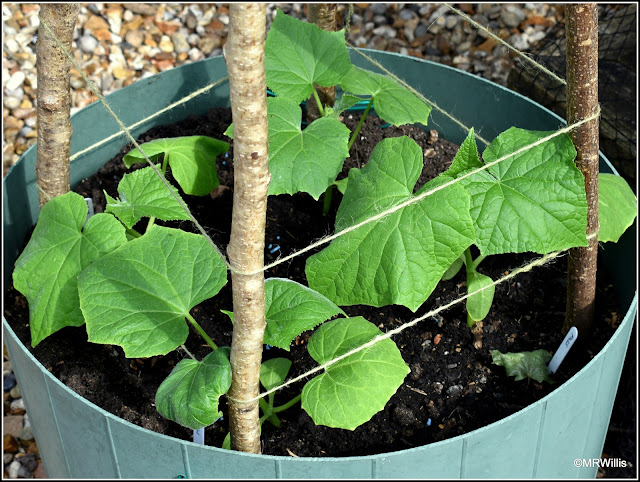 The second tub also has four plants, 2 each of "Vorgebirgstrauben" and "Venlo Pickling". These ones will be used to produce tiny fruits for pickling as gherkins of cornichons. 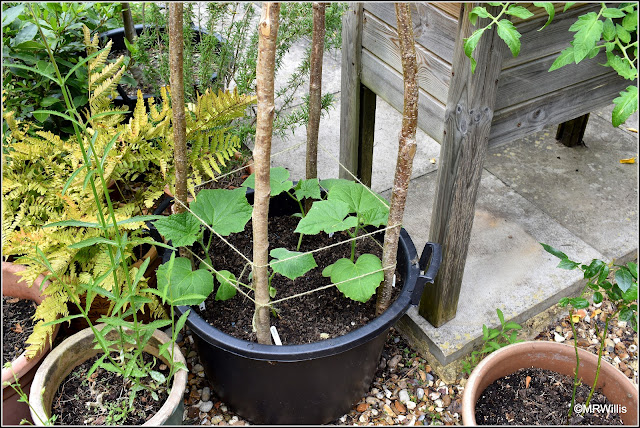 You might be wondering what the lines of string are for. Well, they serve two purposes: to provide some support for the plants until they manage to grab the Hazel poles; and to deter the nocturnal animals. I have found that sometimes a fox will actually climb into a big pot if it believes there's a chance of finding something edible in it (a juicy worm, perhaps?). 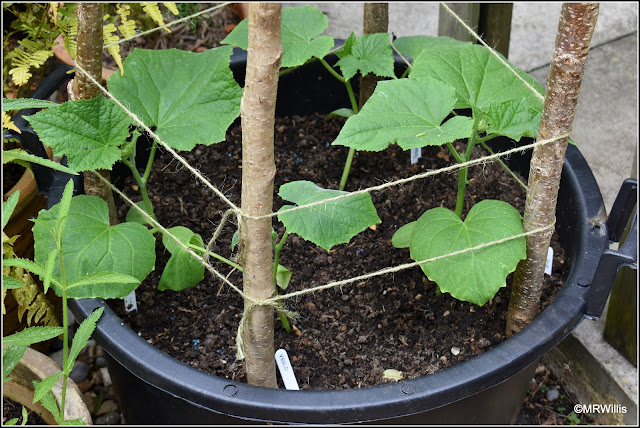 With the weather these last few days having been sunny and hot, I thought carefully about when to plant the cucumbers (I mean what time of day). I didn't want them to get scorched and dehydrated, so I waited until the site of their new home was going to be in the shade for at least 12 hours. I've also moved a potted Bay tree a few times, arranging it so as to provide a bit of shade for the young cucumbers. Once the plants are established they will enjoy the direct sunlight, but they do need a chance to settle in first.

In my usual fashion, I have some spare plants just in case there are any casualties, and I have to admit that I have used one of them already.... the rootball of one of the young plants disintegrated as I was removing it from its pot, and the roots were damaged, so I have discarded that one and used a spare.
Posted by Mark Willis at 18:00