The season of crusts and jellies - Part 2: crusts

The other day I described a few of the jelly fungi that you can see during the Winter. Today I'm going to cover some so-called crust fungi. My loose definition of this term includes a couple that are really brackets, not crusts!

A crust fungus is often resupinate for at least part of its lifecycle. This means that it is effectively upside down and lying flat over the surface of its substrate (the thing it is growing on), like this: 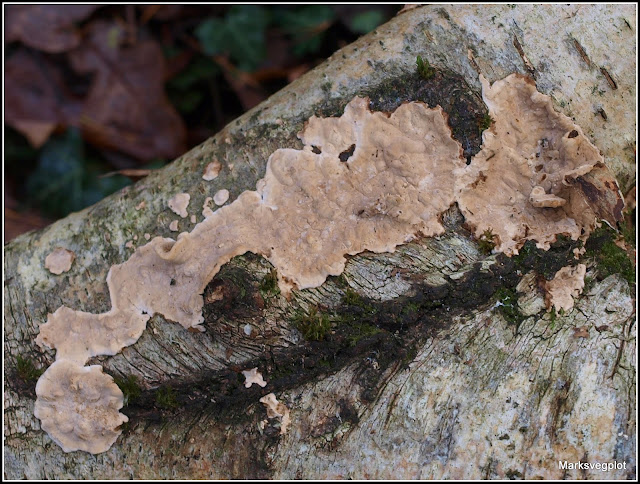 Some fungi of this type will grow underneath a log, where they are not visible until you lift the log, but more often they grow in places where their upper surfaces are visible - such as along a horizontal log, or on the vertical surface at the end of a log, as seen here: 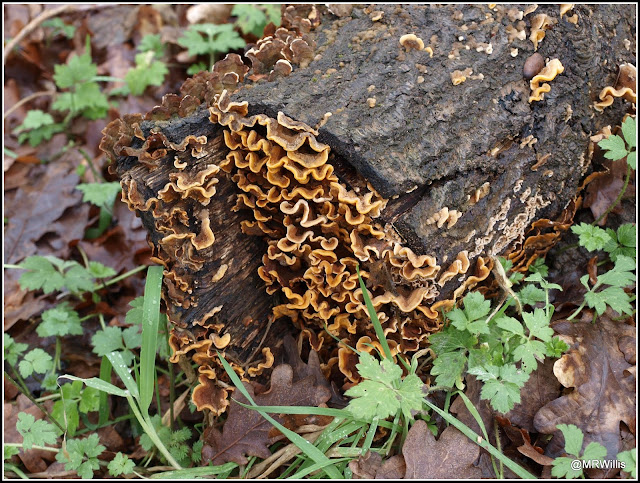 In cases like this, the fungus becomes less resupinate, and more like a bracket - that's to say it juts outwards from its substrate and forms cups or ledges. The Stereum hirsutum (Hairy Curtain Crust) seen above is a good example.

Sterum hirsutum is a very common fungus, and grows prolifically in the Winter-time on fallen wood of deciduous trees, such as Oak and Beech. The upper surface of this fungus is very hairy (hence its common name), and brightly coloured in shades of yellow, orange and brown, with a yellowish-cream edge.


The undersurface is smooth and lacking in visible pores, as shown here. I pulled off a section to photograph it.


The undersurface of a crust or bracket fungus is normally a key feature when trying to make an identification. As a general rule, all the Stereums have smooth undersurfaces, whereas the visually rather similar Trametes fungi have (usually white) pores - little holes.

Look at this fungus, which is somewhat similar to the Stereum hirsutum in terms of shape and colour. It is not a Stereum though, it's a Trametes. 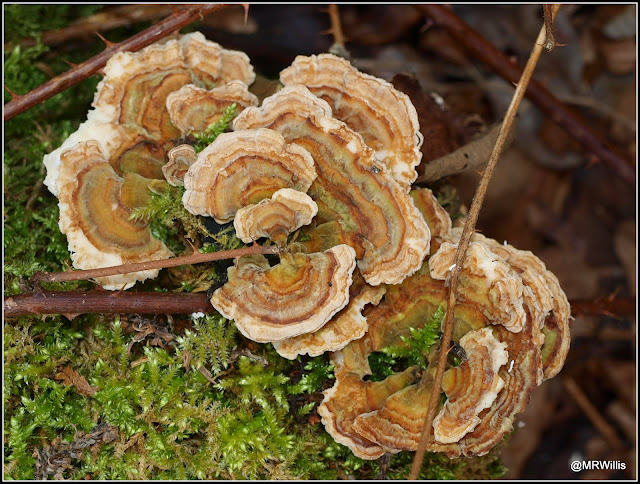 How do I know? I looked underneath. It has white pores. 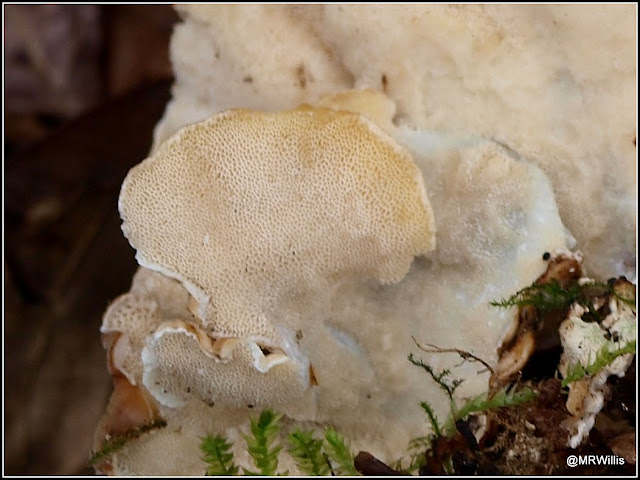 Trametes versicolor - Turkey Tail - is perhaps the best known of the Trametes types, and as suggested by its name it comes in many different colours, with blues and browns being the most common.


Just in case you thought this was easy, if a fungus looks like a pale grey Trametes from the top, yet has blue-grey pores instead of white, it is probably a different thing altogether! It's probably Bjerkandera adusta - Smoky Bracket.


Nothing in the world of fungi is ever straightforward, and most fungi seem to have one or more lookalikes. A prime example is Stereum ostrea, the False Turkey Tail. I think you will agree that when seen from the top it could easily be mistaken for a Turkey Tail. 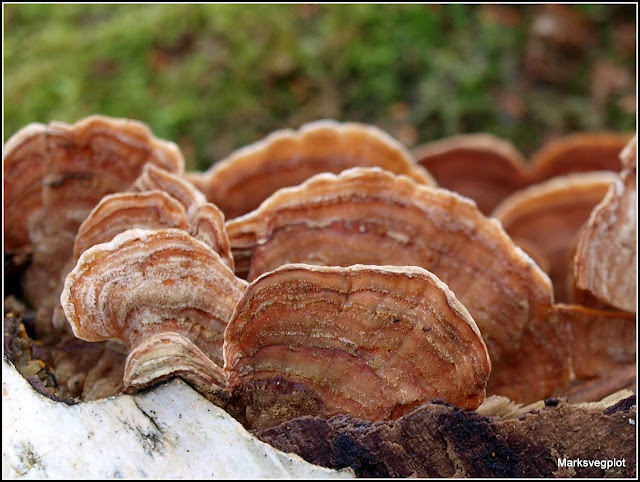 But you know by now that it has a smooth undersurface without pores! 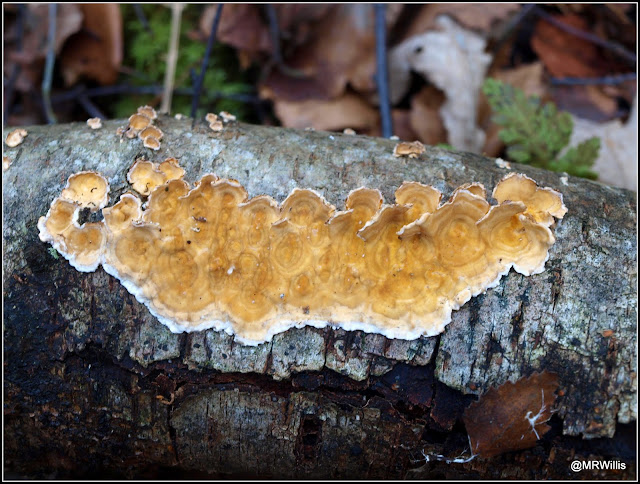 There is one other fungus that I want to cover in this post. It is Laxitextum bicolor. It doesn't appear to have a common name.


This is what I think of when the term "Curtain Crust" is mentioned. It actually looks like a curtain, doesn't it? Apparently this fungus is quite rare, or perhaps more accurately under-reported, because it is often misidentified as Stereum rugosum, the Bleeding Curtain Crust, and reported as such.

This fungus certainly grows on Velmead Common, in Fleet, where I have seen it several times, and just recently I saw some in Southwood Woodlands which are also close to Fleet, so it's evidently not rare in North-East Hampshire.


The types of fungi I have described here are not normally considered edible. Even if they had a good taste, and did not contain toxins, they are mostly extremely tough and therefore not palatable. Some of them do (allegedly) have medicinal properties though. For instance, a tincture made from Trametes versicolor has apparently had some success in slowing the development of certain types of cancer.

If you are interested in this subject and want to learn more, I strongly recommend the website First Nature, which is a mine of useful information.
Posted by Mark Willis at 12:30