So far this Autumn our weather has been comparatively mild. Yes, we've a had a bit of rain and a few very blustery days, but nothing extreme. I think we have had frost only on two occasions. This has meant that some of my crops have kept going longer than usual. I harvested my last tomatoes in mid-November. These last few have been ripened indoors and were consumed only yesterday.


I moved a few of my chilli plants under cover before the frosts came, some into the garage and some into my big coldframe. They have continued to produce ripe fruit. This one is my "Cozumel" plant, a variety which struggles to produce ripe fruit during a normal year, but with this year's hot Summer and now the protection of the coldframe it's doing OK. 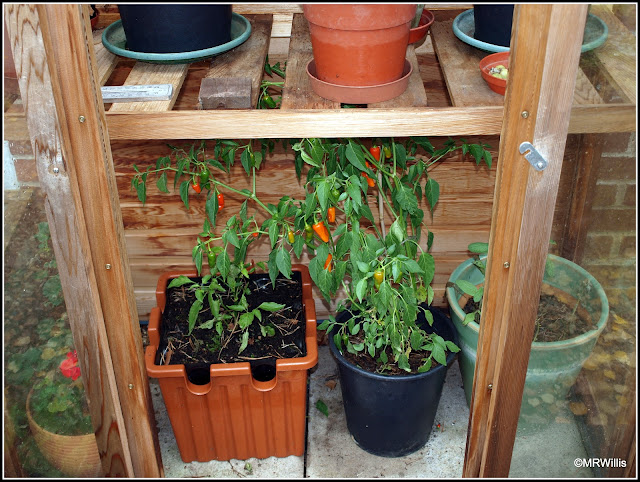 I'll be honest and report that I did pick a few semi-ripe fruit the day before our first frost was forecast, just as an insurance policy. They have ripened and now dried indoors, and will be used for next year's seed.

Out in the open I still have quite a few nice vegetables waiting to be harvested. For instance, my carrots are still going strong, although we have already eaten lots. I'm always surprised by how many carrots I can get out of one 1 x 2.4 metre raised bed. I only pick a small number at any given time, and keep them in a Stayfresh bag in the fridge. Leaving mature carrots in the ground in a typical Autumn is always a gamble. There is a risk that slugs will attack them, and some are likely to rot in the cold wet soil. Some people harvest their carrots all at once and store them for Winter use in boxes of damp sand, but I've never done that, though maybe I would if I grew them in an open plot rather than in a raised bed, which is easy enough to protect if need be.

Another crop that is just going on and on this year is the Kaibroc. I would have expected it to have finished long ago, but the two plants I have growing in a 35-litre container are still continuing to pump out spears! Yes, OK, they're getting progressively smaller each time, but they are still worth having.


In one of the raised beds I have 3 Purple Sprouting Broccoli plants coming along.


I often grow more PSB than this, but this past Spring we had far too much of the stuff (and Jane doesn't like it as much as I do, so we can't reasonably have it every day when it's in season!), so I've reduced my numbers. Actually this was fortunate, because the bed in which they are growing is my least good one, and I think if there had been more plants in it they would have struggled to survive the hot Summer. The bed dries out very quickly because it is nearest to my neighbour's enormous Leyland Cypress tree, which sucks up more than its fair share of water. Or at least, it used to.... a couple of weeks ago my neighbours had the tree cut down. Hooray!

I've mentioned before that I was late sowing and planting my Endives this year, and I hadn't expected to get any of them to maturity. However, thanks to the milder weather and my trusty Longrow cloches, they are still soldiering on, and may yet turn into something worthwhile. When frost is forecast, I cover the cloches with a double layer of fleece, weighed down with bricks.


I have a few more Endive plants in individual pots, covered with plastic bell cloches, but these are not looking so good. Many of the leaves have brown tips, particularly where they have been touching the cloche. I think that the cold affects an individual pot a lot more than a group of plants in a tunnel cloche, providing a bit of mutual support for each other.


To the uninitiated, my bed of Parsnips probably doesn't look very attractive, but as experienced gardeners know, the fact that its foliage has died down means that a Parsnip is ready for eating, and I know that this bed is full of lovely veg! And hopefully it will be nice and sweet, now that we have had a couple of frosts, because the cold promotes the conversion of starches to sugar. 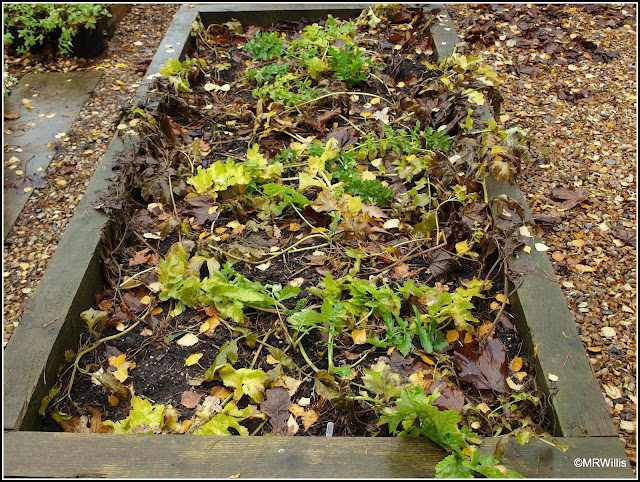 I have decided to use the Parsnips from my Courtmoor plot before these ones, but I did dig up a sample from the bed pictured above, just to see what they are like. First indications are that this year's crop may be a little quirky... 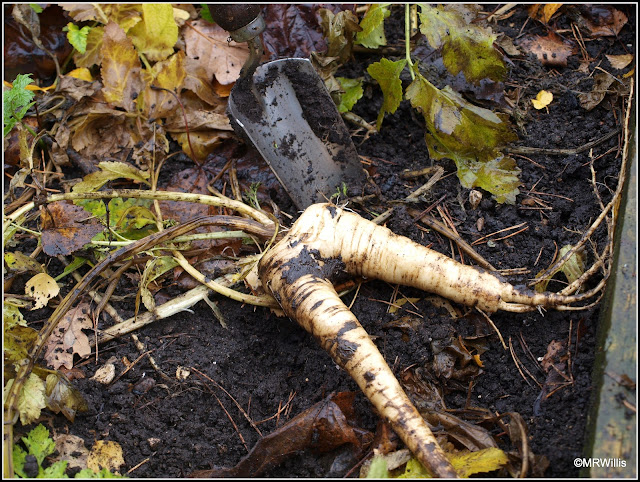