Onions - results of my first attempt

This year I have been growing onions for the first time ever. I have grown Shallots before, and Spring Onions, but never "proper" onions. In order to educate myself about this subject, I planted sets of two different varieties and I also grew some from seed. The ones grown from sets were "Sturon" and "Red Baron", whilst the ones grown from seed were "Long Red Florence".

I harvested a small number of them last week as a sort of trial run to see if they were mature, as a result of which I decided to harvest most of the remainder on Monday this week. 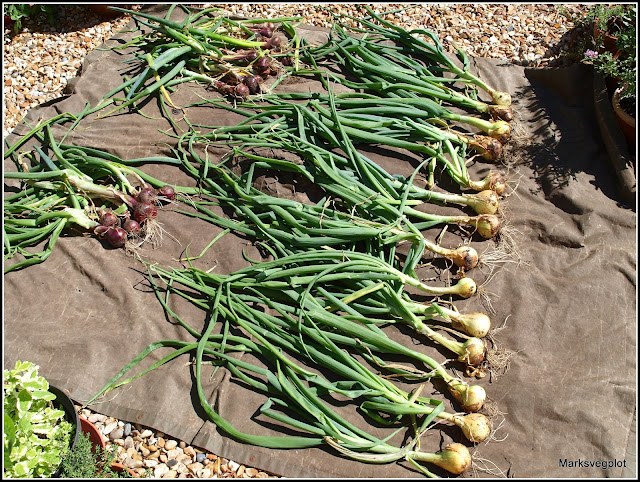 I suspect that the purist would say "You should have left them a bit longer", because the foliage on most is still quite green. However, I didn't think they were going to grow much bigger, and anyway I wanted the space freed-up for planting my endives and chicories.

There were 14 pretty decent "Sturon" ones, seen in the foreground here. None were huge, but nor were any tiny. 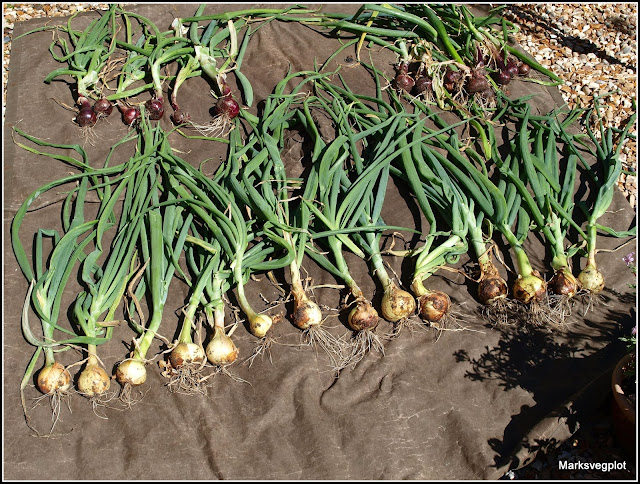 In terms of quality I'm fairly happy with these - though of course with the amount of cooking we do here, a quantity like that is only going to last us 10 days if we're lucky! It hardly seems worth drying them because they are not going to be stored for long.


The "Red Baron" ones were a big disappointment. About 60% of them bolted and are unusable. This week, I got six that were worth having (and small ones at that). Added to the 3 from last week, that's hardly a big crop.


The ones that had bolted produced big thick fleshy stems, even though I had pinched-out the "scapes" as soon as I saw them appear. The bulbs went incredibly dense and hard - completely useless in culinary terms.


As I have said before, I believe that the difference in results is due to whether the sets were heat-treated or not [this process inhibits bolting]. The "Sturon" ones definitely had been heat-treated, but I don't know whether the "Red Baron" ones were or not. There was certainly no mention of it on their packaging. All other factors were the same, because both types were planted in the same raised bed on the same day.

I still have another 8 "Sturon" to come, because I planted them a bit later than the main batch. They are still quite small, so I will leave them for another week or two.


Meanwhile, the "Long Red Florence" ones are still growing very nicely. From a maximising yield point of view I think they are still too small to be worth picking (though they would probably be very nice to eat), so they too are going to be left for a while.


When assessing my crop of onions, you have to consider that it all came out of half of one of my raised beds (which are 1 metre x 2.4 metres). When you take into account the row of leeks which is still there, it means that all those onions came out of a space approximately one metre square. At least I now a have a bit of space to plant my chicory! 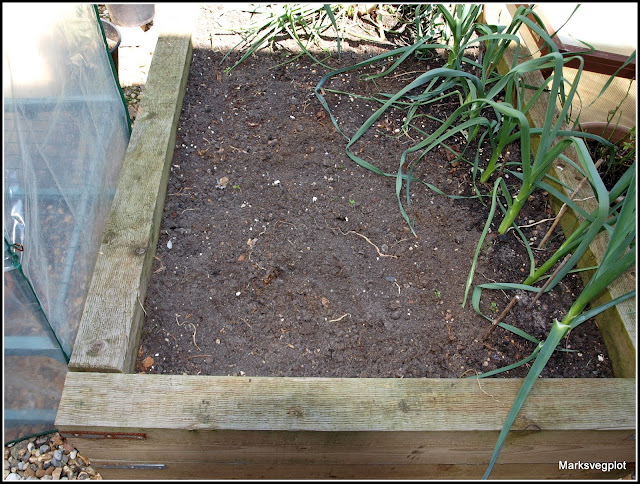 Those leeks are not looking too bad either, but they will probably be happier now that the onions have gone, since they will get more light and breathing-space. 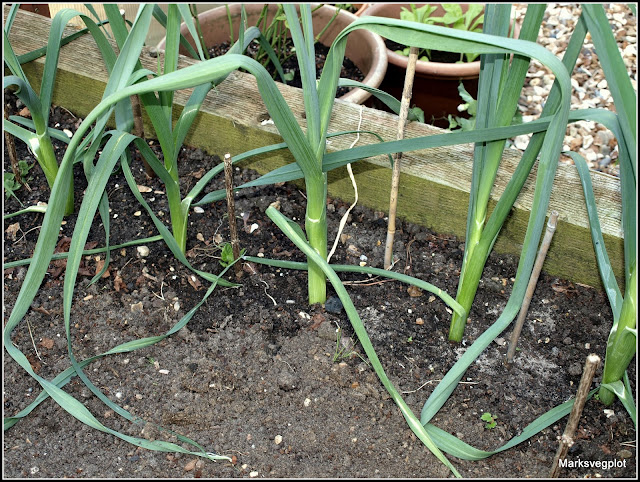 As long as they don't bolt beforehand, I planning to harvest the leeks in the Autumn.
Posted by Mark Willis at 12:30