A technique for growing trailing tomatoes

One of my favourite tomato varieties is "Maskotka", which I have grown for many years now. It produces red fruits that are rather larger then the usual cherry tomato. It has a rather unruly trailing habit, and lends itself to being grown in baskets or elevated containers. Fortunately, I have such a container... 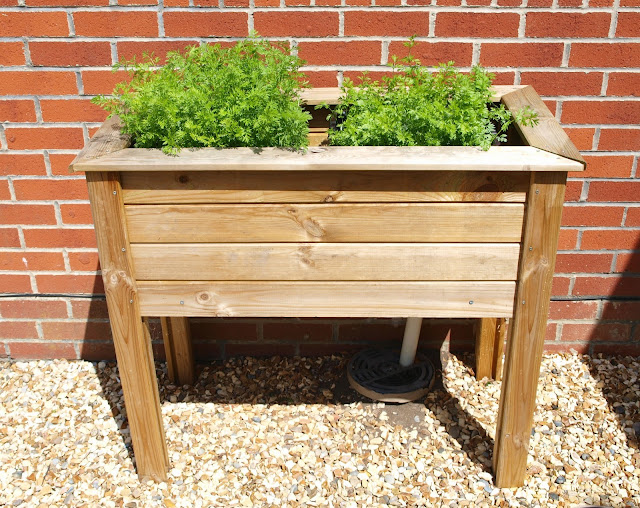 The container is officially known as a "planter". It's a wooden trough-like thing, standing on legs about 3 feet tall - very much like the things that these days some people call "veg-trugs". It conveniently accommodates two large plastic crates. I have used this arrangement several times for growing finger carrots, and it has worked well. This year I decided to have a change and grow some tomatoes in it instead.

I filled the two crates with commercial multi-purpose compost and planted each with two "Maskotka" tomato plants. This was on 11th May. I gave the plants a bit of early support with some soft string stretched between short bamboo canes. 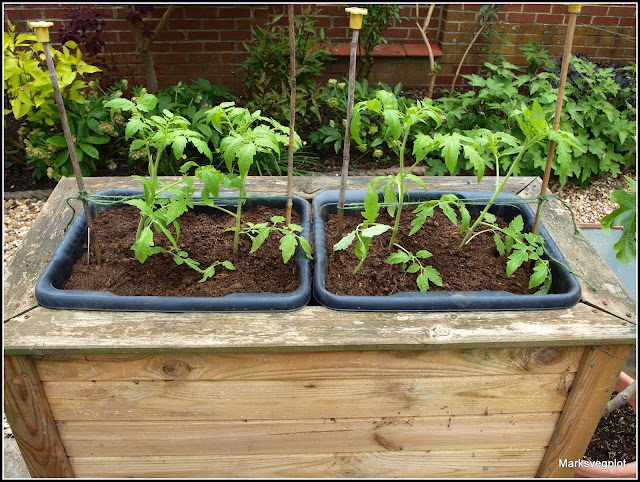 When the plants grew bigger and stronger, I removed the string and allowed the plants to flop over, arranging them such that they were fairly evenly distributed - pointing in different directions. 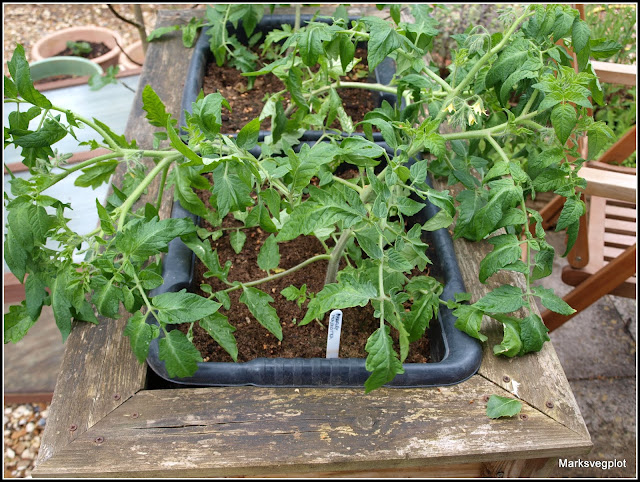 I pushed a few short sticks into the compost to keep the tomato plants in place. 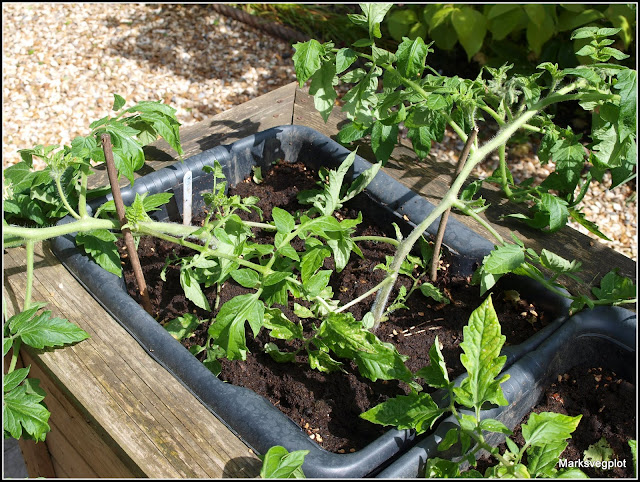 After this it was just a case of watering and feeding in the same way as any other tomatoes. I found that the compost in the crates dried out very quickly (small crates, poor compost!) and in sunny weather I had to water them at least daily, sometimes twice daily. In the really hot weather in June I was practically standing over them all day with the watering-can! As for feeding, my usual regime is a dose of Tomorite applied weekly after flowers appear. In this next photo you can see that the plants are very lush, and covered in flowers. This was 23rd June. 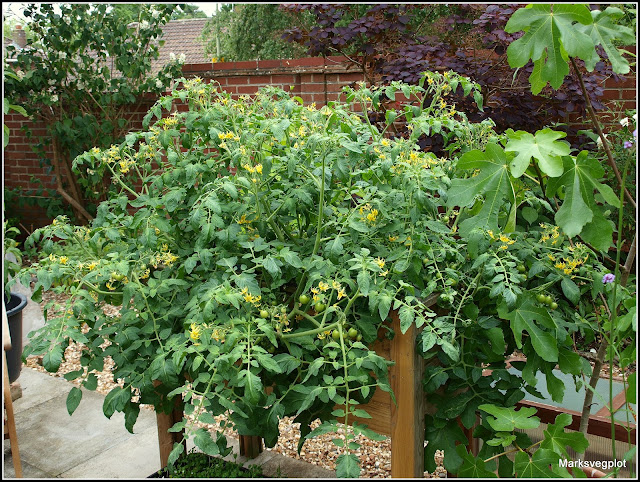 By the second week of July the plants had set lots of fruit, though it was still firmly green. 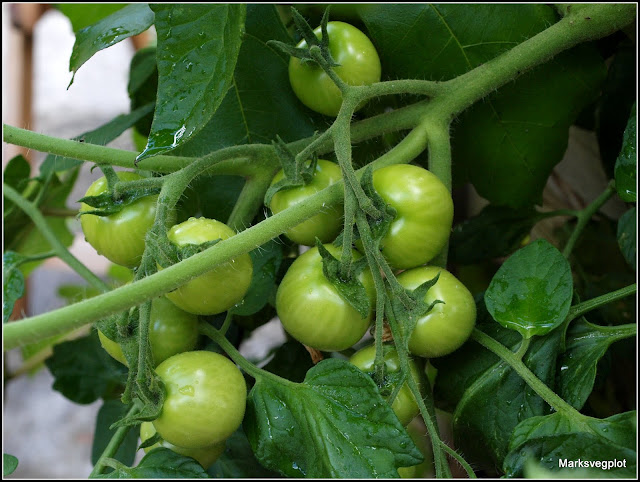 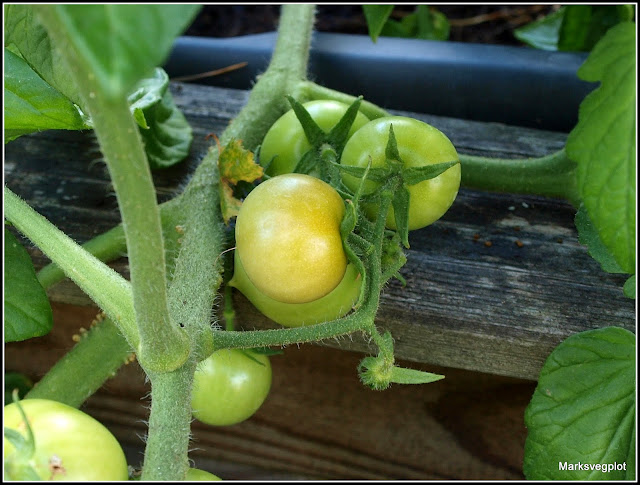 The first ripe fruit were picked on 21st July. most of the tomatoes in this next photo are "Losetto", but there are a couple of "Maskota" in there too -they are the slightly larger ones over at the right. 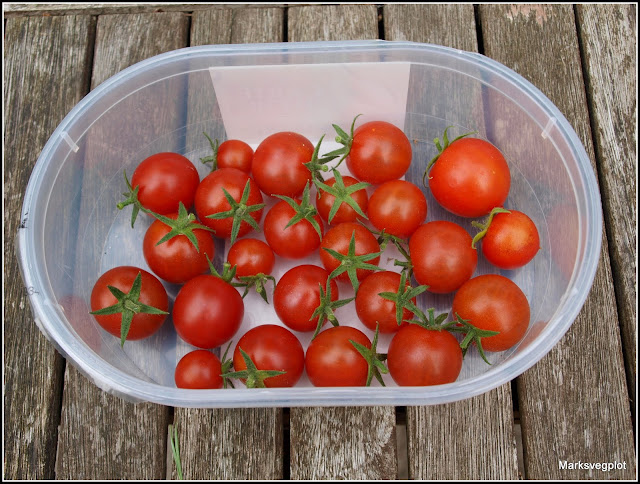 At about this time, the foliage began to die down, as is normal when the fruit starts to ripen, a natural mechanism allowing more light to reach the fruit. By this time the plants were heavy with fruit and definitely trailing. Luckily the height of the planter was just right too - the plants don't touch the ground, which makes it much more difficult for slugs and snails to get at them.


One of the things I like about "Maskotka" is the fact that the fruit ripens over quite a long period, and individually rather than truss-by-truss like cordon-grown tomatoes. 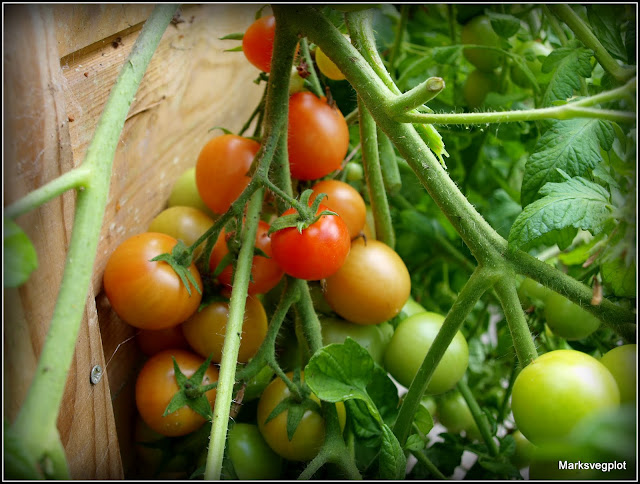 You pick some ripe ones and when you back next day there are more ready to pick, which is very fortunate since my first significant batch (maybe 20 - 25 fruits) was picked on 23rd July with the help of two of my granddaughters, who promptly demolished the lot in about 3 minutes flat. I managed to rescue only one each for Jane and myself!

Looked at from above, the plants don't seem too impressive... 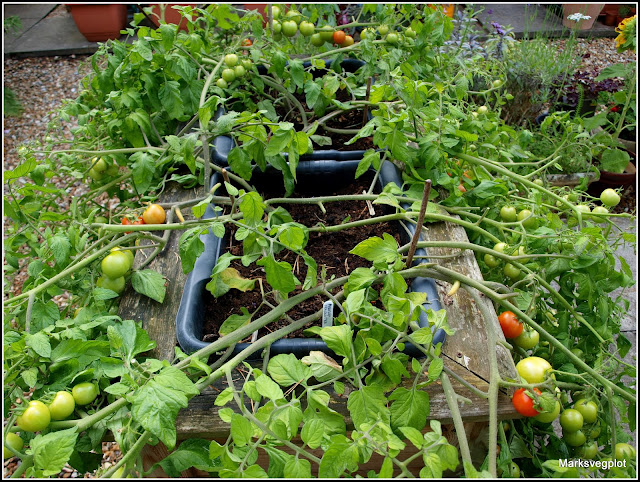 But when you look at the sides, the whole thing is "dripping with fruit"! 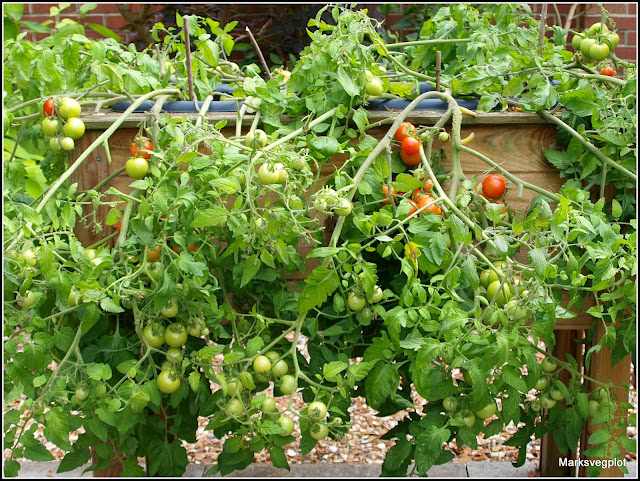 Over the next couple of weeks I expect to be taking in a steady stream of tasty little toms. Perhaps I'm going to have to keep them secret from Lara and Holly, otherwise Jane and I won't get much of a look in! 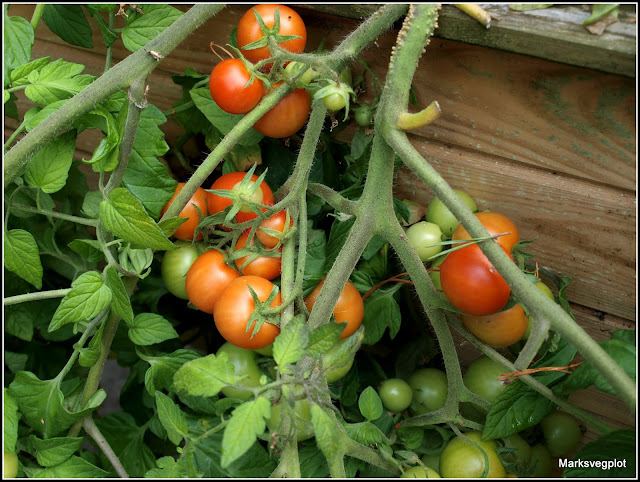 I'm pleased with the technique I have used, and the piece of kit that has made it possible, but I think that if I use it again next year I will use better compost (if I can find any!) to reduce the need for watering.
Posted by Mark Willis at 12:30