When is "Early" early?

The first of my Purple sprouting Broccoli is just about ready for picking. "Hooray!", I say, it's been a long wait.

It seems to me that some seed-suppliers' claims about their product may be unjustified. For instance, the PSB variety "Rudolph" (presumably named in honour of a red-nosed reindeer normally seen at Christmas) is supposedly an extra-early one. Marshalls claim that it starts cropping in September (!) but is best from November to January; Suttons say "from October to December (from early sowings)"; DT Brown's say "Ready as early as January", etc, etc. As you can see, despite it being the end of February now, my "Rudolph" is only just about ready for picking - and then only if I'm very selective.


The biggest of my plants this year is "Red Spear", which is a little way behind "Rudolph", but nearly ready for picking - perhaps in 10 days' time?


"Red Spear" is a variety I have grown several times. It doesn't develop such a big central flower as many other types, but it does produce a multiplicity of long spears. In this next photo it is the tall one at the right: 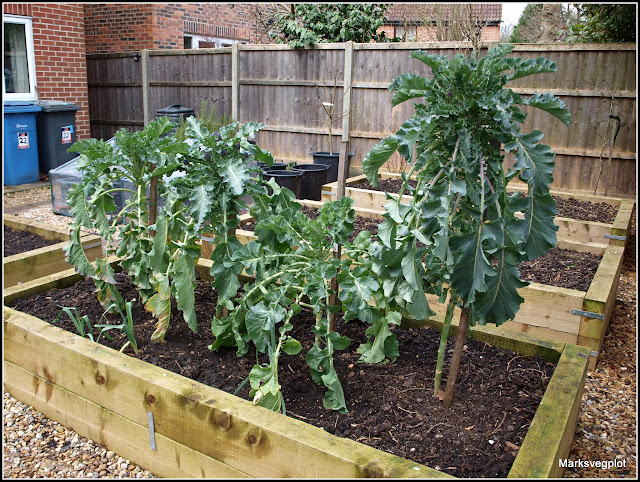 Surprisingly, my PSB plants that are furthest from being ready are the two "Early Purple Sprouting" ones. In the previous photo they are the one at the extreme left and the one second right, next to the tall "Red Spear". One of them is from Marshalls and the other is from Mr.Fothergills. There is no sign of them producing any spears just yet, but then that's OK because (despite its name) this is one that crops any time from January to April.

As you can see, one of them is very short - not that that is necessarily a bad thing, especially if you happen to have a very exposed plot or garden.


My experience with PSB (and I have been growing it for well over 20 years) tells me that it is unwise to rely too much on plant names or the advice given by seed merchants concerning sowing / planting / harvest times. All I can say is that this type of broccoli takes approximately 10 months to grow; it is sown in Spring, planted in Summer and harvested "early the following year"! [You'll have to define "early" for yourself...]
﻿
Posted by Mark Willis at 12:00