I'm sure that my regular readers will know that I'm not much in favour of sowing seeds early in the year just for the sake of being early. There are however some types of seed that genuinely should be sown early. In this category fall Broad Beans and most of the Allium family.

Unlike most other beans, Broad Beans / Favas are very hardy and will survive some pretty adverse conditions. Some types are even allegedly suitable for sowing in the Autumn, though most of the gardeners with whom I interact say that it's often a struggle to keep them going over Winter and that the benefits of doing so are marginal. Broad Beans can certainly be sown in February though, and if you do sow them at this time they can be harvested early enough to permit growing another crop in the place where they stood. I usually sow two batches of Broad Beans, at different times and of different varieties, because this means they will come to maturity at different times rather than all being ready at once. 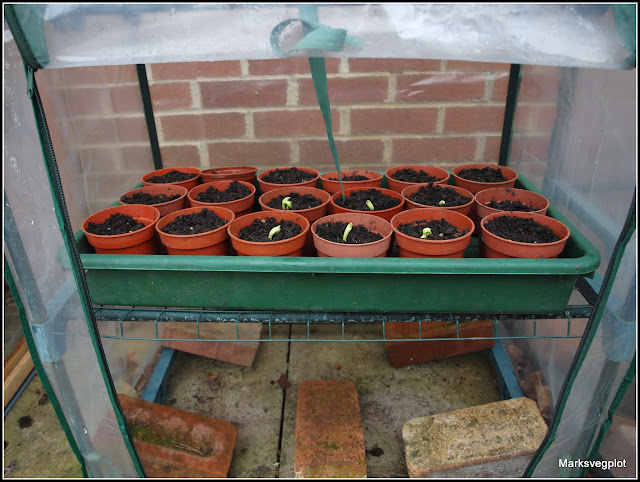 As you can see, I sowed them (individually) in 5cm pots and I have kept them under cover in one of my plastic greenhouses - heavily weighted-down to stop it blowing away, you'll note!). I sowed 18, simply because that's how many 5cm pots fit in the long seed-tray I'm using, but I expect I will only use about 10 of them. It's always good to have some spares though, because some may get damaged by animals or eaten by slugs.

I sowed this batch on February 7th. So far, 7 of the 18 have germinated, but I'm confident that the others will follow suit within the next couple of days. The variety is "Witkiem Manita". 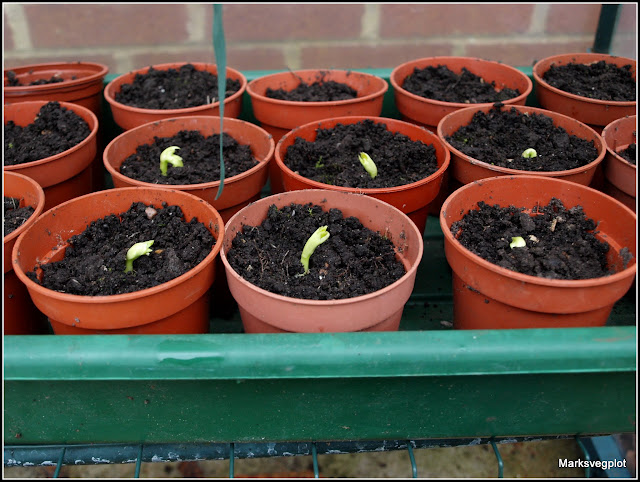 I'll keep them in the plastic greenhouse until they have 4 leaves each, and at that stage I'll choose the best ones and plant them out in one of my raised beds. In about 10 days time I'll sow another batch of a different type, so that they will be about a month behind this first batch.

Meanwhile, the Onion sets are springing into life as well:


The sets were planted on Feb 4th, and the first signs of growth were visible on Feb 22nd.  Not all of them have sprouted yet, but I have no reason to doubt that they will all sprout when they're ready. 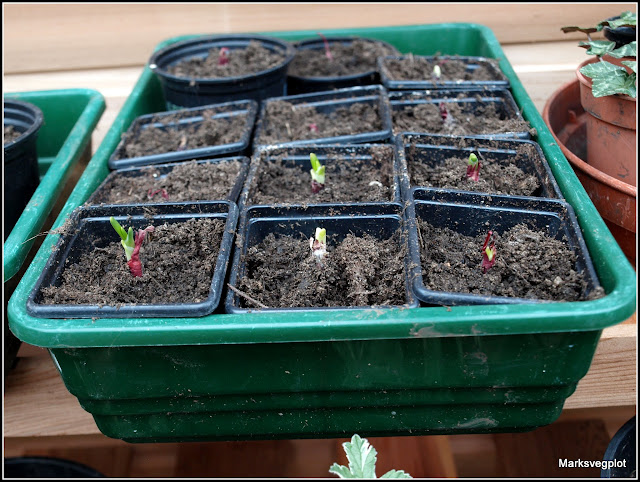 Looks like I need a couple more of those square pots, doesn't it?

Again, I'm getting an early start by growing these Onions under cover to begin with. They are currently in my big new coldframe, which is perfect for this purpose. In due course the young Onions will be transplanted into one of the raised beds. This year I'm devoting a whole bed to the Allium family, and will be growing Leeks, Onions of three types (from sets and from seed), and Spring Onions. If the results are any good, I might have another try with Garlic next year too.

These are my Leeks  - still tiny at this stage.


I germinated the Leeks indoors, but they have now gone out into one of the plastic greenhouses too, because I don't want them to get soft and leggy.

So, despite all my pontificating about "Don't sow too early", things are already kicking off in Mark's Veg Plot...
Posted by Mark Willis at 10:00