Jane and I have just returned from a week's holiday in Portugal. We stayed in a little town in the Eastern Algarve, called Tavira, a place with a long and varied history. 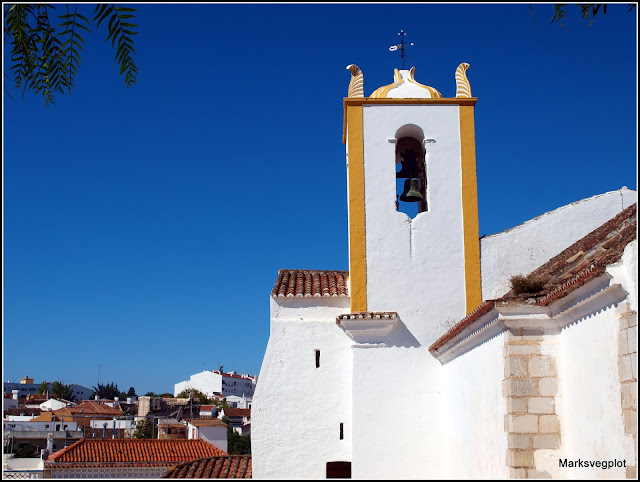 The town is not a typical Algarve resort at all - no nightclubs and all-night revelry (most people seemed to be in bed by 10:00 p.m.!). You even have to make a half-hour trip on a ferry to get to the beach (which is on an offshore island): 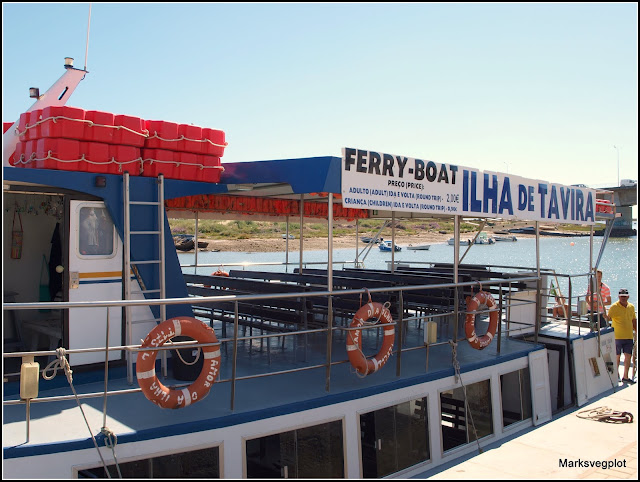 It's worth it when you get there though (the beach, I mean):


We're not really beach people, and although it was nice to visit the beach for a short while we didn't want to stay all day - and potentially get "fried" in the 30C+ temperatures. We were much more interested in exploring the history of the town. Perhaps the best-known feature is the Roman bridge (though no-one is really sure whether the existing bridge is actually Roman). However, they are fairly sure there has been a bridge here since Roman times.


For a town of its size (small), Tavira has a lot of churches! We are not religious, but we do enjoy visiting some churches if they are interesting and/or spectacular - like this one, the Igrecia de Misericordia, with its most unusual blue tile-work depicting biblical scenes:


I loved this one (San Sebastian) for its glowing whitewashed walls and its mass of curves and angles.


Situated at the summit of Tavira's highest hill (closest to Heaven?) stands the Igrecia de Santa Maria - coincidentally just a few yards from our hotel.


This is where we stayed. Although technically a pousada (Google it!), it's officially a five-star hotel. We were amazed to get such fabulous accommodation at a very modest price! 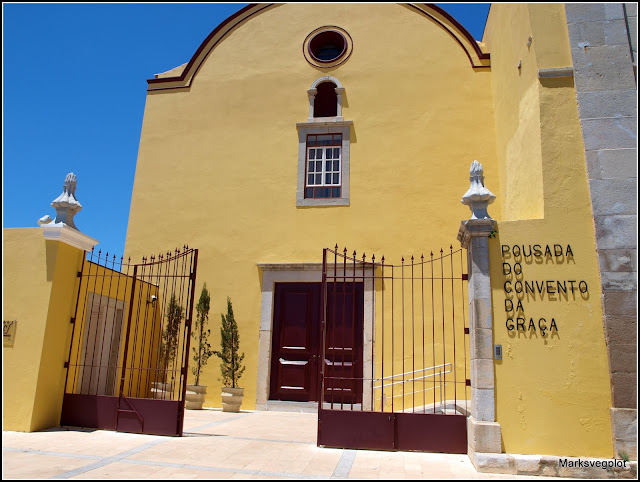 It would be hard to find somewhere more peaceful than this.  Cool, quiet and tranquil, but also luxurious, well-appointed and staffed by some very friendly and helpful people. We ate our breakfast here, in the cloister, to the accompaniment of enthusiastic twittering of Sparrows:- 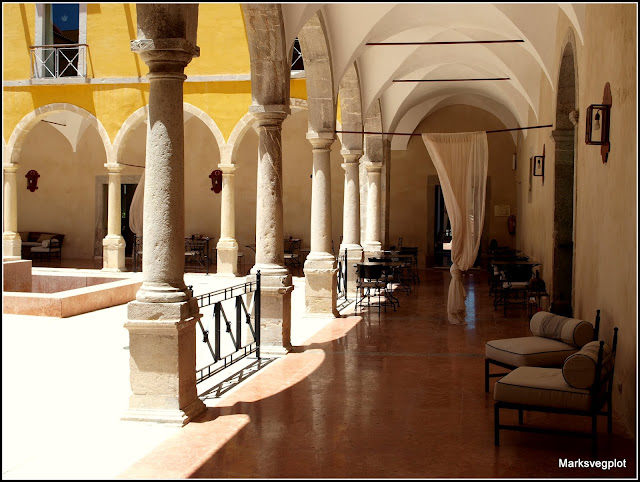 Also just a few metres from the pousada is the Camera Obscura, making use of a disused water-tower: 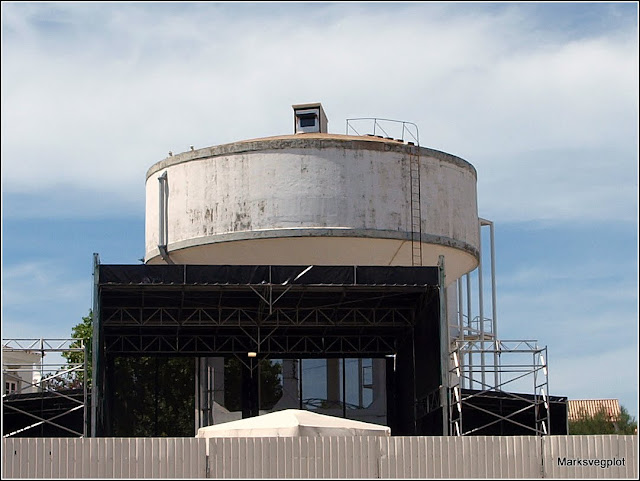 With a simple arrangement of mirrors and lenses, the Camera Obscura gives you a 360-degree view of the town from high above - a sort of real-time CCTV. 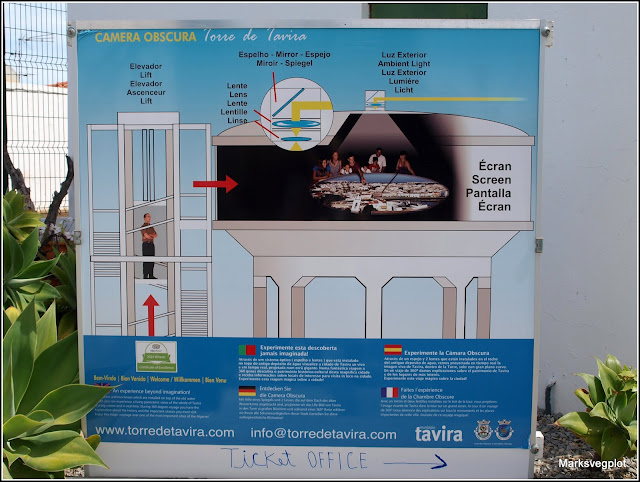 Tavira has a castle, or more accurately the remains of a castle, because it was mostly laid low in the devastating earthquake and tsunami of 1755. Likewise, the ancient walls of the town came tumbling down at the same time, though one or two sections still remain. 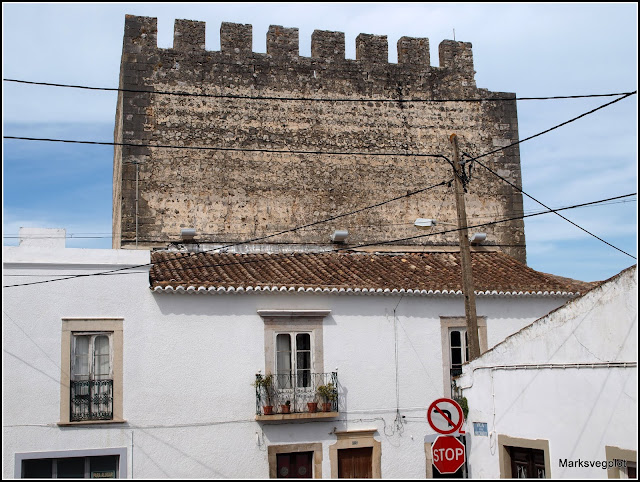 Incidentally, the offshore islands I mentioned earlier also date back to 1755. Prior to that they did not exist. At the time, the tsunami / earthquake would have been a huge catastrophe, but taking the long-term view, the creation of the new islands has been a major blessing, because they attract tourists (and wildlife) in their droves!

Tavira is in many ways a town of contrasts. Ancient and modern; high-tech and old-fashioned; smart and tatty. "Tatty" is probably not the right word though. A better term might be "Shabby Chic", because even the old, slightly faded buildings had a certain style to them:


One of our favourite parts of the town was the municipal gardens, down by the River Gilao. The gardens always seemed peaceful, despite being pleasantly busy. At frequent intervals, buskers played classical and 1970s Pop music. Here we see a Hungarian duo playing the fiddle and the cymbalon: 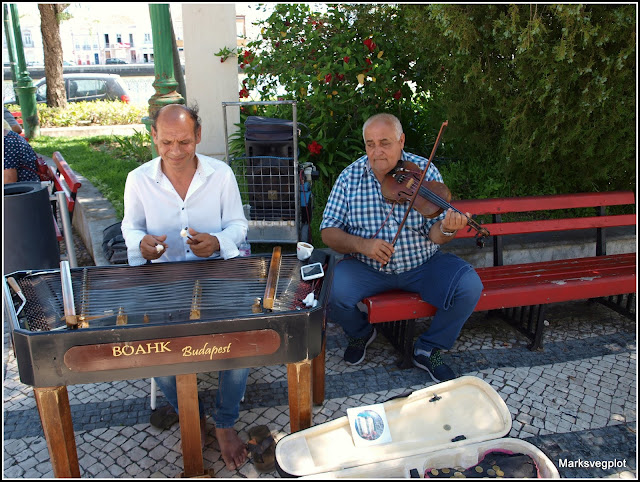 In times gone by, Tavira was famous for its Tuna and Sardines, but these days the fisheries and canning factories have mostly closed, and have been replaced by the salt industry (and tourism). Between the mainland and the Ilha de Tavira there are lots of salt-pans producing "Flor de Sel" (what we in the UK call sea-salt flakes): 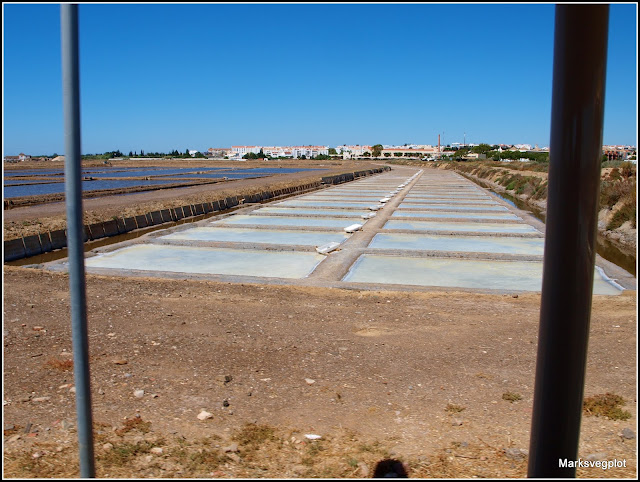 The salt-pans and surrounding marshes were full of birds of many different varieties - storks, plovers, egrets, stilts, avocets etc. We were most impressed to see a flock of perhaps 50 flamingos. I don't think I had seen flamingos in the wild before. 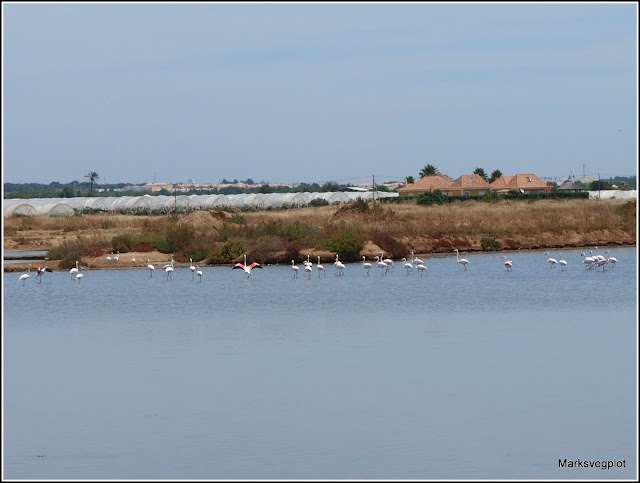 Of course, being a gardener myself, I was very interested to see what plants were being grown in the area. Top of the bill was Bougainvillea, which seemed to be everywhere: 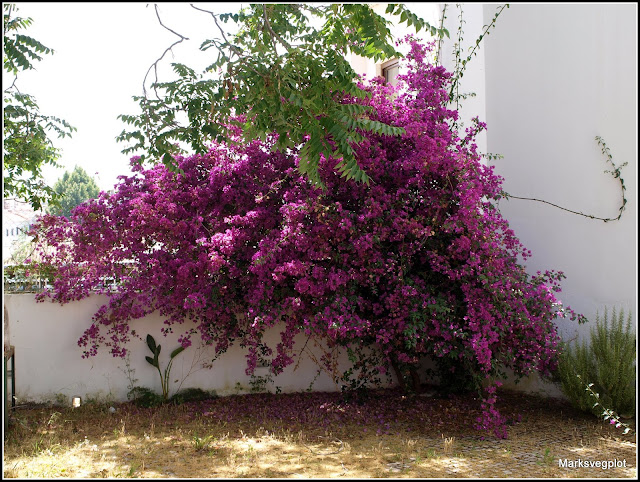 There was also a lot of Lantana: 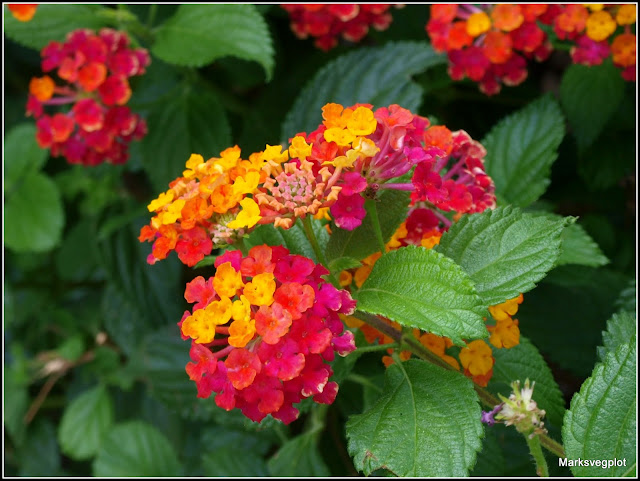 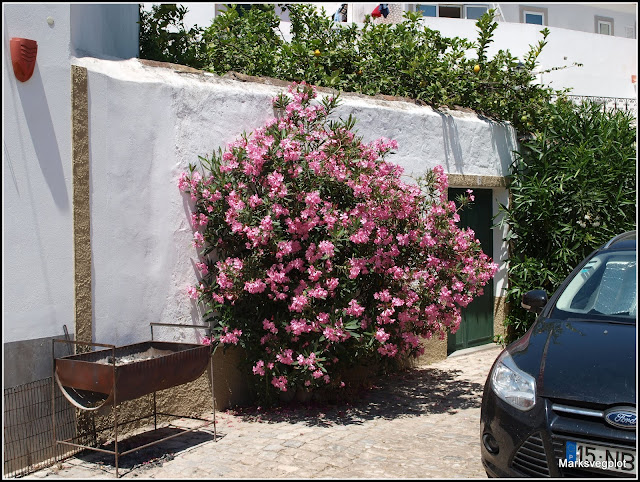 One day we visited the "Mercado Municipal". This is one of the things we always try to do when we are abroad, because the market shows us what real (local) people eat. In Portugal it is evidently fruit, vegetables, herbs and fish: 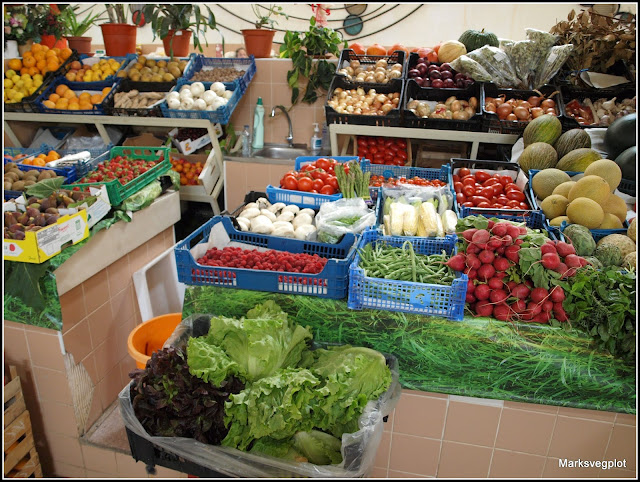 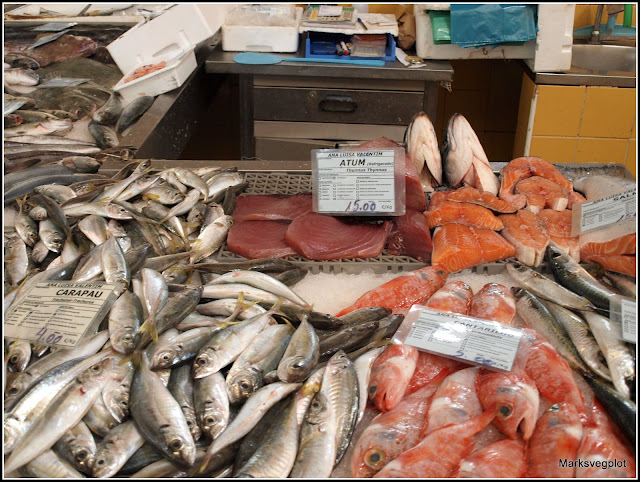 The over-riding impression of Tavira in my eyes is that of the steep, narrow, cobbled streets, streets in which it seemed incongruous to see the modern motor-cars! 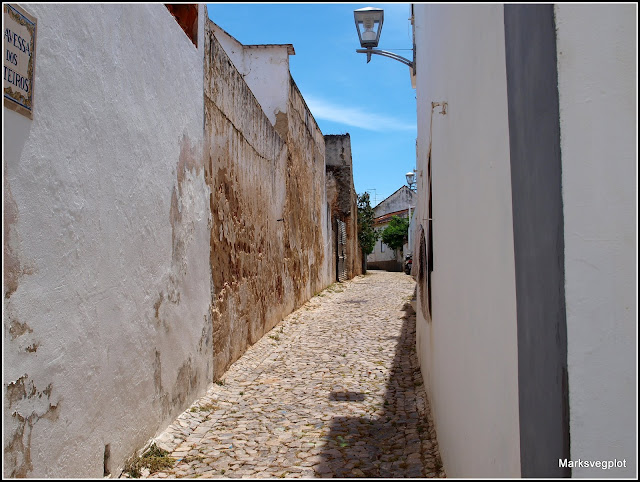 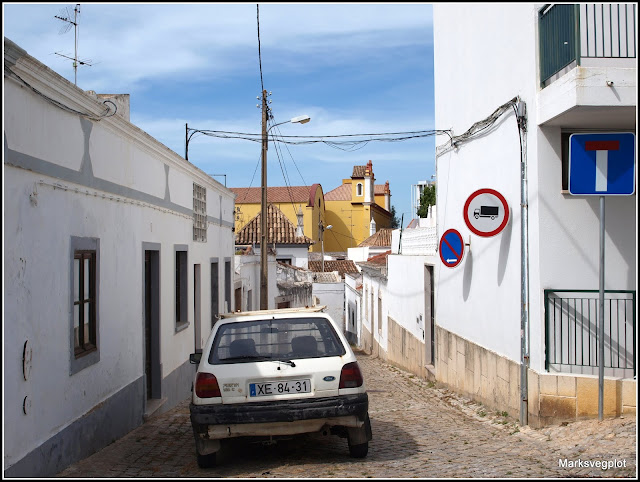 Oh, I nearly forgot - tiles! Tiles are everywhere; on street-signs 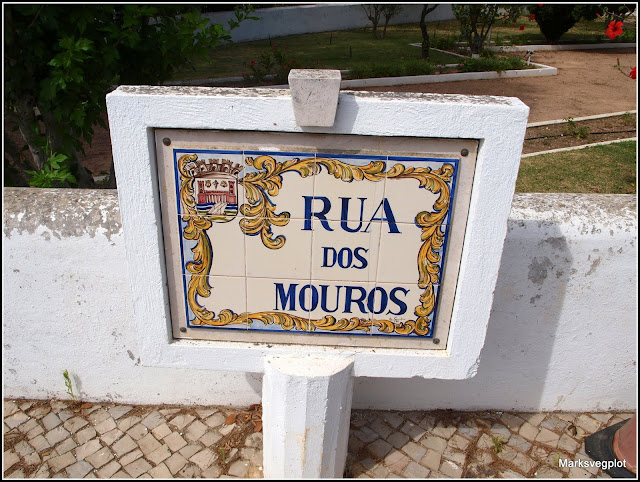 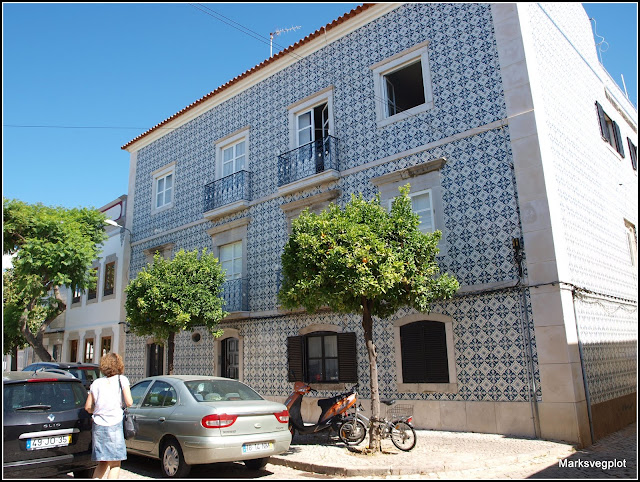 A parting shot: doors. Doors are definitely a major feature of Tavira: 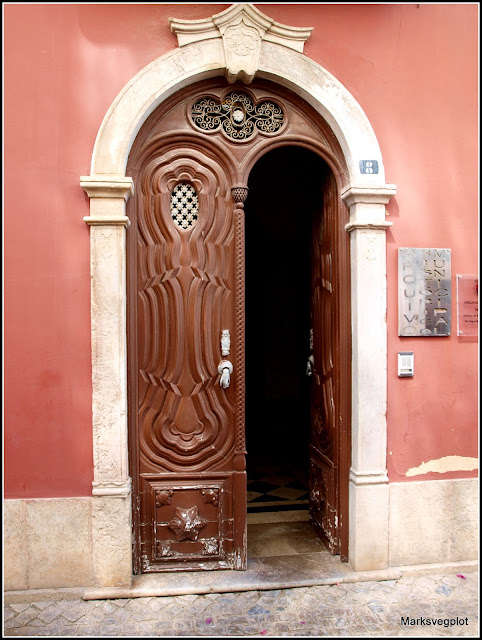 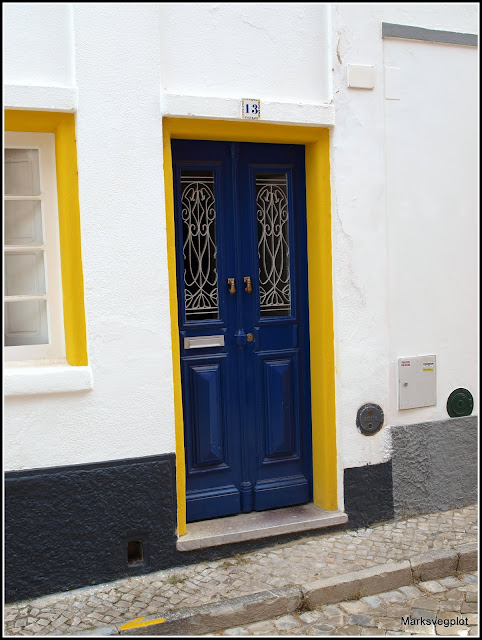 Something that doesn't figure at all in my photos is the food (and drink) of Portugal. We loved it. Normally we get back from our holidays pining for fruit and veg, but on this occasion we did not. We were hugely impressed with not only the quality of ingredients, but also the sheer artistry of the way in which food which could have been very ordinary was presented. Perhaps the stand-out dish of the week was a "simple" bruschetta with tomatoes, avocadoes, and olive oil, topped with a sprinkle of the fabulous local dried Oregano. Simple, yes, but also very special. No photos of course, because I very seldom take photos of my food!

I'm ending this post with my favourite photo of the lot - the water-tower of the Camera Obscura, against the backdrop of that cobalt-blue sky! 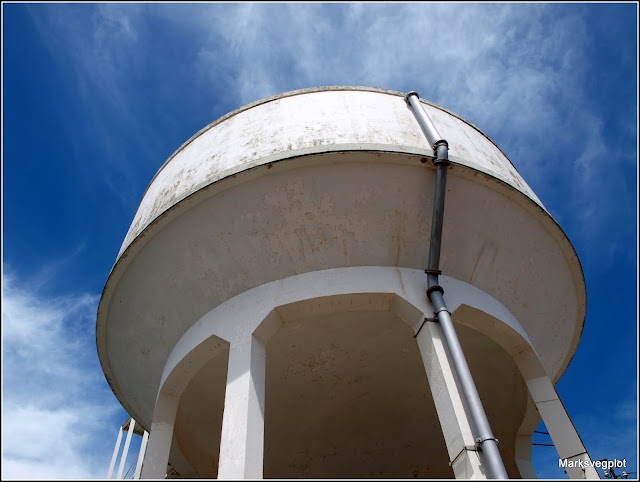