My only harvest this week has been these chillis: 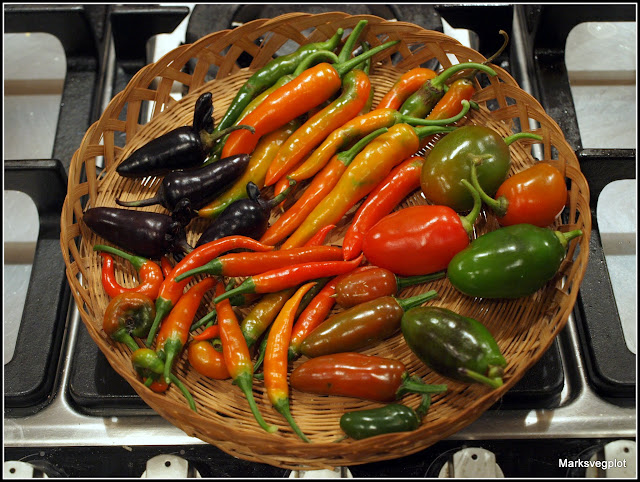 On Monday evening I picked all the remaining fruits from the plants which are still outdoors, albeit inside my plastic greenhouses, because a heavy frost was predicted.


Sure enough, it has been very cold for the last several days, with severe frosts most nights. The chilli plants are now dead, I think, so it's just as well that I grabbed their last fruits while I could.

These are "Ring of Fire". I have been a bit disappointed with them. I grew two plants, hoping that they would be my main crop of culinary chillis, but they were very slow to develop and only produced their first ripe fruit at the end of October.

There were a few of "Serrano".

These are the last of "Turkey, Small, Red".


None of the "Nosferatu" ones have ripened (they go red when ripe), but at least they have developed into some interesting shapes!


That's all I have to offer for this week, so you had better head over to Our Happy Acres to see if anyone else has harvested something more substantial!
Posted by Mark Willis at 12:00