Getting the best from your mini-greenhouse

If you are not fortunate enough to have a "proper" (i.e. glass) greenhouse, then the little plastic ones you can get are the next best thing - as long as you know how to get the best out of them! 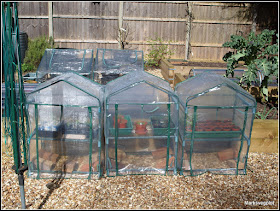 In the early Spring, I use my greenhouses a lot. They allow me to get plants started much earlier than would otherwise be possible. Seedlings grown on that mythical "sunny windowsill" are often a bit under-par because they seldom get as much light as they need - unless you are prepared to keep shifting them round your house to follow the sun!

I keep my greenhouses in different places according to the season. Until recently I had them up against the house, in a sheltered position, because they were protecting dormant pot-plants against the worst of the Winter chill. Now I have moved them out into the middle of my plot, where they get light for most of the day, and direct sunlight for several hours. Later in the year, when strong winds are less common, I have been known to move the greenhouses around the garden two or three times a day in order to get the best light conditions. 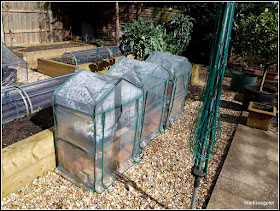 As it happens, mini-greenhouses are designed to be kept against a wall. Most of them have some metal D-rings at the back, which are there to facilitate attaching them to hooks or nails in a wall. If like me, you want to be able to move them around frequently, you will need to consider other ways to stop them blowing away, taking your precious plants with them, because they are very light and have high wind-resistance. I use bricks laid over the bottom layer of rods, as you can see here: 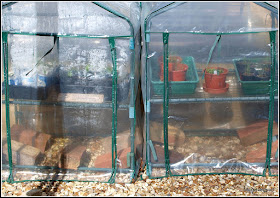 Each one of the greenhouses gets 4, 5 or 6 bricks. Anything less would be tempting fate. If you don't have any bricks, I reckon a couple of paving-slabs or a big bag of compost would work just as well. You'll have noticed that I only use the 2-Tier type of structure, because I found that the taller 3-Tier and 4-Tier ones were very susceptible to damage. I think they would definitely need to be tethered to a wall.

Perhaps the biggest challenge with these things is maintaining the correct temperature inside them. Stood in the shade, a plastic greenhouse will not raise the temperature, though it will certainly protect young plants from frost, damaging winds and heavy rain. However, put the greenhouse in the sun with the door closed and it's another matter altogether.

Yesterday was the sort of day that poses some big problems for a gardener. The forecast said it was going to be sunny most of the day, and I wanted to give my young chilli plants the benefit of a few hours of real sunshine (as opposed to the artificial light of the Growlight House). The outside temperature was cold though (about 4C at 0800 and 9C at midday) and it was very windy too, so I would have liked to keep the greenhouse doors closed. However, with doors closed and in bright sunshine, the temperature shot up to over 35C. 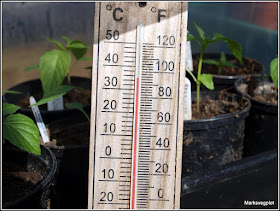 Sure, chilli plants like warmth, but little seedlings can easily be damaged by such high temperatures - especially if they go too quickly from cold to hot, without the opportunity to acclimatise. I had to make a compromise: with the doors zipped-up to the halfway point (and flapping around furiously in the wind!) the temperature was in the mid-20s, which is probably quite comfortable for a little chilli plant.

You know, if I were designing things like this, I'd put a zipped opening in the roof, to allow more flexible ventilation. Heat rises, doesn't it?

Once the sun had moved on during the afternoon, and the greenhouses were again out of the direct sunlight, I went out and zipped the doors to the fully closed position. Now the point here is that not everyone will have the luxury of being able to do such a thing. A working person leaving the house for the day has to make a decision: shall I leave the doors open or closed (or halfway)? They may live to regret their decision! On the other hand, a non-working person like me (whose plot is right outside the back door) can pop outside several times a day to make the necessary adjustments. Ahhh, the joys of Retirement!


P.S. If you want to know more about where to get these things, and the costs, you might like to read this post I wrote last year: Re-vamping the mini-greenhouses
Mark Willis at 12:00
Share